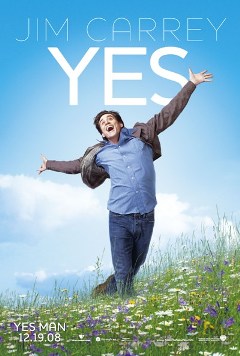 So this past weekend Jim Carrey went back to his comedic roots starring in the movie â€œYes Manâ€. In the movie Jim plays Carl Allen, a guy who doesnâ€™t have a life because he says â€œnoâ€ to every opportunity that comes his way. When his friend Norman (Rhys Darby) informs him that his attitude is going to ruin his social life with his friends, he decides maybe itâ€™s time for a change. He goes to a seminar where the whole goal is to teach people to say â€œYesâ€ to everything, thereby living a more fulfilling life.

Ok so itâ€™s a simple enough plot, guy has to say â€œYesâ€ to every opportunity. With Jim Carrey starring in it, this should be a very funny movie, right? Well it is for like maybe the first 20 or 30 minutes after he starts his new lifestyle. Then it kind of wears down to the point where you just want to say â€œNoâ€ Iâ€™m tired of this movie. The trailer for this movie has a lot of the funnier scenes in it, but after the whole yes premise is out there it got kind of boring. Of course there are complications to saying â€œYesâ€ to everything, and the character finds that out soon enough, but it just got really redundant after the first hour or so. I was highly anticipating this to be the Jim Carrey of old. The wild, zany, outrageously funny Jim Carrey like back in the â€œPet Detectiveâ€ movies. I was so disappointed. Like I said it was funny at first, but then I just got tired and wanted the movie to end.

Is Jim Carrey now to old to be funny? I doubt it. Was it a good movie choice for him? Sure, think of the possibilities they could have ran with, with the premise of the movie. Is this one of Carreyâ€™s funnier movies? Not at all! Not by a long shot! I have to give this movie 1 Yes out of 4. It could have been a lot riskier, hey this is Jim Carrey starring in it. Think about how funny â€œLiar Liarâ€ was. The movie ran 1hour and 44 minutes. It was rated PG-13 for crude sexual humor, language and brief nudity. It was directed by Peyton Reed. It was written by Jarrad Paul, Andrew Mogel, and Nicolas Stoller from source material written by Danny Wallaceâ€™s novel of the same title. It was distributed by Warner Brothers. It was produced by Black & White Production, Heyday Films, Village Roadshow Pictures Entertainment, and The Zanuck Company.

In Life, you should never say â€œYesâ€ to everything, you could end going to see bad movies. Ezo