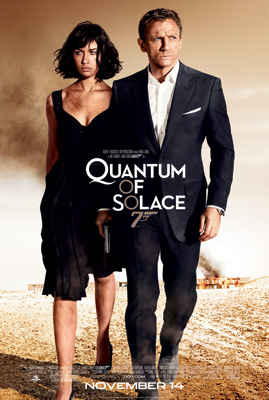 Who would have thought that after 22 James Bond movies, stretching over more than 3 decades that they would still bring the action that they have for all these years. In the new James Bond movie that came out this past weekend, thatâ€™s exactly what it has done. In this one James Bond aka 007 (Daniel Craig) faces an evil business man named Dominic Greene (Mathieu Amalric) who is trying to control one of natureâ€™s natural resources, there by making himself the chief control of it so that people will have to pay him for it. The only thing standing in Bondâ€™s way of trying to stop this madman is his boss M (Judi Dench) who believes that James has a secret motive of revenge in his mind. James believes he was betrayed by his one true love Vesper, and has to fight his urge for revenge in order to uncover the real truth. With the somewhat unwilling help of a strong willed woman named Camille (Olga Kurylenko) who has plans of revenge of her own, they go up against Greene and discover that he has very strong allies in the CIA and in many parts of the world including Austria, Italy, and South America. He is also forging an alliance with an exiled general named Medrano (Joaquin Cosio). Also in the movie is Jeffrey Wright who plays Felix Leiter, who is also an ally of Greene, or does he have his own agenda? 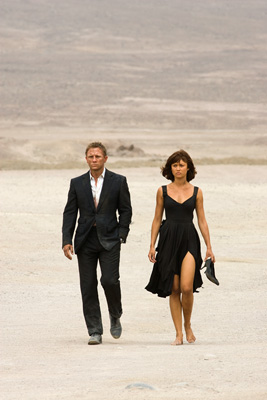 I really loved this movie. It was intelligent, fast paced and filled with action. The action actually came about every ten minutes or so, from the start of the movie till the very end. It was in true James Bond tradition, only this action was actually believable. I really like Daniel Craig as James Bond. He plays James like no one else ever has. Heâ€™s rugged, ruthless, and actually gets his face messed up in fights. Heâ€™s not the normal pretty face James Bond that we have seen in the past. I give this movie 3 shots out of 4. Itâ€™s a great action movie, and by the weekend take of 70.4 million dollars in the U.S. alone, it has people thinking the same way as I do. The movie ran 1 hour and 45 minutes, another rarity in the James Bond franchise of movies. It didnâ€™t need a drawn out story to keep you interested. It got right to the point and moved at a very quick pace. It was rated PG-13 for intense sequences of violence and action, and some sexual content. It was written by Neal Purvis, Robert Wade, and Paul Haggis from the source writer Ian Fleming. It was directed by Marc Forster. It was produced by Danjaq Productions, EON Productions. It was distributed by Sony Pictures Releasing.

Life can be adventurous; donâ€™t let it pass you by. Ezo
Next weeks movie:Twilight