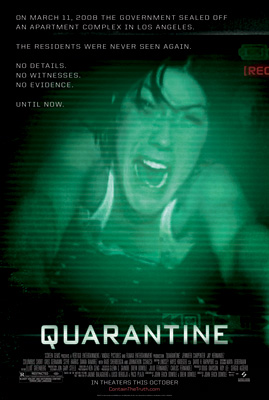 So to kick the Halloween festivities into full gear, this past weekend brought us â€œQuarantineâ€. Itâ€™s a movie about a reality show host named Angela Vidal (Jennifer Carpenter), whose show focuses on the jobs people do while the rest of the city is asleep. This particular night she is following a crew of fire fighters, and the things that happen in the late hours of the evening. Itâ€™s rather boring at first, but then they get a call to go to a building where neighbors have been hearing an old woman screaming in her apartment. 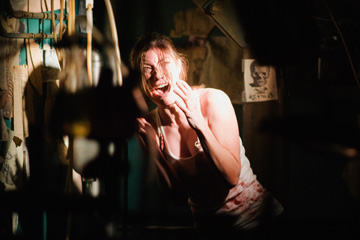 Once there they find the old woman standing in just her nightgown, and forming at the mouth. The police are also at the scene and two cops are there to help out. When they attempt to help the woman, all hell breaks out when she bites one of the fire fighters. As they rush him downstairs, and the tenants are all coming out of theyâ€™re apartments because of all the noise in the halls. They are suddenly stopped at the entrance, which is being sealed off by the police and Special Forces outside the building. Theyâ€re building is being â€œQuarantinedâ€ and donâ€™t know why. To make matters worst the police have been given the ok to shoot anyone who tries to leave the building.

This movie was pretty good. It actually could happen which was why it was so scary. In these times with chemicals warfare and all, it would be quite possible for this scenario to really happen. I donâ€™t want to give much away, because after all it is a horror movie. I give this movie 2 bites out of 4. The movie ran 1 hour and 26mins. Of course itâ€™s rated R for bloody violent and disturbing content, terror and language. Itâ€™s actually a remake, but what horror movie isnâ€™t nowadays. It was Produced by Vertigo Ent., and Andale Pictures. It was distributed by Sony Pictures.