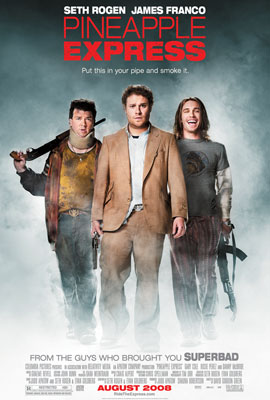 This past weekend I got a taste of some â€œPineapple Expressâ€, and Iâ€™m just now coming down off of it. LOL No but seriously I was out of town and stayed at a hotel that had theyâ€™re internet down, so I wasnâ€™t able to send in my review. So now that Iâ€™m back and I just had to do this review. â€œPineapple Expressâ€ starring Seth Rogen as Dale Denton and James Franco as Saul Silver is the funniest movie to come out this year. Actually itâ€™s the funniest movie to come out since the same producers brought us â€œSuperbadâ€ last summer, another classic comedy. In this movie Dale Denton is a process server who while taking tokes on a joint outside of the personâ€™s house he is about to serve papers on, sees the person kill someone. He panics throws the joint out the window and drives to his dealerâ€™s house. Once there, he and his dealer, Saul get all panicky and paranoid and it ainâ€™t from the weed theyâ€™re smoking. They have every reason to be scared, you see the weed they are smoking is a rare brand called Pineapple Express and Saul is the only one who sells it. 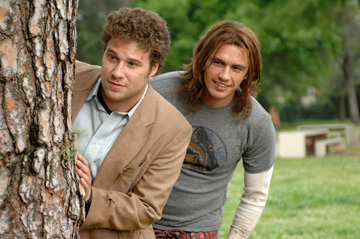 From the very beginning of this movie itâ€™s hilarious, and the jokes continue through out the whole picture. There is action, then a smoke break which leads to some of the funniest conversations in the movie, then some more action, then some more smoke breaks. Iâ€™m sure your have the hint now. This movie is the 2008 â€œCheech & Chongâ€ If you indulge or just like watching people who are high, this movie is for you. James Franco has put himself on the very short list of actors who play pot smokers and have you laughing out of your seat. His thoughts and ideas while high are some of the funniest lines ever put in a pot movie. He really pulls it off. Seth Rogen has done it again; he is on a comedic journey that has yet to have any bad reviews. Since he was in â€œ40 Year Old Virginâ€, he has gone on to help write â€œKnocked Upâ€, and â€œSuperBadâ€, and he also co-wrote this movie. Now if youâ€™ve seen any of those movies you know they are classic comedies, and this one is sure to follow in those results. Danny R McBride plays â€œRedâ€, who is Saulâ€™s weed supplier, and he steals the movie with every scene heâ€™s in. His character is insanely funny as a drug dealer who is somewhat of a punk. This movie was so funny; I canâ€™t wait for it to come out on video so I can add it with the rest of Rogens gems. Seth Rogen is the new funny man of Hollywood, and doesnâ€™t seem like heâ€™s slowing down with the rauncy humor his movies bring. I gave this movie 3 Â½ joints, and I enjoyed smoking it too. LOL Just kidding smoking is â€œbadâ€. Anyway the movie ran 1hour and 45mins, and there wasâ€™nt a dull moment through the whole time. Itâ€™s rated R for pervasive language, drug use, sexual references and violence. It was written by Seth Rogen and Evan Goldberg. It was directed by David Gordon Green. It was produced by Apatow Productions. It was distributed by Sony Pictures.

If youâ€™re going to take a toke of some herb, do it in the security of your home. Ezo
Next weekâ€™s movie: Tropic Thunder