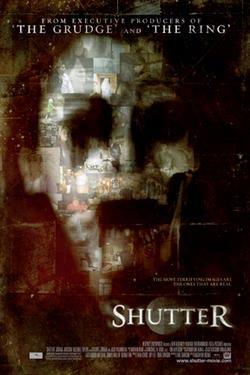 This weekend I went to see another remake of a Japanese horror movie. This one was called â€œShutterâ€ taken from the original title, and Directed by Masayuki Ochiai who also directed â€œThe Ringâ€ & The Grudgeâ€ movies. With credits like this I thought I was in for a real good scare at the movies. Well it seems Mr. Ochiai is losing his touch. Just like the other two movies, the studio took American actors, and put them in Japanese horror remakes, to get an overseas following. The movie stars Joshua Jackson as Benjamin Shaw, and Rachael Taylor as Jane Shaw. Itâ€™s the tale of a newly married couple who move to Japan to live when Janeâ€™s new husband gets a great job as a photographer for a Japanese fashion magazine. On there way to they’re new life while Jane is driving she hits a woman on a deserted road, that causes her to crash into a tree. When she and Benjamin wake up from being knocked out by the impact, they discover that there is no sign of them hitting anyone. Benjamin tells his wife to forget about the whole incident, but Jane isnâ€™t so convinced that she didnâ€™t actually hit a woman. As Benjamin starts his new job, Jane travels around Japan getting a feel for her new life. She starts seeing the womanâ€™s image in almost ever place she goes, like the woman is following her. She tells Benjamin, but he brushes it off, like itâ€™s nothing. That is until he also starts to see the woman, in pictures he has taken and realizes that the woman is in fact from his past. 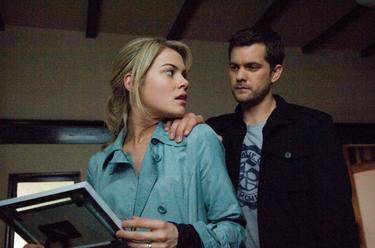 You see Benjamin has a secret which his new wife doesnâ€™t know about. He finally breaks down and tells her the story of the woman, and how he and she were once in a relationship and the woman became very clingy, and a bit crazy. He tells her how he and his two friends Bruno (David Denman) and Ritsuo (James Kyson Lee) came up with a plan to try and get her to stop stalking him, but he left out some very interesting parts of the story. This is a story of a woman scorned, almost just like the movie â€œWhat Lies Beneathâ€ starring Harrison Ford. The movie is not scary at all, and the woman who name is Megumi (Megumi Okina) is not terrifying looking at all but you end up feeling sorry for her. The movie does have one of the funniest endings Iâ€™ve ever seen that climaxes the effects of a clingy woman though. I have to give the movie a 1 camera shot out of 4, because itâ€™s just not up to par with the other movies directed by the same director. The movie is PG-13 for terror, disturbing images, sexual content, and language. It runs 1 hour and 25mins. The movie was distributed by 20th Century Fox. It was filmed in Tokyo, Japan. This remake was written by Luke Dawson.

Life is a movie, be a Star. Ezo