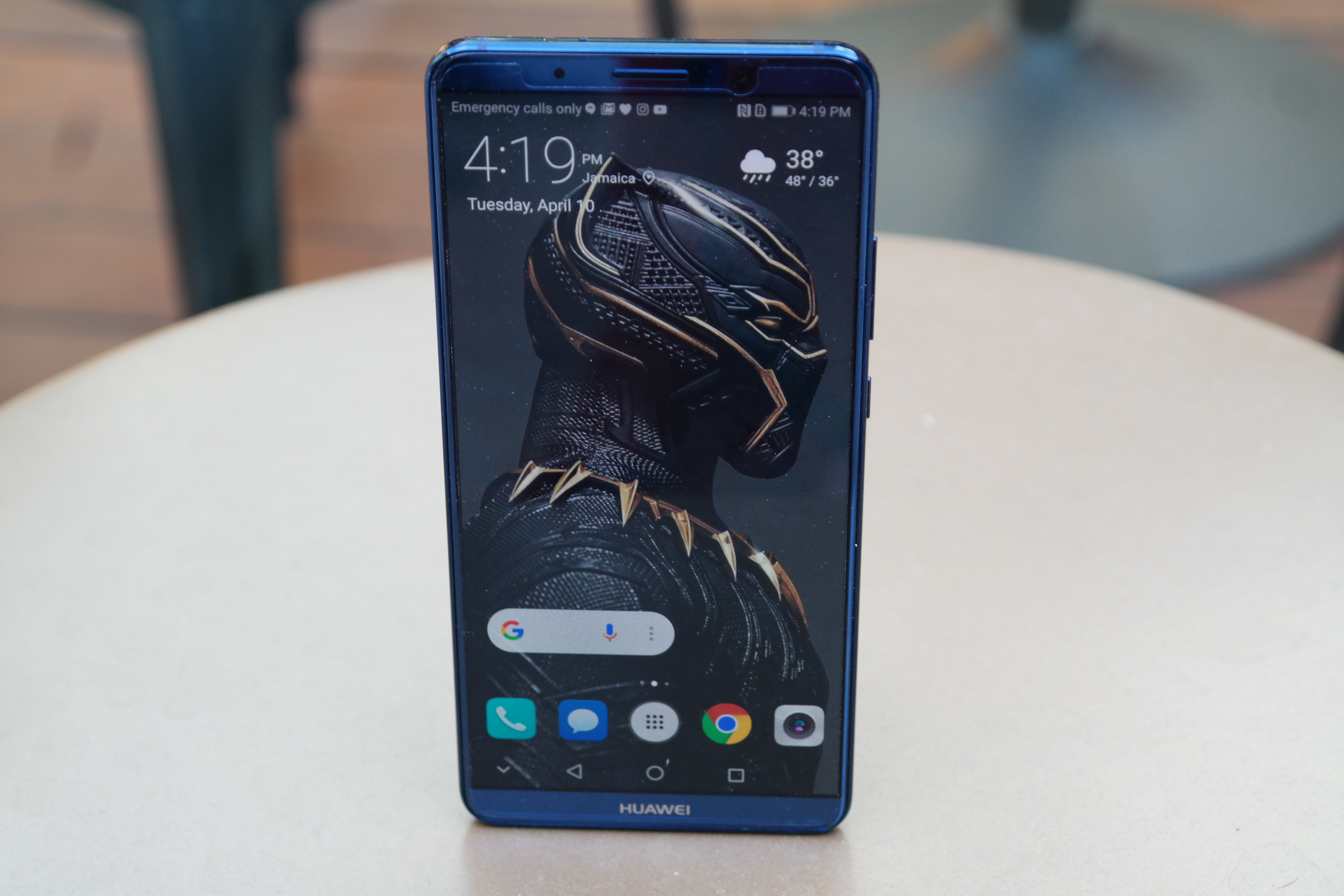 Continuing to climb the ladder of mobile success comes from the company known as Huawei. While they may not be the most recognizable name here in the U.S. they are vastly large all across the globe with their hands in everything tech wise. One of their flagships in their series of smartphones comes from their Mate line. The latest in the Mate line is divided by the Mate 10 and Mate 10 pro the latter which I will be covering here. Trying various Huawei phones will they continue to provide the quality and features they have been becoming known for? By the way they had some pretty cool ads doing CES such as “Wow Way” to help folks remember and pronounce the name.

I have to give it to Huawei, whenever I pick up one of their phones I always been amazed on the craftsmanship and never felt like I was picking anything up cheap. The Mate 10 Pro has a sleek 3D glass body that is covered in Gorilla Glass 5 on the back and forth. Between these two sides of glass is a slight aluminum frame. Even though its encased in glass it doesn’t feel slippery in the hand but can be prone to fingerprints. It’s not as bad as say the HTC U11 which showcased fingerprints like no other.

If you aren’t a big fan of the back glass Huawei has packed a slim silicone case inside the box with the Mate 10 Pro. There is even a screen protector already installed on the front screen. It would be nice to see some of the bigger popular companies(looking at you Samsung, Apple) to start doing this with their fragile devices. 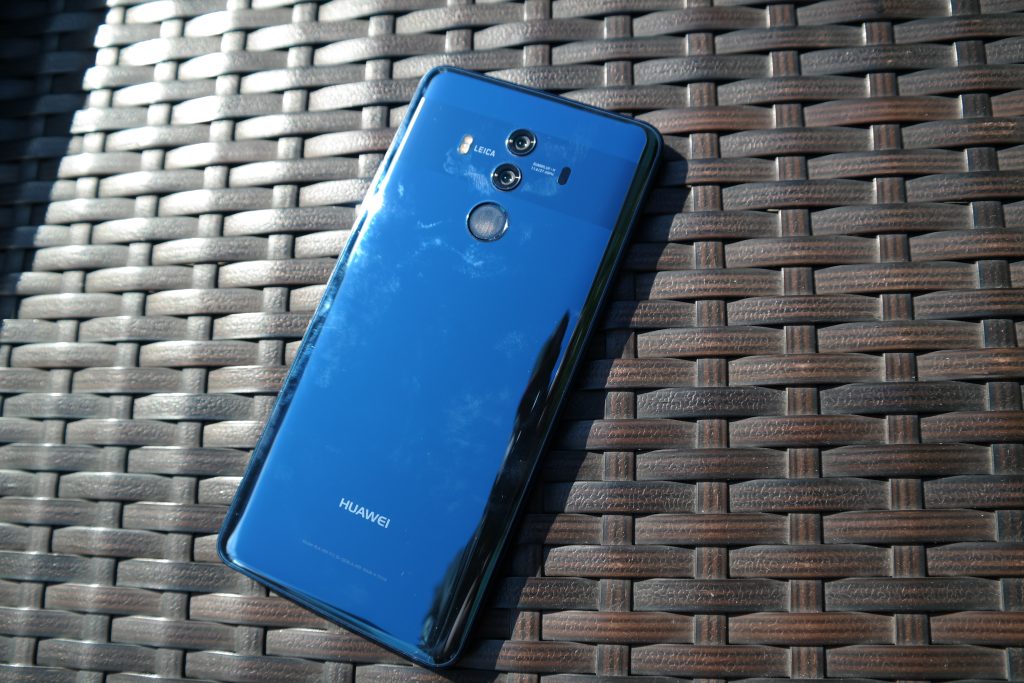 Build wise you are getting Type C with a speaker on the bottom, power and volume toggle on the right while the left side looks flush with a NanoSim tray. Look on the top and you might be surprised to see an old friend which is a IR blaster. There is an app on the Mate 10 Pro that works with it. I have tried it with my TiVo Bolt Vox and had no issues with changing channels and pause/play. I always find IRs useful when you are out and about. Also near the top is the 2nd speaker which isn’t visible as it is working through the earpiece. It is also rated IP67 for water resistance.

The Mate 10 Pro does come equipped with a sim card pin, microUSB cable, and wall charger alongside the pre-installed screen protector and also mentioned silicone case. 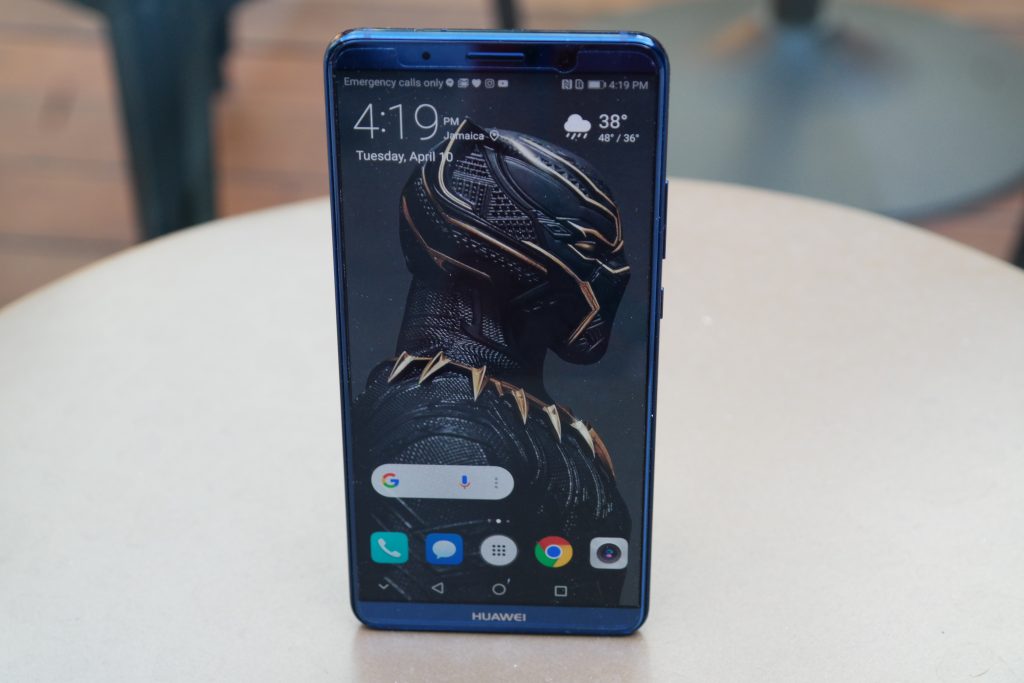 Huawei looks great once you pick it up thanks to its front being 80% compromised of glass. It’s 6” 1080p display with 18:9 viewing and some HDR10 tech thrown in there for good measure. Now using the Mate 10 Pro as my main for a few of weeks I found the display to be just fine even though it was just at OLED 1080p. Of course you are watching that needs a bit more detail you will notice the slight differences. Also for the price that this phone commands I would have liked to see some QHD viewing opportunities. Its OLED screen helps deter some of those woes and looks good outside and gets extremely bright. 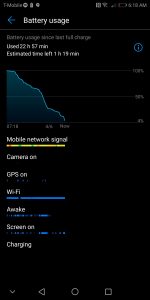 Under the hood Huawei is using their very own AI processor aka the Kirin 970. Alongside that is an Arm Mali-G72 GPU and 6GB RAM. Combining all these together leads to pretty clean running smartphone experience. Huawei’s newest processor is designed to predict usage and be more efficient. When I asked Huawei about no microSD ability they let me know there is 128GB of storage in the Mate 10 Pro. That’s pretty good to be onboard on a smartphone and I haven’t even touched the surface in maxing it. A big winner is the 4,000mAh battery that helps all the Mate 10 Pro stay afloat. The one saving grace in the Mate 10 Pro having a 1080p display is you will get more use out the battery.

I have gone a day or so on moderate usage and playing some mobile games which of course will dial that time down some. Thankfully the Mate 10 Pro charges quickly with its SuperCharge battery feature. There is also a fingerprint scanner on the back that works in a snap and feels in a good position on the phone.

The Mate 10 Pro is unlocked and should work under AT&T and T-Mobile networks with ease. I used it with my personal T-Mobile and used to make calls and do video chat without issue. It has various bands and also supports T-Mobile’s LAA Band for insane speeds if you can find a tower.

The Mate 10 Pro is continues to use Huawei’s OS which is now on EMUI 8.0(Emotion UI) as it has skipped some numbers since last go round. Believe this was more to keep it in line Android’s OS number which is 8.0(Oreo) as well and present in the Mate 10 Pro. EMUI before I felt it was reminiscent to iOS with its icons in folders and such on the homescreen but there is a app drawer so you don’t have to deal with that. I actually like EMUI 8.0 then others might.

There is a great deal of customization in the options and features that this phone is capable of. Dual Apps(Twin App) is available on here as well if you want to use Snapchat with two different accounts and some other apps that work the feature. You can put schedules for the display and everything. I had found prior versions of the OS to bother me but this one I think with navigation you could be a fan. That and there is a Dark theme for the OS that I have grown to like from using it on apps like Twitter.

On the picture taking side is the tale of two lens. Huawei has continued their partnership with Leica to provide you with Dual Lens with one being a 12MP sensor while the other is 20MP monochrome(B/W) both with f/1.6 apertures and OIS on the 12MP lens but not the 20MP portion. With two different sensors this combo can lead to a delightful array of photos depending on what you are going for.

Using the Mate 10 Pro for a while as my main I was able to get some pretty nice shots in various conditions whether it was in a bar or outside. I did tend to favor the monochrome lens on the Mate 10 Pro as I felt the shots came out extremely clean rather than taking photos and applying a filter upon it.

Huawei’s camera software is pretty rich and gives you a heavy array of options regarding the type of photos you are aiming for. Interesting enough though, thanks to the Kirin 970 AI processor a lot of times the Mate 10 Pro would be able to pick up on the scenario and switch instantly especially when it came to food taking photos. I’d point at food and the little knife/fork icon would pop up. Launching the camera is pretty fast tapping the volume down 2x but I think i got used to most using the power button for that option.

I didn’t use the front camera very often but if you are interested it has a 8MP sensor. I wasn’t a big fan as sometimes they would come out a bit bright or take a moment to adjust to get that right photo. They don’t look bad though and I imagine if you like selfies you will get it tweaked right.

Using the Mate 10 Pro over the past few weeks I can see how it’s definitely one of their best flagships. It features a stellar battery life, great camera and awesome build quality. While I don’t mind the EMUI software it could deter those that love pure Android but may catch a couple of iOS converts. While it does have a IR blaster for its price point of $800 I’d like to see a higher resolution, with a headphone jack and/or wireless charging for some. It does slightly undercut some of the most popular android phones its size such as the Pixel 2XL which is $850 and even the Galaxy S9+ which is $840.With no U.S presence(since the AT&T fallout happened last-minute) it makes it hard to attract users dedicated to their favorite brands.

I have seen the Mate 10 Pro hover around the $700(or less) mark on Amazon lately as well if that helps. It’s a powerhouse of a smartphone and has most of the bells and whistles you need minus a couple of omissions. I think the $650-700 range is the sweet spot for the Mate 10 Pro.