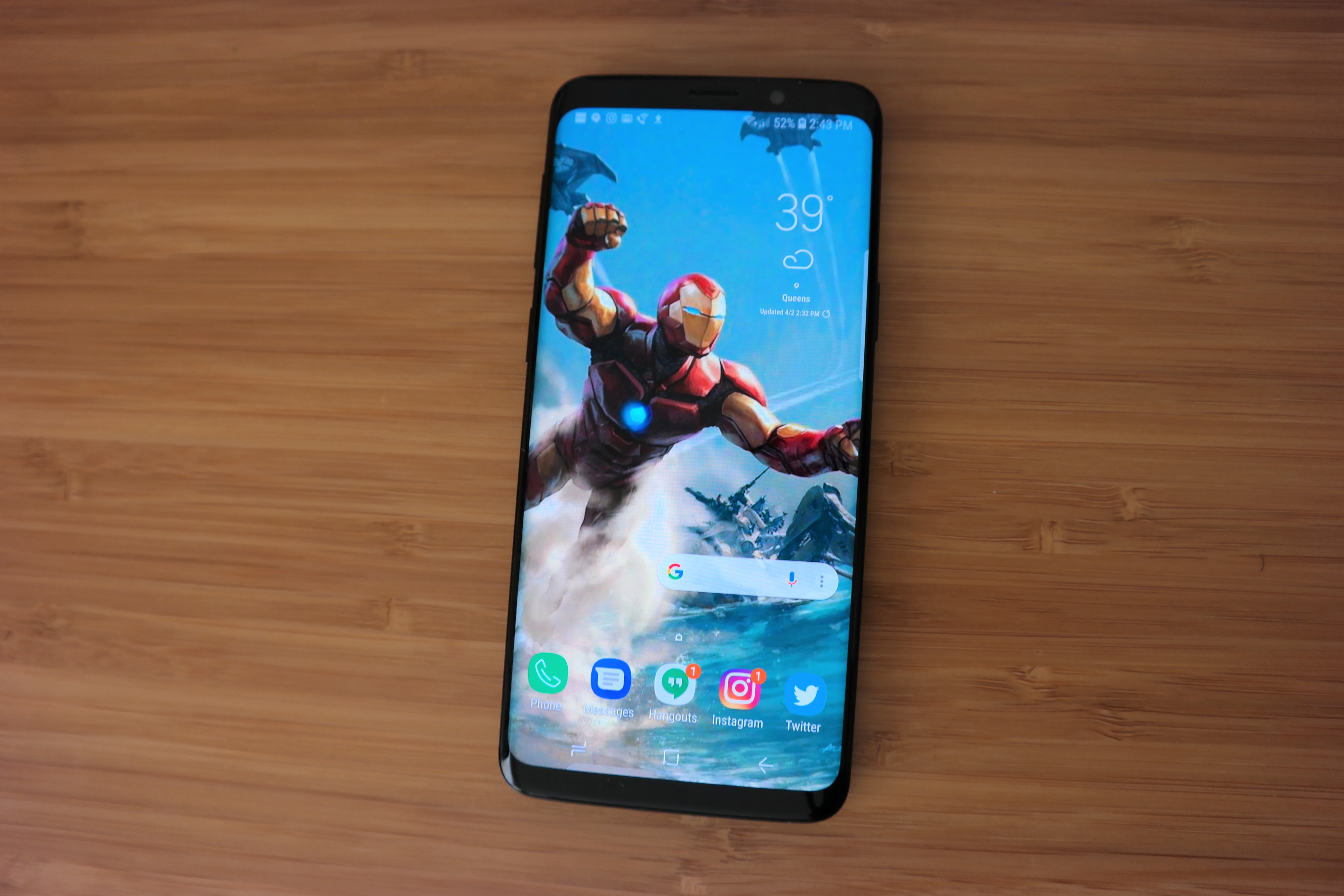 Samsung has been touting the Galaxy S9 series as the phones to have you “reimagine” everything thanks to their newest camera features such as low light and recording some content in the slowest speeds you may have ever done in your life right out the box. I been using it for the past few weeks and will let you know if it’s worth the upgrade.

Usually when Samsung drops its next flagship you expect to see a gradual design change but in the case of the Galaxy S9 it’s very similar to the Galaxy S8. Still featuring the same curved glass design with aluminum borders wrapping around the borders of the phone. Headphone jack and Type C ports are still on the bottom with volume rockers and Bixby on the left while Power utilizes the right side. The most visual differences will be speaker grill on the bottom as the Galaxy S9 has “stereo speakers” and the Iris scanners have been repositioned and less visible. 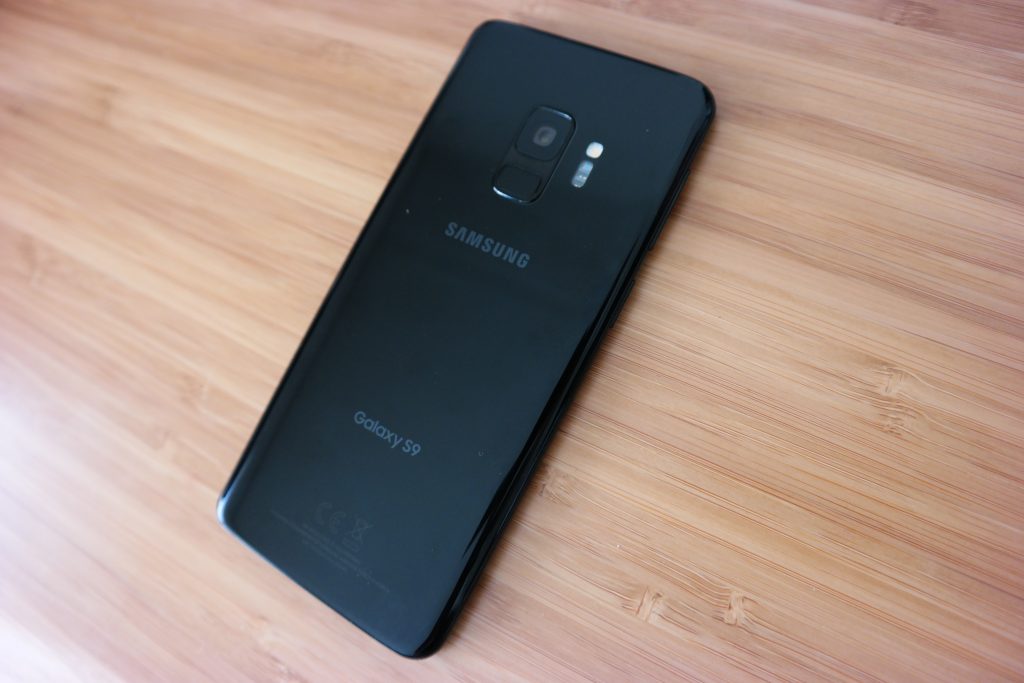 One of the more welcome changes is the fingerprint scanner being moved under the camera and a bit more thick space in between so you don’t accidently wipe your finger across the camera lens. 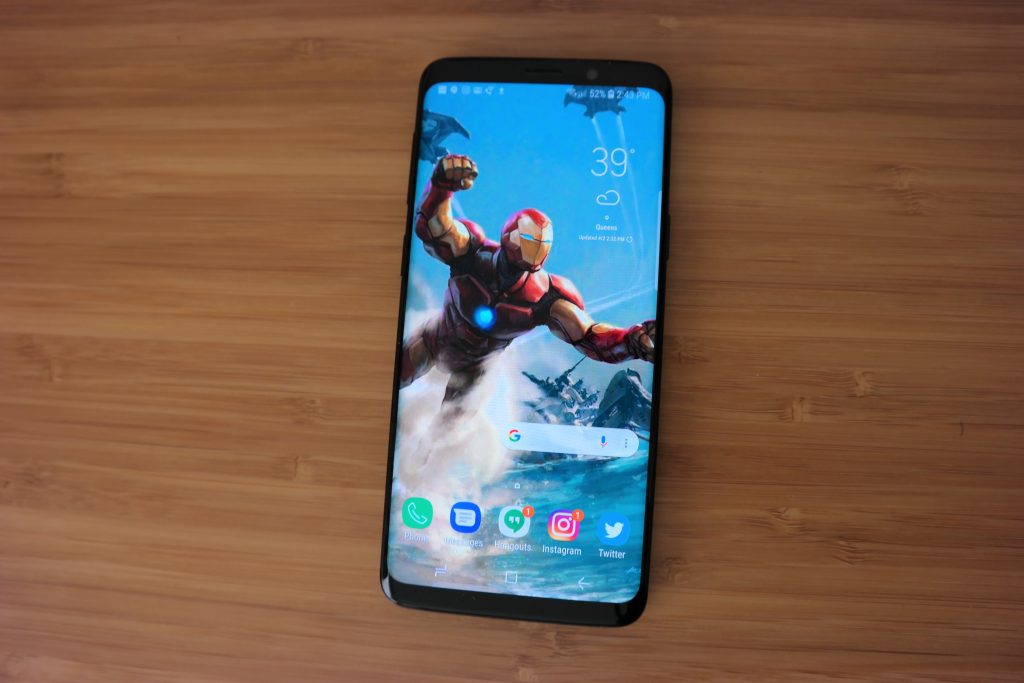 Like the design Samsung did not make changes in the screen department either. Like its predecessor you are getting a 5.8” Super AMOLED display with a 18:5:9 ratio giving you their “Infinity Display”. It results in a crisp Quad HD viewing experience with 568 ppi. Whether its gaming, watching content or taking pictures the colors looks magnificent. As I have said about the S8 series and Note 8 it’s hard to find any glass looking better.

On the outside you may not see much but underneath is where the most changes have been made. The Galaxy S9 has a Snapdragon 845 processor , Adreno 630 GPU, 4GB RAM, 64GB built-in storage and 3000mAh battery(same as S8). There is still quick charging and wireless charging capabilities if you care to utilize them. I have found myself coasting through the S8 battery pretty fast but thankfully it gets juiced up pretty quick.

Samsung has finally stepped it up in the audio speakers department packing the Galaxy S9 with “dual speakers” tuned by AKG but also having Dolby Atmos to give you that surround sound effect. This is a big deal if you don’t like to be tied to your headphones and maybe want to show some friends or family some videos you have. Sound quality has vastly improved as I had the S8 and S9 side by side running videos and trailers at the exact same time and I could hear and feel the difference.

Out the box you get Android’s latest 8.0 OS aka Oreo. TouchWiz is of course still present but runs pretty decent on the Galaxy S9. Over the past few weeks I didn’t notice much lag or hiccups. I use the “Game Mode” feature on it a great deal and like the emphasis it puts on your mobile gaming experience. I still occasionally experience seeing the same app opened two times in my “Recent” tab such as Hangouts but it im not having the same app failures as i did with the S8.

Samsung has greatly improved their Facial Unlock by combining Iris Scan and Facial Unlock together giving you Intelligent Scan. I found this working extremely good in low light settings. Reminds me of how I use Windows Hello on my Surface Pro. I do utilize the fingerprint scanner on the back which has been repositioned. I’d prefer it in the middle like other Android devices have it but I guess it’s better than last time.

Also this year is AR Emojis which is Samsung’s take on Apple’s Animjois. These look more “human” letting you map out your face and then getting access to a host of gifs you can send out to virtually anyone. I could see some people having fun it and I tried it a few times.

One hidden feature in the Galaxy S9 i like is the ability to make your videos lockscreens. Depending what you have on your phone you can throw together some sweet animations.

While the Galaxy S9 has made small improvements in other areas its biggest upgrade and focus is its camera lenses. There is a 12MP shooter like the S8 but the aperture is vastly different. It uses F1.5 for low light aka darker views while F2.4 is used for daylight shots. The S9 basically lets more light into the lens to have achieve some pretty nice low light images. You can check some out mixed in the gallery below.

Another big thing Samsung has been pushing with the S9 besides its lowlight abilities is how slow do you want to capture video. On the prior devices you were able to achieve about 240fps but on the S9 you are pushing 960fps. Two things about Super Slo-Mo is you need to have great lightning or a area with great light featured and videos are only recorded up to 720p. I think it’s a sweet feature if you can find a subject to use it on but nothing you can use on the daily.

I been using it for the past few weeks now and it’s been so far so good. I have used it for everything from Samsung Pay, playing some Dots & Co, making calls and so forth without issue. This is an unlocked Samsung Galaxy S9 being used with my own account on T-Mobile. Call quality has been good as I have done at least 30 min calls at a time via headsets such as the IconX. The 5.8” size is cool but I would like to get my hands on a S9+ as I’m used to bigger phones and used the Note 8 a great deal before this.

Samsung has been some nice software improvements on the S9 and I haven’t run into much issues. TouchWiz and Android Oreo have been playing together nicely. While the Galaxy S9 is pretty identical to the Galaxy S8 on the outside its hardware changes especially to the camera and its speakers are a much needed and welcome change. If you have a S8 I wouldn’t suggest the jump to the S9 but anything below that I’d say it’s worth the move.