Gaming is bigger than it’s ever been. It’s far surpassed what I ever thought it would be as a kid growing up in the 80’s. Personally, I started off with the Atari 2600 and when Nintendo came out I didn’t think it would get any better. I was wrong. Super Nintendo and Genesis came. Turbo Grafx, the Gameboy and Game Gear, Playstation 1, Nintendo 64, Dreamcast and Neo Geo all followed until we got to the point where we are now.

It’s 2017 and the games these kids get to play now are just incredible. They look great and play great. I love it because I’ve seen it from its infancy. Millennial children unfortunately are largely unaware that there was gaming before now. To be fair, this is how it is with all new generations. It’s our job as elders to teach them.

Recently, I stumbled upon a book that gives kids a path to the games that they should play if they consider themselves gamers and it’s aptly titled “101 Video Games to play before you grow up”

The book was written by Ben Bertoli who is freelance writer that I know of from his articles on Kotaku.com which is one of my favorite gaming websites, so if you need to familiarize yourself with his work, you can check him out HERE. That said, you can tell in reading this book that the games that he suggested in this book have been played by him and enjoyed. It’s a balanced mix of older games and much more recent games. It’s laid out as a journal/guide. You get a brief synopsis of each respective game, the platform it can be played on, genre, parental rating, when it debuted and the publisher of the game. You even get suggestions as to what you should play next in the series if it exists or something similar. At the bottom of every page there’s a checkbox to check it off of your played list, a set of stars you can fill in for your personal rating and notes to document your experience current or afterward. It 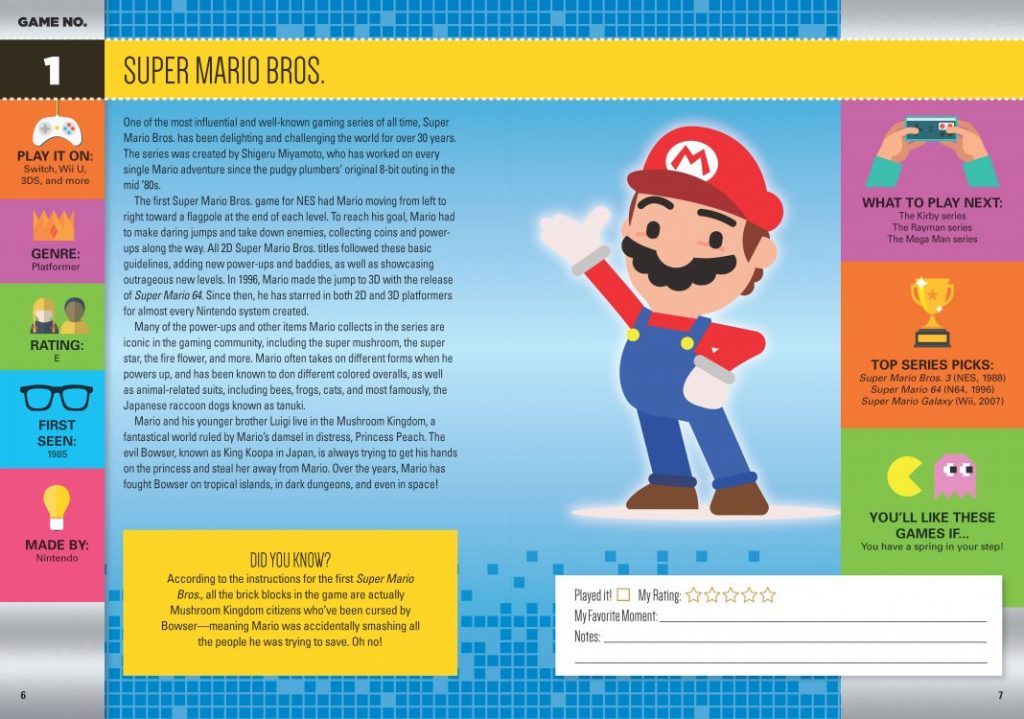 What’s most profound about this book is how much it reminds me of what gaming was like for me as a kid in the late 80’s and early 90’s tackling game conquests and writing down long ass codes and keeping it all in a notebook. There was no internet, no google, no cheatsheets. Just what you remembered and what you wrote down.

If you’re raising kid gamers, I think it’s super important to remind them that there was a time before Xbox Live and the Playstation Network. “Retro” gaming is becoming more and popular and the kids nowadays really seem to like it but may not have an understanding of the origin of the look and play style that those games use.

This book is written by an elder gamer for younger gamers and while we can debate what games should have been in this book and shouldn’t have been in this book, we can’t debate the intent and purpose of the book. It’s a book that no kid who claims to game won’t see as a challenge to try to play them all. I mean, why not?

You can pick this book up on Amazon for just under $8 bucks. Grab it HERE. Grab one for the kid gamer at home and one to collect. I love this book. It’s dope. Me and Ben gotta talk though, There was no Toejam and Earl, no NBA Jam and a few others. I’m kidding. Enjoy the book.