It’s that time of year when the smartphone game begins to pick up and every phone manufacturer comes out with their new flagship hoping to introduce something new to beat their competitors to the punch.

Last year this time, LG came out with their newest flagship the G5. It was the follow up to the well done LG G4 and it was for lack of a better word…unique. The G5 wasn’t a horrible phone. It was just guilty of having a bit of an identity crisis. LG wanted to be progressive in trying to make the G5 unlike any other phone on the market. They succeeded in a certain respect by making the G5 a semi-modular smartphone. The problem was that there were too many accessories for the phone in a world where people tend to want to carry less. That, coupled with a not so great design and shitty battery life made the G5 a phone to forget.

Since that time, LG has gone back to the drawing board, focused and created what I believe is going to be my favorite phone for this year with the G6. Even more so than the Galaxy S8. I know it’s a bold claim since the S8 isn’t available just yet but I say that having used the G6 for a little more than a week. I know I’ll like the S8 a great deal but I’m not sure I would hastily switch. My overall first impressions of the G6 are really good.

Instead of trying to break the mold with NASA level design. LG decided that it would be best to focus on minimalism with the design and make the overall experience the selling point. With that decision, we got the G6. It’s a simple design and it’s beautiful. The design of the G6 is kind of an ode to smartphone design just a few years back. Rectangular with curved and chamfered edges wrapping around the screen. Tactile volume up and down buttons on the left side with the SIM card and microSD card slot discreetly embedded on the right. Glass back with the dual cameras on top and the fingerprint reader neatly and perfectly placed below it. Type C connector and a single speaker. Simple.

The G6 has almost the perfect thickness for a smartphone at 7.9mm. I hated it when smartphones went on a diet and every phone manufacturer was trying to make their phone skinnier than the next guy and all we ended up with were skinny phones that you could barely hold in your hand that you must charge several times a day because the battery life sucked with those little ass batteries. LG made sure that the design of this phone could give us everything we needed, grip, thickness, screen size, battery life. That’s what this design affords us. 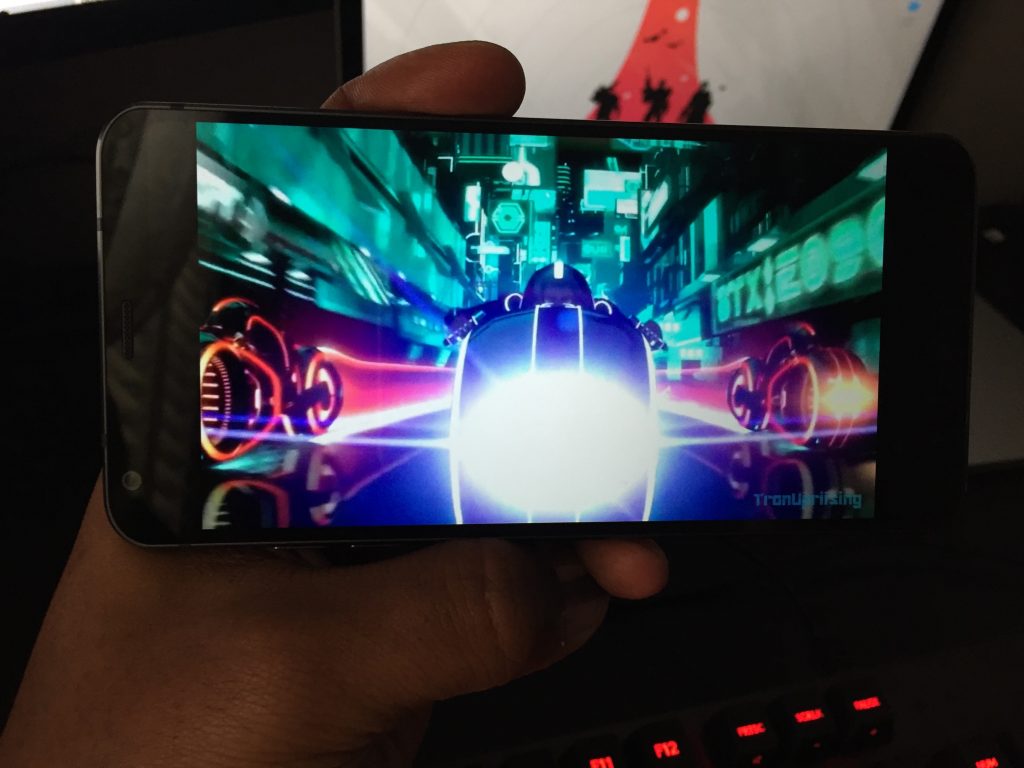 The screen on the G6 is first thing you notice. After all, there’s a lot of it. It has a screen size of 5.7″ which seems pretty standard but with an aspect ratio of 18:9 or 2:1. This gives you a longer screen, practically no bezel on the sides and more screen real estate overall and on the G6 it would appear that the screen is almost end to end. In fact, almost 80% of the phones’ body is screen. LG managed to accomplish all of that and not make the phone bigger than it needs to be.

Spec wise it’s an IPS LCD screen with Gorilla Glass 3 and a resolution of 2880 x 1440 with Dolby Vision. At full brightness, you can really see just nice the screen is. The screen is a great size for content viewing although most of the content you’ll view isn’t going to be formatted to the 18:9 aspect ratio. It’s not a big deal at all because you do have the ability to stretch your content to fit the screen for some video but not for others and if you’re using the G6 in landscape mode you’ll just have to deal with borders on both sides. Over time more phones are going to be using this aspect ratio or similar so you can expect apps to match it and more video to be scaled at that aspect ratio. When you do watch video that fits the screen, it’s really great to watch. The screen that the G6 has is on par with any screen that you can put on a phone today. Even the very subtle curved edges at each corner of the screen make it look really cool.

LG’s approach to the software this time around was to make a software skin that suits the look they want but be minimally intrusive to the Android OS. They succeeded. It isn’t flawless by any means but they work well together. The G6 is running Android 7.0 Nougat and makes good use of the Snapdragon 821. The performance isn’t top notch but it is snappy for the most part. The problem isn’t the 821 chip, it’s that the software doesn’t offer much in terms of what you can do. The phone does what it needs to do and really nothing more. It’s a little disappointing considering that the G6 is supposed to be far different from the G5. I would have liked to see LG optimize the G6 to work better with the software. Nothing to really see here.

The camera on the G6 is easily the best feature. LG has put a great deal of tech and pride into their cameras. The rear facing camera is arguably one of the best cameras on a smartphone. The rear camera on the G6 is a Dual 13 MP (f/1.8, OIS, 3-axis, phase detection AF) + 13 MP (f/2.4, no AF), dual-LED flash. It’s a slight change from the G5’s 16MP dual cameras. Nevertheless, the G6 camera gives you great shots in auto mode and the manual mode is even better if you want to be in more control of your shutter speed, aperture and ISO. The wide-angle lens is probably my favorite feature of the camera once again. I loved it on the G5 and the same applies here. I think since I’ve had the phone I’ve used the standard format for taking pictures once or twice. Wide angle rules.

The G6 camera also has a good video camera allowing you to shoot video up to 1080p at 60 frames per second. Just like the still camera there is an auto and manual mode for video and strongly suggest using manual mode if not for anything else, do it for the wide-angle feature.

Everything else about the G6

The G6 is a solid phone and contrary to what people may say it can compete with the S8 in terms of all around phone. The G6 is very user friendly and simple to use without being bogged down with gimmickry. What I spoke about were the main elements of the G6 but there are a few more things about the G6 I didn’t mention.

Water Resistance – The G6 is IP68 water and dust resistant. Dropping your phone in the sink or the toilet isn’t a cause for panic anymore. It’s not really a feature but it’s good to know that it won’t be a problem if your phone gets wet.

Battery – I don’t like to go into a diatribe about battery life usually because most people want to know if they can get through the day with their phone without having to constantly charge it. In short. Yes, you can. The battery life is much improved from the crappy battery life of the G5. LG packed the G6 with a 3300 mAH battery and personally I’ve been able to go through a whole day perfectly fine without having to worry about charging. I keep my phone at 55% brightness with average use and if I leave my house with 100% battery and go through a whole work day I’ll probably get home with 35% battery life. Not bad for a whole day of use. Battery will not be a problem with the G6. If there is a drawback it’s that the battery is no longer removable but I don’t mind that if the battery lasts all day and neither should you.

Color options – There are two color options. A blueish gray silver or Ice Platinum as it’s called (yes that’s a color) and black. Get the black.

Sound – The LG G6 has a single speaker on the lower right hand side and it delivers some good sound but not great and easily muffled. Listening to music or video is decent but use headphones or hold the phone to your ear. The US version of the G6 isn’t what it’s Korean counterpoint is in terms of sound overall. Their version gets a better 32-bit HiFi Quad DAC. Oh well, you can’t win em all. Despite that, the sound is good and it’s not disappointing but your sound will depend more on your headphones than the device itself.

Storage – The G6 comes with 4GB of RAM and 32/64 GB internal storage options with a micro SD card slot that supports additional storage up to 256GB.

If you do end up going with the LG G6 as your personal phone it’s not going to be something, you’ll regret. While the Galaxy S8 may have the better design and all the bells and whistles in the software the G6 remains logical. It’s easy to use and it’s fairly snappy. Watching video is a great experience granted you can find video to fit the screen (the S8 will also have this problem). The camera is top notch, the screen is beautiful and crisp, has a great battery and it’s easy to hold in the hand. The software leaves much to be desired but at least it’s not overwhelming and complexed. I use the G6 as my daily driver and I’m not so sure that I would be in a rush to switch to the S8. I think anyone that buys this phone will probably feel the same way. Kudos to LG for going with what works. Sometimes that’s all that’s necessary.