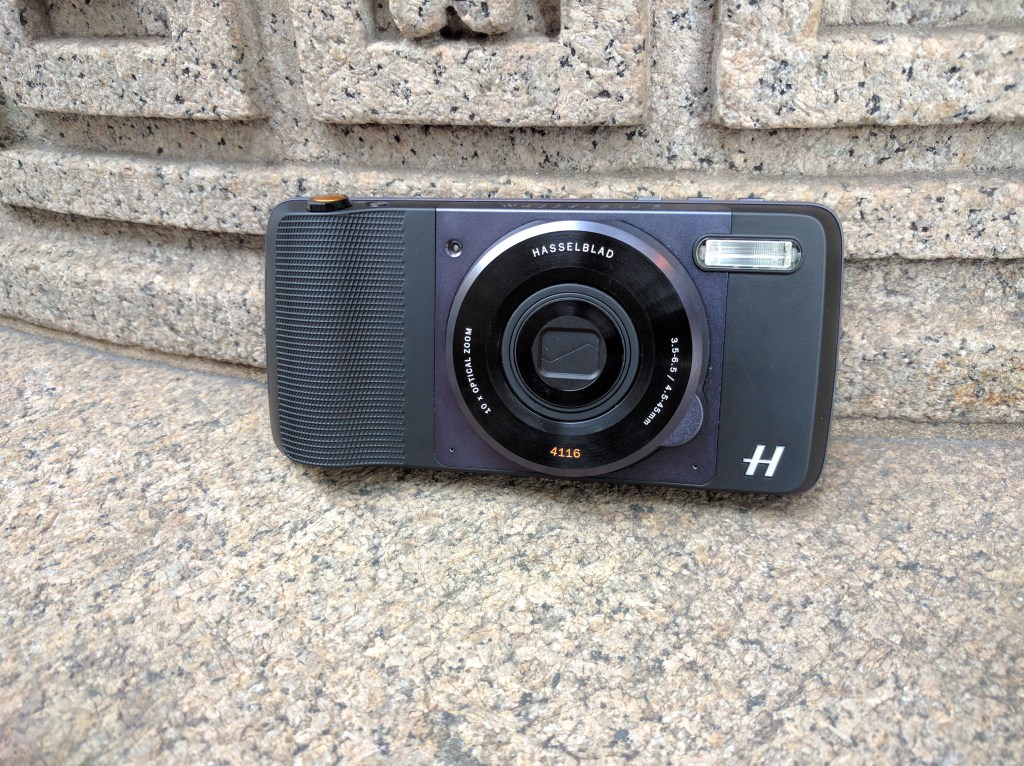 When Motorola showed off their Moto Mods in the middle of the summer one thing that seemed missing was a camera option. We seen it with the LG G5 and also attachments on other devices. Motorola has teamed up with world-renowned camera company Hasselblad to create what they are calling the True Zoom Lens. Some are saying why do I need a camera lenses attachment when my Moto Z is already capable of taking photos. You be surprised what kind of imagery you can get out of this lenses.

The Hasselblad x Motorola True Zoom Lens is a Moto Mod that as of right attached to the Moto Z, Z Force and Z Play. It has its own dedicated camera functions so you don’t have to rely on the actual smartphone besides its big display. There is a switch for doing 10x optical zoom, a shutter button, a xenon flash bulb and power button. You can also use the Moto Z wrist twist function to turn on the camera as well. Also unlike of the other mods it relies on the power from the phone and doesn’t need to be charged up prior.

It shoots at 12MP in the usual jpeg but also RAW format. Also it records at 1080p and has 2 mics on the front to pickup sound. It is a bit odd though to only shoot 1080p on here when the Moto phones that its attached to are capable of doing 4K recording.

Other than that it is a pretty well crafted mod, not too heavy and also comes with its own carrying case. The case not only fits the True Zoom Lens but also is made to fit whatever smartphone its attached to as well.

So I used the True Zoom Lens in a variety of settings over the past couple of weeks ranging from taking pictures walking around NYC to snapping photos and video of musical artists while at a music festival called Made in America. Photos come out great in well-lit areas and if the image is pretty stationary. Trying to snap one in action takes a bit more work and low light isn’t exactly the best. It has an Aperture f3.5-6.5 so photos may already come out a bit dark. Sometimes I try to raise the exposure thanks to the Moto camera settings to achieve some better photos.

Also I like taking pictures with cameras whether it regular ones or smartphones one-handed and its a bit hard at times with the True Zoom Lens. Only because my hand my rest on the screen or menu button and stop my snapping my tracks. The 10x optical zoom makes a world of different compared to digital zooming on a smartphone. Imagery comes in much better with minor distortion. Using it at the festival i mentioned earlier helped may for some crisp shots.

Best thing about the True Zoom lens is that works with every camera right out the box. Instagram, Snapchat, hell even Periscope. Zooming in and out isnt any issue and it plays like its the native camera already built in. It makes for some nice social media shots if that’s up your alley since all the photos are stored on whatever device you are shooting with.

With a hefty price tag of $300 is it really worth it? Its a hard price to swallow especially if you just spent $400 on the recent Moto Z Play. Like I said on a good bright day outside the photos can come out gorgeous looking but even at those times its hit or miss. Its really best attribute is giving you a feel of having an actual point and shoot. While you could just pony up and get one having one mixed in with a smartphone has its advantages. It can make your social media picture taking life better. You can upload right to your favorite apps without issue.