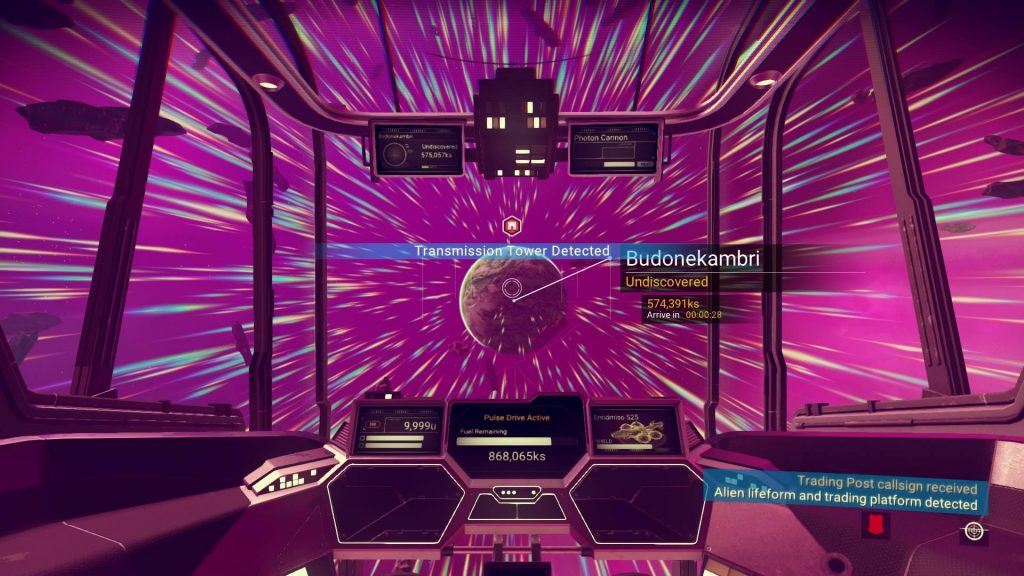 No Man’s Sky is a weird game. It really is. Weird is a good thing and a bad thing at the same time. I’ve played this game for hours on end for a little more than a week and I can honestly say that as much as I hate this game for being weird I’m shamefully addicted to this game and that’s weird. If you play this game you’ll understand EXACTLY what I mean.

No Man Sky’s is really more hype than anything else. When we first saw this game at E3 about 2 years ago it looked incredible and one couldn’t help but wonder what this game would be all about. Is it space travel? Is it time travel? There was so much mystery behind what this game was supposed to be. It didn’t quite live up to its hype or expectation but that doesn’t make it a bad game. Not at all. It’s addicting as hell actually. 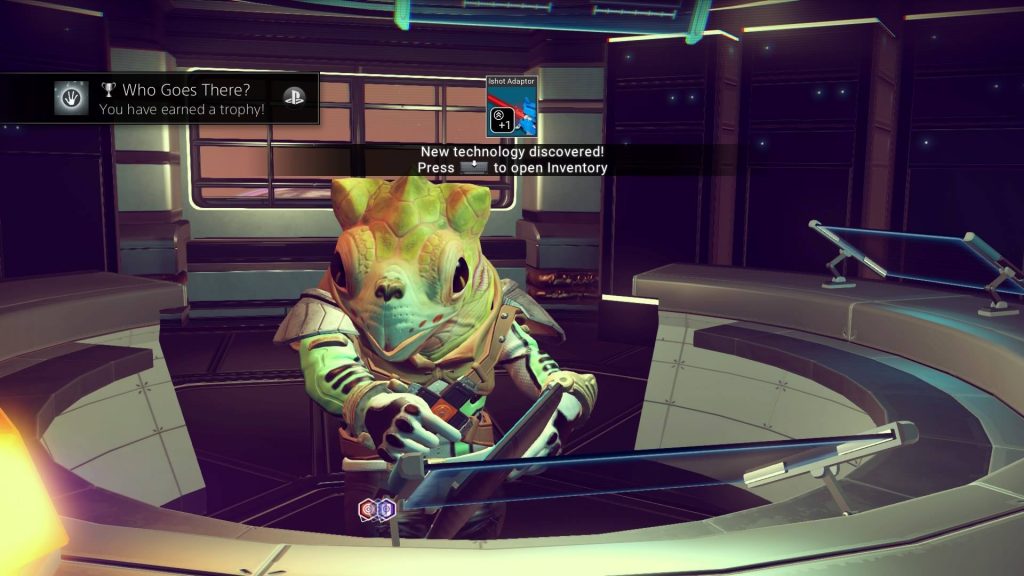 During the time that I’ve played this game I’ve gone through a series of emotions. Utter boredom, frustration and then a raging desire to explore the depths of space and discover every planet in the galaxies that I travel to. No Man’s Sky is a game about that journey and survival. That’s it. I thought going into this game that it would be more involved than that but no, that’s the basic premise of the game. You travel from one planet to the next and adapt because each planet has an atmosphere and an environment exclusive to that planet. YOU, just have to figure out how to survive on that planet by exploring, harvesting the planets’ resources, studying it’s living species of plants and creatures as well as interacting with any indigenous aliens to learn their language.

No Man Sky’s essentially gives you two main paths to follow. The path of the Atlas or make it to the center of the universe. You can also chart your own path and explore freely but I don’t know if there is an end game with that path. Either way, these are your options. So far I’ve been doing a mixture of the first two options. Searching planets when you first start the game is actually kind of fun. You get to a planet and the first thing you have to do is search for new resources. Resources in this game are essential to your survival. In fact, they’re the ONLY way you’re going to get anywhere in this game at all literally and figuratively. I’ll get back into that in a sec. As I mentioned before, each planet that you visit has conditions specific to that planet. You can be on a planet to where as it’s very hot due to its proximity to the sun or you could be on a planet that’s extremely cold, You could also wind up on a planet that’s extremely toxic due to high levels of radiation. Whatever situation you find yourself in, the collection of the right resources is how you thrive in this game. Terrain and environment are rugged. 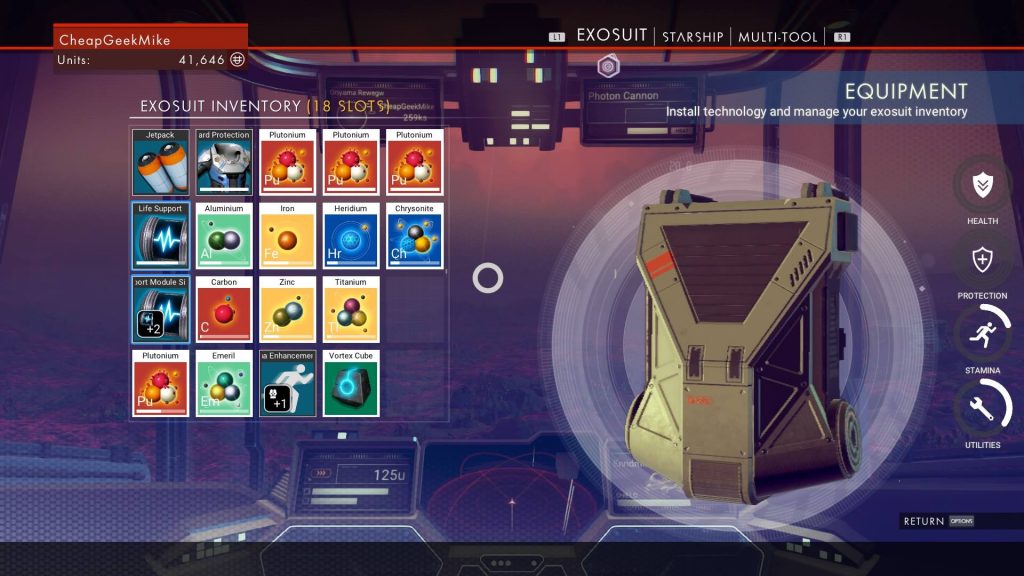 You have 3 menus that you have to successfully manage in order to maintain survival. Your exosuit which keeps you alive on whatever planets you visit has a jetpack and life support system that need to be charged up. Your starship, where you’ll need resources the most requires that you always be on the hunt for more and more. You have a lot account to for, launch thrusters, pulse drive, hyperdrive, photon cannons, etc. Lastly the Multi-Tool is your mining tool mostly but it can be used as a weapon as well. All of the three main items that you use throughout the game can be modified and traded and the modified again to better serve you as your game progresses.

As you play NMS you’ll find that at first all you’ll be doing is scavenging (Watch out for Sentinels). I’ve spent hours on end on one planet. The planets in this game are vast. You’ll travel from place to place and you’ll be searching and searching and searching. At first it isn’t very clear what you’re actually looking for. You’ll get frustrated as I did but for some reason that frustration will turn into intrigue and you gotta go back again and find some more stuff. Eventually it’ll get to the point where as the more you find the more you’re going to need someplace to put it and this is where the incessantly annoying slot system comes into play.

Each of your three main items uses a system of slots to manage how much you can and can’t carry. This makes for an interesting conundrum as you will always find more than you can carry. Always. This element of the game I absolutely hate. You never have enough slots on your exosuit or your starship. In order to get more you have to search the planet for pods where you can buy an additional slot with the units you have or you can buy slots on a space station with Atlas passes (you’ll learn about those later). Every time you buy a slot for your exosuit the price increases and it can get very costly very quickly. As far as your spaceship goes, you can just find and repair a damaged ship on a planet that has more slots than your current one OR just buy a ship from a trading post or space station from an alien granted you have the units. Again, expensive and costly. It’s a clusterfuck of a system because units aren’t so easy to come by and the more you play the more you’ll have to spend.

Scanning is major for NMS. Each planet has rock formations, plant life and living creatures that require scanning. Each time you scan something you learn more about the planet. There are also incentives to scanning. If you’re able to properly scan and log all species or a set of specific species of said planet you’re paid a large sum of units as a reward. The first planet I was successfully able to scan all species for paid made a nice 300,000 units for my trouble. Like I said units are not easy to come by so if you’re willing to spend a little time and do some scanning it’ll pay off for you.

I Collected, I Scanned…Now What? 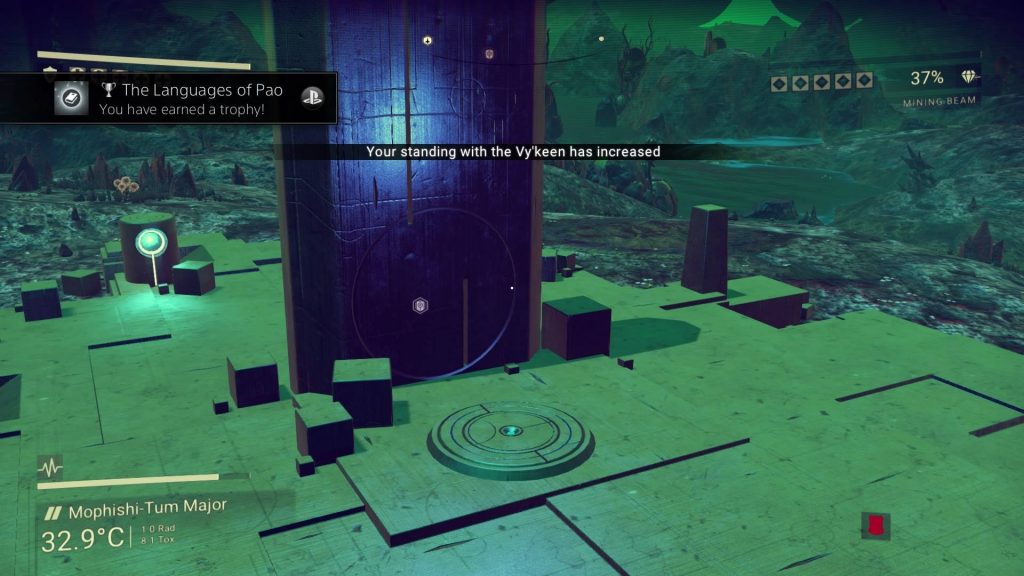 “Now What?” Is kind of a loaded question at this point. NMS doesn’t really offer much in terms of direction. It’s one of those games where you have to figure it out as you go along. The more I played I figured out that there at least 4 alien races that have a unique language, a certain culture and mythology and the fact is there could be more out there. The Gex, Korvax, Vy’Keen and Atlas seem to be the major ones at this point. As you travel from planet to planet you’ll find Monoliths and knowledge stones which aid you in learning a language of a specific race. The galaxy you’re in also helps to determine what language you learn. In my experience playing I’ve figured out that learning language is the key to it. When you land on a planet try to find Monoliths and learn language first. Continue to explore that planet and find downed ships and repair them to get a better one with more slots and better guns. Find shelters and colonial outposts. When you get to these places save your progress and go inside and gather everything you can grab. Sometimes an alien will be there with a weird riddle to solve or sometimes there will be a kiosk with a number puzzle, they’re easy to figure out so knock that out and get your reward.

Travel the galaxy. It’s a must. NMS is a massive game with endless places to go. Keep your hyperdrive full, get a better hyperdrive later and explore. By the way, watch out for those pain in the ass scans from hostile pirate ships trying to steal your shit. Keep your guns fast and powerful because if you get in a gun fight you’ll want to destroy them quickly.

There’s more to this game and what I described was basically what I’ve done up to this point. I bought NMS from the first day and I lost interest within hours because the game wasn’t compelling right away. Once I started to notice that everyone and their mama was talking about it then I gave it another shot. So after a 2-day hiatus I turned my PS4 back on, rocked out for 7 days and I still have mixed feelings about this game. I hate it because it didn’t nearly live up to the hype but I can’t help but be addicted to this game. It’s weird. If you haven’t gotten this game yet. Check it out on the PS Store or your local retailer.