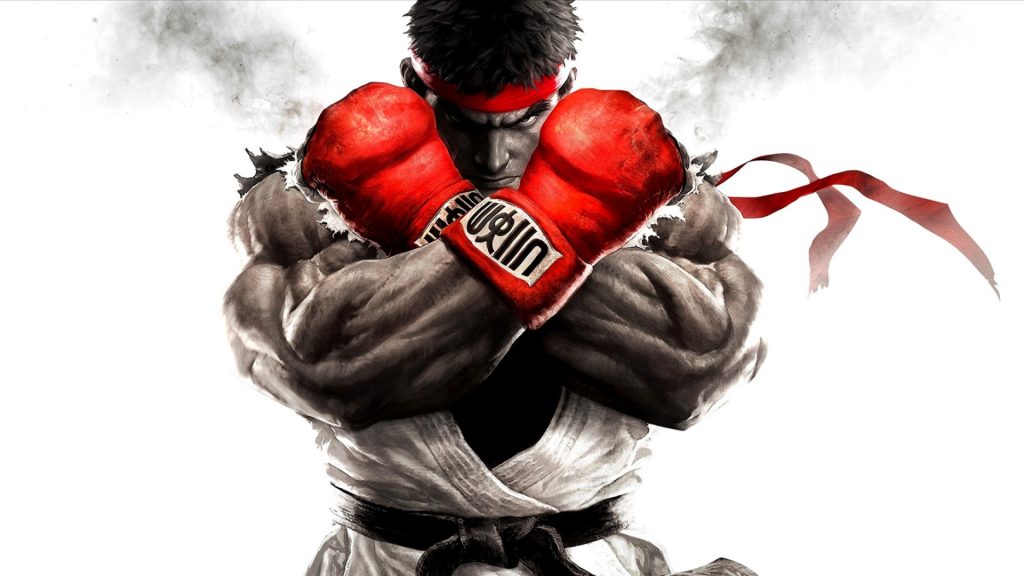 Street Fighter V is no different. Prior to the release of the game what we saw from screenshots and actual gameplay made this game appear to incredible. Here’s the truth. It is incredible. The game is visually beautiful, smooth, combo filled and relatively easy to play from the novice level to the super advanced. From that point of view the game is perfect but there’s a glaring problem with SFV. There’s nothing to do really at all in this game and it makes an otherwise fantastic game a big disappointment, for now. 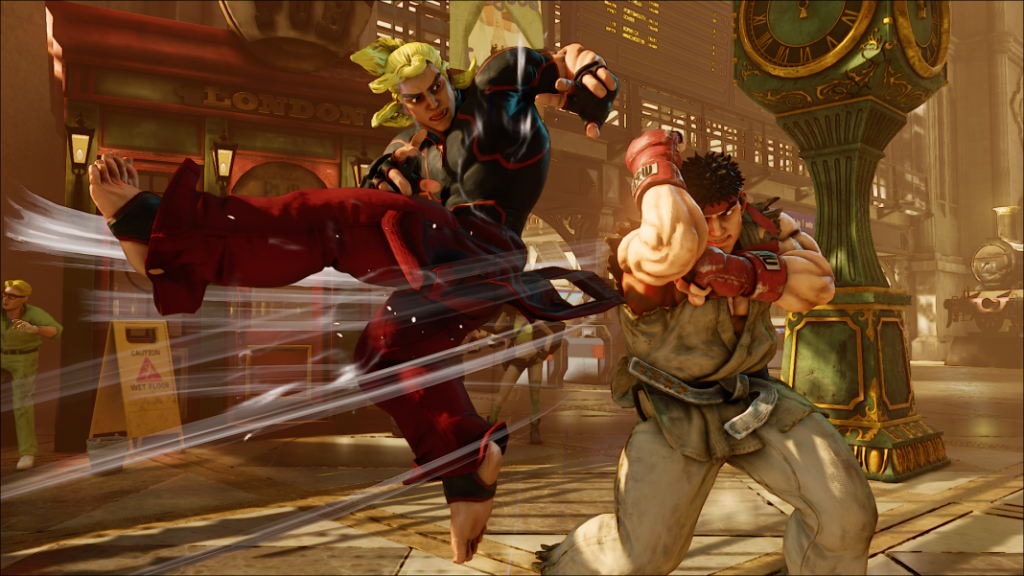 Let’s just start with the gameplay. It’s the best part of SFV. The game is so well designed, from the scenery to the characters you play with, their special moves and cutscenes when you perform a super are all top-notch. Just looking at this game visually you’ll feel as if your $60 bucks was well spent.

Executing moves in SFV is something that Capcom worked on heavily this time around when they created this game. No longer do you have to feel as if the only way you’re going to get the best out of this game is by having an overpriced tournament joystick or fightpad (although you’ll play much better with them). The new fighting engine of this game gives every player somewhat of an ability to make every match competitive and not just for the skilled players who have more time to devote to the game. This doesn’t mean that you shouldn’t bother to improve on your combos, juggles and supers because that makes a difference but it does mean that you’ll have more of a fighting chance in a match because there’s less of a penalty to not being exact in command execution. That also doesn’t mean that button mashing will create success in a match either so get that out of your head if you were thinking it. This game is for players. 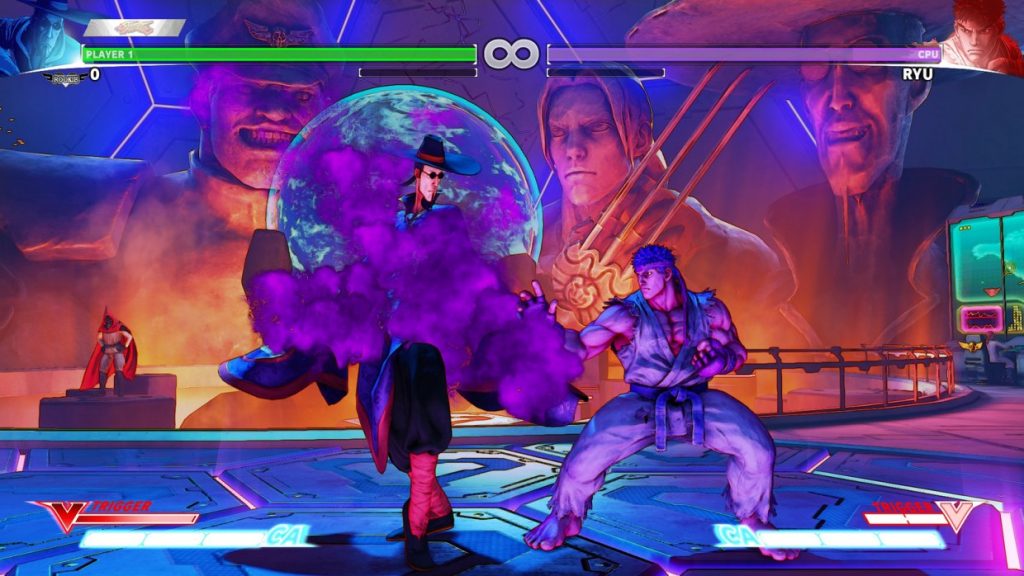 The V-skill and V-trigger options are two “new” options that can change combat depending on the character you’re using. It’s basically a system that allows you to perform different moves once your character has taken a certain level of damage (Which was pretty much already there). Basically, once your V-Gauge fills up you can use the V-Trigger by pressing HP + HK to go into V-Trigger mode. As I said prior, each character has a different mode, for instance I started off using F.A.N.G which is one of the new characters in SFV. His V-trigger mode essentially covers his body in a purple poison mist that if he attacks you with it and connects it will slowly drain your energy bar. Ken’s V-Trigger covers him in flames and attacks have much more damage applied to them as a result of the V-Trigger. You get the picture? That’s what V-Trigger is all about.

V-Skill is a little different in that it doesn’t rely on the V-gauge like V-trigger. This is just a fighting move or technique that a character possesses that helps to fill up the V-gauge along with the damage you take in combat. The two combined is what allows you to ultimately use the V-trigger once it’s filled. It’s nothing revolutionary and different. It’s just a remixed element of the “super” gauge from previous games.

Capcom pulled out all the stops to make sure that overall gameplay was improved but not so much to where it takes away from the core element of what SF is all about. This is a game where you can sit down with for hours and play because there is plenty to learn and when you master it, your opponents will know they have a fight on their hands. Great job here. 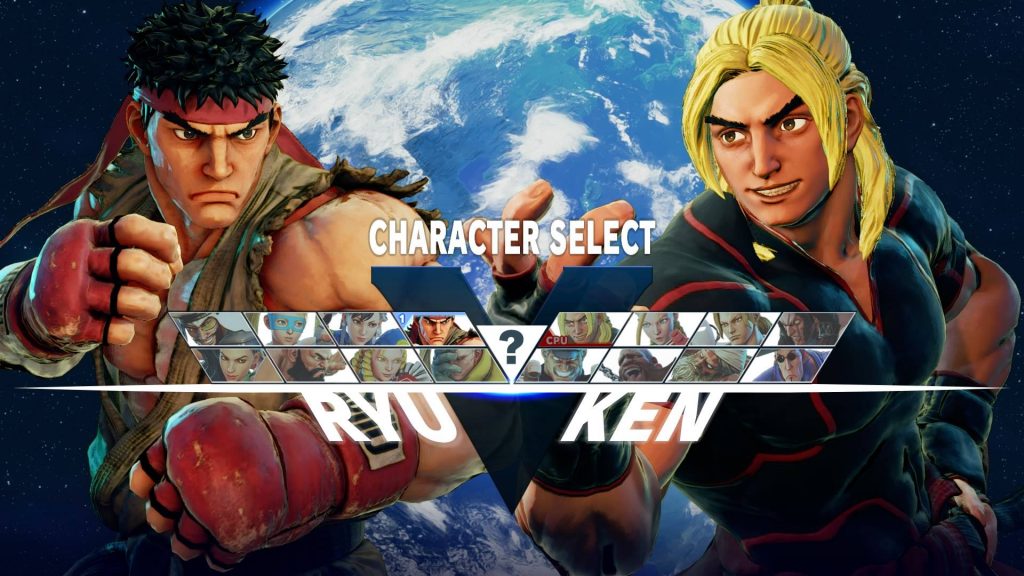 Character selection is where for me the problems begin with Street Fighter V. The fact of the matter is, there aren’t enough of the right ones. I’m not saying that having more characters makes for a better game, it doesn’t. Factually speaking, having too many characters can lead to confusion and too much to master but in this case Capcom only gave us sixteen and some very popular characters are just missing. Why, Capcom? Is this part of a future DLC? If it is then that makes no sense. At least not to me. Why are Akuma, Guile, Evil Ryu, Blanka, Sagat, Honda and some notable others ALL missing? Ok, if Evil Ryu and Akuma are out I can accept that but never the characters that started SF2 off and every other SF subsequent to that. I hate that. Mortal Kombat never leaves out Scorpion and Sub Zero. It isn’t the first time that main SF characters have been omitted from a SF game but for the first crack into the next-gen they would’ve made an exception. That is just my opinion and it’s a little nitpicky but I’m quite sure I won’t be alone in my sentiment. 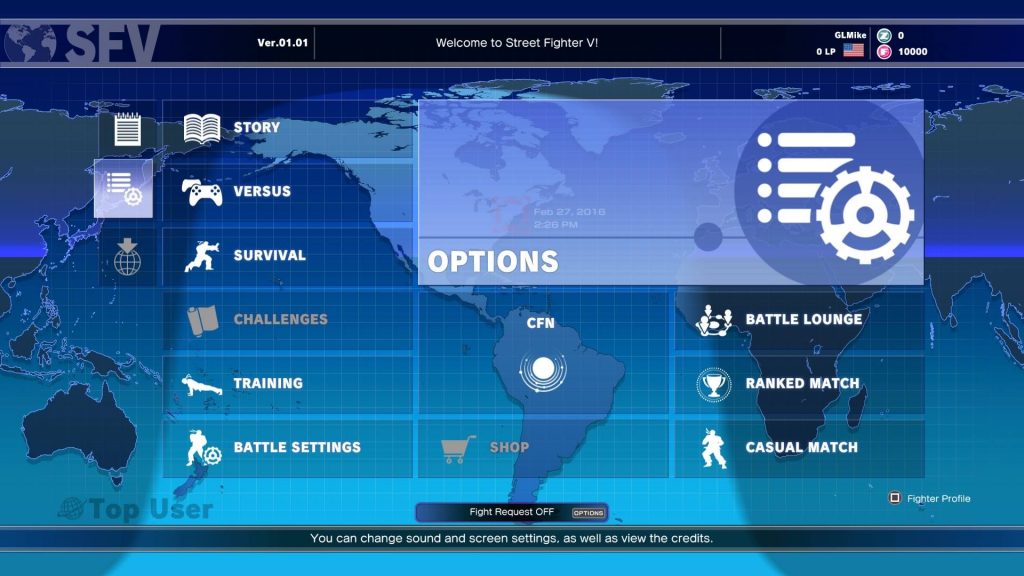 This is where SFV really starts to suck and make you regret spending $60 with the game modes (or lack thereof) and content (or lack thereof). The player hub appears to have plenty to do but when you get down to it, all that you can really do is training and versus modes. Story mode is incomplete and pointless. Challenge mode won’t be available until March, the Shop won’t be available until March as well. I haven’t completely figured out the Battle Lounge and what the point of it is (maybe I’m slow…idk, somebody please explain). 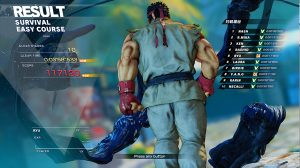 Survival mode gives you a bit of a challenge in that you play the game and try to win a match in a variety of different ways via a point system which will either hurt you or benefit you. For instance, after a match if you took heavy damage you’ll earn a certain number of battle points. You can buy a portion of your health or all of it back depending on how far into survival mode you are and what is being offered as a reward after winning a match. There are a multitude of ways to survive in this game mode. You can buy double strength to be at an advantage or go with half health and try to win the match to get double or triple battle points. There are lots of possibilities. It was kind of fun and it will definitely test your skills but how long are you willing to play that mode? The fact that it’s only one round kind of sucks too.

Versus mode is the best part of this game when in fact it works. Initially this game was plagued with server issues and playing your friends was almost impossible in this game unless you were willing to use share play. This has since been resolved for the most part and you can use versus mode but the initial issues were a big problem. I wish Capcom had better prepared themselves for the sheer number of players were going to be online and they should have anticipated this. Especially considering that SFV requires online capability just to get to the player hub. Go figure.

The game modes in SFV are one big giant clusterfuck. No other way to describe it. If you buy SFV prepare yourself for this.

SFV is a game that is a must own, but you should wait until March when according to Capcom all of the downloadable content will be available. The game is visually stunning and beautiful and when you do play this game it’s so much fun to pull off moves and string together combos and juggles. This game leaves SO MUCH to be desired. If you end up buying this game before the scheduled March updates then you’ll be paying for a 40% complete game and that’s not worth $60. Not by a long shot.

Gamers aren’t totally unreasonable. Gamers are sensitive to the fact that games nowadays are services as well as games. We also understand that we may buy a game that will get some content in the future but at the very least the core elements of the game should be there and we’re good with that. In SFV they are completely omitted (Arcade Mode anyone?). Why is that Capcom?. I can’t rightly recommend that anyone buy this game at this moment. It needs work. A lot of work, and gamers shouldn’t have to pay to wait for Capcom to get its shit together. I know this sounds like an indictment and in a certain respect it is but at the same time we see the potential in this game because what we have now is so well done. That’s why there is so much anger surrounding this game. Buy this game if you want, I’m not mad at you but YOU’LL be mad that’s for sure. SFV we will see you in March.

* Just in case you missed it. I played this game on for GStyleGaming on Twitch.tv which you catch HERE.