The simple home network is fast becoming just as necessary as the TV when it comes to the technology in the modern household. We use more and more gadgets and the internet is an absolute must. Just having the internet in the home gets you started but without a good router to give your devices solid and fast wireless capability within your home network, you might as well not have the internet at all.

I’m a gamer and user of a multitude of gadgets so my router functionality and capability is paramount to how I need my home network to function. The last router I used in my apartment was the AC1900 DLink DIR-880L which was a great router that gave me good speeds, had an easy to follow setup as well as network management via the online portal, mountable, dual band and sturdy (You can read the review HERE). Although, the DIR-880L was a great router, my inner geek always needs more. It’s never enough. Time to upgrade. So I did and got the AC3200 DIR-890L Tri-band router aka the 880L’s Big BAD ASS brother. It’s red, it’s got 6 antennas and a design like no other and it gives your home network lightning fast speeds with enough for everyone to use. 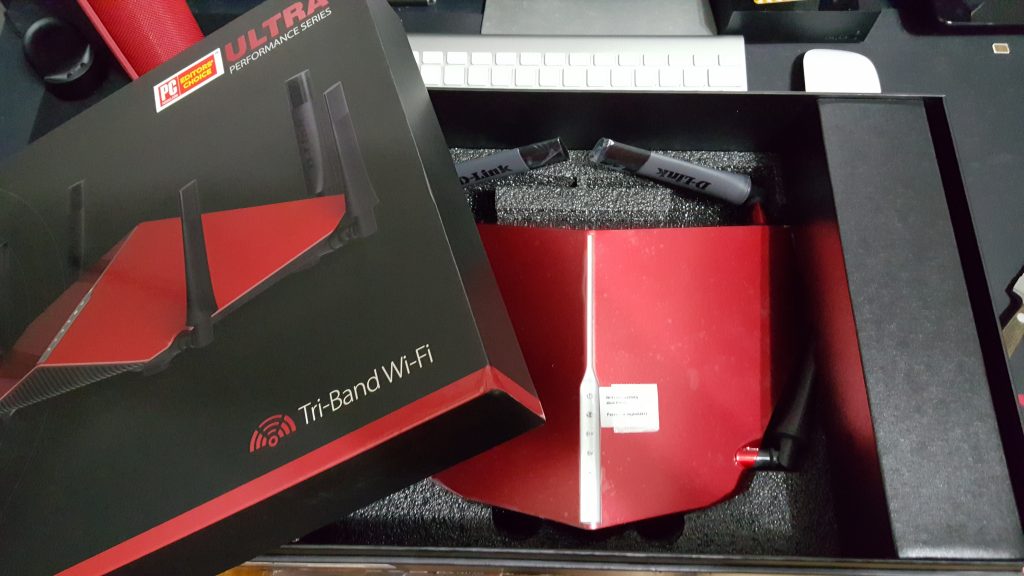 Unboxing the AC3200 was epic. The box was huge and I knew that I had a serious piece of hardware on my hands. Just looking at this router I could tell right away that my overall experience with my network was about to drastically change. The DIR-890L is painted in a bright red with a design that’s a bit weird and when you add the six antennas you have a router that looks imposing but ready to go to work. I took it out of the box, disconnected my other router, made all of the necessary connections and I was into the online setup wizard to begin setting up my network.

Just like the 880 before the 890, the online setup wizard was surprisingly very easy to use to setup your wireless network. In fact, the online setup is exactly the same as the 880 with the exception of the smart connect option which has the third 5Ghz band for a total of three bands. The 880 was dual band.

With that third band being the only real difference in the two router setups you still get all of your standard router settings such as QoS, port forwarding, Mac filtering, Website filtering, DMZ, SharePort, support for the myDLink USB media app, etc. It’s all there. It’s a one and done system especially for the novice user. 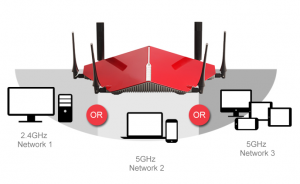 Smart Connect is the signature feature of the 890-L. It’s basically a system that allows the router to automatically allocate devices to a certain band either according to whether the device is a legacy device or just based on the number of devices connected to the access point. So, if you have a bunch devices like an iPhone 4, a Mac Pro, a Surface Pro 4, PS4 and a 6S Plus, the router will simply put the iPhone 4 on the 2.4Ghz as an older device and the other newer devices on one of the 5Ghz bands. If you just so happen to be streaming on the Macbook Pro watching Netflix then the 890L would put the Macbook on a 5Ghz band by itself using all three bands efficiently and in turn all of the devices are on the network getting the best possible bandwidth. It’s a pretty good system and for the most part it works really well. It is optional and you can toggle the function on and off. Geeks like me like to manually manage the network so you can do that as well. 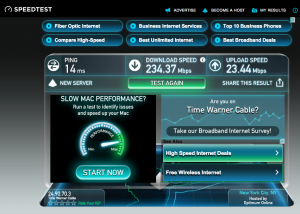 A lot of the reason that we buy routers in the first place aside from the convenience of having a wireless access point is the speed with which our devices can access the internet and download content. In the case of the 890L speed is definitely not a problem.

Now, of course there’s no router that is going to magically make your online speeds better. If you have crappy internet then no router or peripheral will improve that but for the sake of argument let’s just say that your internet is average or just above.

I have Time Warner Cable in my apartment and I pay for the internet service which is supposed to give me speeds relatively close to 200 Mbps. With the 890L I figured I would put it to the test. Why not? I ended up running my test about three of four times and to my surprise I got download speeds averaging btw 220-230 Mbps and uploads of about 20-22 Mbps. I was more than satisfied. Getting to webpages was quick, multiplayer gaming was so much better, watching 4K content on Netflix or YouTube. It was easy. I haven’t had a hiccup thus far and really no instances of buffering. This router did it’s job and then some. Impressive indeed and as strange as it may sound, I actually can’t wait to get online and web surf everyday. 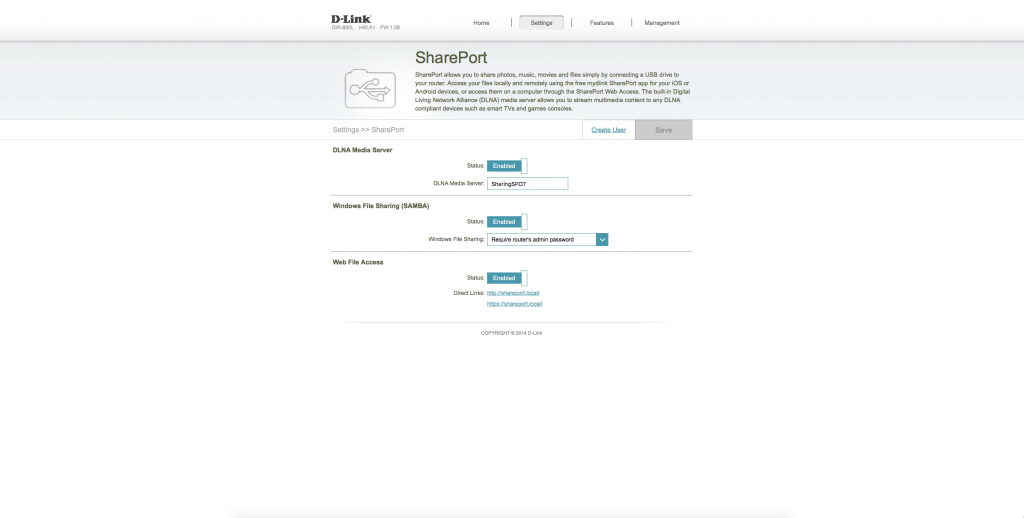 Routers with their new sophistication have the ability to stream content across your home network via USB. Although this is available to you as an option it is not a replacement or even really an alternative to having a home server or a NAS device connected to the network. So don’t confuse this feature. 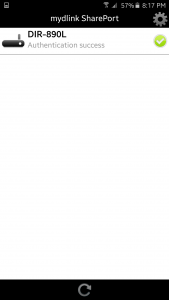 When I was using the 880L I also had access to the myDLink sharing app and Shareport features from within the routers online interface. Same applies to the 890L. You can configure USB storage drives on the SharePort page, there’s a section for DLNA Media Servers, Windows File Sharing (SAMBA), and Web File Access disk-sharing options. Realistically, I found these features to be more for slightly advanced users or specific types of users with particular setups in their home for streaming. If you’re a novice and you want to try to learn it then by all means give it a shot, but I would recommend the myDLink app.

When it comes to the myDLink app there’s some minor setup involved if you want to use it. First you’ll have to create a myDLink account within the app or online and then sync it with your phone or tablet, connect your storage device in the back (preferably USB 3.0) and you’re ready to get your share and stream on. How well did it work? It was pretty darn good, I must say. Sometimes the streaming was just a bit slow but that was to be expected and it was fine. I just wanted it to work. I did have the occasional hiccup when I was in another room, that’s because how I streamed was dependent on how close in proximity I was to the router. If I got a little bit far away then I got stuck and I had to reload the content again but overall it worked well across a few devices I did test. Even simultaneously. No problem. I didn’t have the same success with the 880L but the 890L is a completely different router altogether.

For me personally, the DLink 890L is the best router that I’ve ever used. Not only do I love the design but I love the high speeds I’m getting now. I also have a new appreciation for the USB sharing capabilities that I didn’t have before with the 880L (because it kinda sucked). Stepping up from my previous router to this was a drastic improvement.

Keep in mind. Me saying that this is the best router I’ve ever used means that I’m speaking for me and not in general. What I can say generally speaking is that this is one of the best routers that you will find out there. The scary part is, this router is not exactly “new”. It’s been around for a bit but I’m just now getting my hands on it. In the meantime DLink is already prepping for the release of the 890’s big brother the AC5300-895L which you can see here.

The AC3200-890L may not be for you. There are some comparable options out there. Linksys, Asus, TPLink and Netgear all have great versions of the AC3200 version router available. The 890L is the version that I liked the most. The interface was simple enough, sharing was pretty easy, my WiFi is at light speed and when my friends come over they can’t help but stare at it. It’s got everything you need to have for a home network or a SoHo. At $299.00 it is a bit pricey and somewhat overly priced but you can’t put a price on having great WiFi at home nowadays. That of course is up to you what you think that’s worth. You can get it HERE