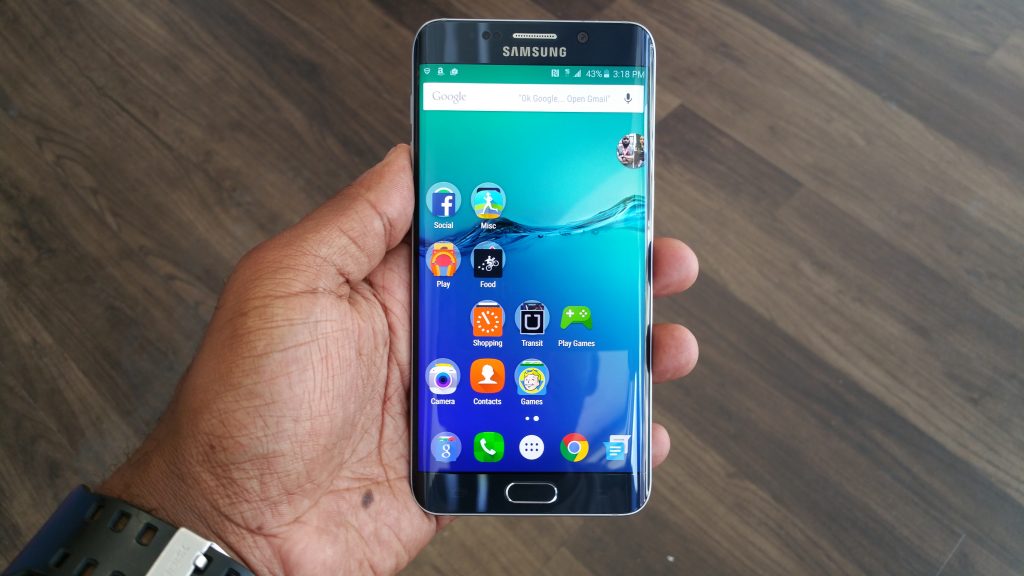 When I heard that Samsung would be creating a bigger version of the Galaxy S6 Edge I wasn’t sure what to think. I wasn’t a big fan of the Edge series starting from the Note Edge and that didn’t change with the s6 Edge so why would I be excited about this? Immediately I was skeptical. It’s not because they weren’t good phones but more so “What’s the point of the curved edges?”. It always stayed in my mind as the primary reason why I couldn’t bring myself to buy one.

Fast forward to NYC and the super gala to show off the Note 5 and the S6 Edge+. I’ve actually seen and held the S6 Edge+ and immediately my views on the S6 Edge+ changed, slightly. I still say to myself “What’s the point?” but now I’m also left thinking that the S6 Edge+ is so gorgeous that it doesn’t even matter and “I must have it”. Is it a worthwhile pickup over the Note 5 however? One thing for sure I can tell you. It’s easily the prettiest phone on the market, hands down.

The hardware on the S6 Edge+ is very high-end. Samsung always makes sure that their premium phones have the best there is. In the case of the S6 Edge+ it’s powerful and pretty. That’s the best way to describe it. 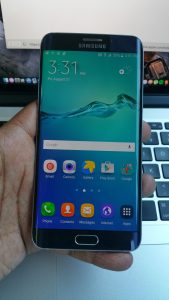 The S6 Edge+ is basically a bigger version of the S6 Edge. With that you get an all-powerful Octo-core Exynos 7420 processor, 4GB RAM, WiFi, NFC, LTE, Wireless & fast charging, Bluetooth, a much improved fingerprint sensor, a Quad HD super AMOLED 5.7″ screen, a 32 or 64GB storage option and all while running Android 5.1.1 Lollipop with TouchWiz. It’s similar to its baby brother the S6 Edge in that they share almost identical insides. It makes sense. The S6 Edge was an extremely fast phone for all needs and the same would apply to S6 Edge+ which is why Samsung didn’t really change much here.

The physical footprint is really the only thing that separates this phone from the S6 Edge. Running apps, games and multitasking was a breeze on this phone. For the sake of this review I put this phone through some less than practical situations. Since the average person who will ultimately buy this phone isn’t likely to put this phone through the rigors that I did then it’s safe to say there’s more than enough power to tackle any task you need to handle. 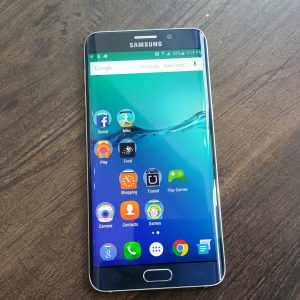 The screen of the Galaxy phones have always been aside from the camera it’s best asset. Much of what makes the S6 Edge+ so pretty is in its screen. I might be going on a limb by saying this but the recent Galaxy series phones (S6, S6 Edge, S6 Edge+ Note 5) have the best screens of all smartphones on the market. Period.

When you look at the S6 Edge+ and look at the screen, you KNOW that you have a premium phone. Like I mentioned before, this phone is rocking a Quad HD super AMOLED with that 5.7″ curved edge screen. The screen is so vibrant and so bright that only in direct sunlight is there ever a need to turn the brightness all the way up or close to its highest settings. Even in bright sunlight I didn’t have too much difficulty seeing what was on my screen. The screen is flawless. The LG G4 and the iPhone 6 have comparable screens but this is the best.

Having a phone with 518ppi gives everything you look at a view like no other. If you’re watching video on YouTube you can easily go for the higher res playback formats, you can watch those 1080p movies on your phone without hiccups, and the video playback you get when you shoot 4k video or even just HD on your phone is amazing. Playing games on this phone is probably the best part for me. Playing Asphalt or RipTide on the S6 Edge+ was just great as a result of that screen. Make no mistake it’s just as good on the S6 and the S6 Edge but with larger displays sometimes bigger is better. The only negative I have is that the screen is curved on the edges, other than that. Best screen there is.

Now, we get to why you buy a Samsung Galaxy phone in the first place. The camera. The best part of this phone. I personally love the camera. The S6 Edge+ has a 16MP rear camera with OIS (Optical Image Stabilization) and a 5MP front facing camera. It’s the same camera it’s smaller counterparts have but because the camera is so good Samsung didn’t need to change a thing.

The pictures are good as one can imagine a camera can get on a smartphone. They’re crisp and detailed although at times overly sharpened but you always feel like you got a great shot no matter the photo you take. 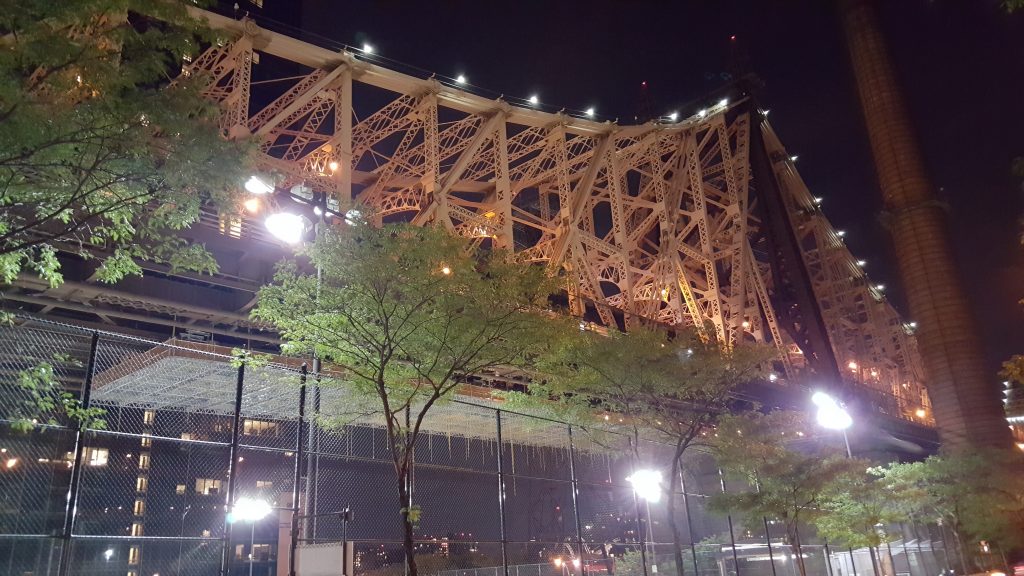 You have your usual auto setting and then the Pro settings to change your aperture, ISO, lighting, etc. You have complete control of how you want your shots to look. Daylight photos were great most of time except in bright sunlight where glares became overwhelming and sometimes took over my shot. Low light photos were pretty solid also, If the lighting wasn’t too low I was able to make out whatever I shot with relative ease. Only the iPhone 6 Plus and the LG G4 can really match this camera, feature for feature and shot for shot. 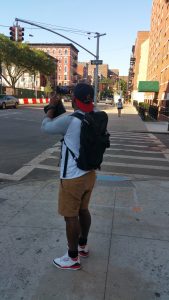 Lastly, the S6 Edge+ camera app has many of the same features as the Galaxy S6 but this time around Samsung added a few new camera functions that separate the two phones just a bit. The best feature and the one I can see everyone having the most fun with is the new “Live Broadcast” feature. It’s essentially like a built-in Periscope app. You select “Live Broadcast” and you’re recording video and uploading to YouTube in real-time. That’s it. I had some issues with it at times and it didn’t work but for the most part it was pretty good. People who buy this phone and the Note 5 are going to be using it a lot.

The S6 Edge+ camera is where the fun is on this phone. No doubt.

Final Thoughts and Everything Else

The S6 Edge+ is a gorgeous smartphone. One of the best on the market right now in terms of weight, feel, design and function. There are a great deal of positives. The fingerprint reader is much improved this time around and I can actually see more and more people using it to secure their phones. The “Live Broadcast” feature is going to give you more fun with your camera. That screen though? Wow!

As you know, if there are positives then there are negatives. Of course. For starters, the S6 Edge+ off contract is unfairly expensive at $750+ for the 32GB model and $900+ for the 64GB model. That’s not affordable for someone who doesn’t want to deal with the constraints of a contract. With those prices what’s to make someone want to buy this phone as opposed to a OnePlus 2 which is hundreds of dollars less and comparable?

The battery on the S6 Edge+ is a puny 3,000 mAH which means for a phone this powerful that has a screen this bright you get a battery which forces you to keep your charger with you all the time. You won’t get an all day experience with this phone and that’s a big problem. It’s power-hungry because it’s powerful yet the iPhone 6+ manages this beautifully why can’t Samsung? This is the major trade-off for having a phone this thin and light. You lose precious battery as a result and I’m not sure it’s always worth it. It certainly isn’t in this case. 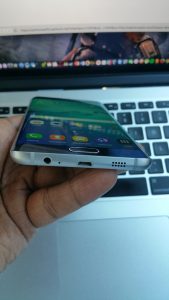 The biggest problem as I see it are the curved edges. I still think that they serve no purpose as a utility. It’s a nice gimmick but as long as I’ve been using the S6 Edge+ I’ve yet to find a reason why it’s necessary to have curved edges. The “People” contact function on the edge is cool but there’s nothing to make me use it more so then just using the contacts app on my phone not to mention it’s a pain in the ass to pull up sometimes just to use it. The rainbow color contact system when you place the phone upside down and notification ticker on the edges are just not enough to make the price tag on this phone make sense.

Even with the negatives, the S6 Edge+ is still a very solid phone. You wouldn’t be losing if you decide to have one. It’s a head turner. I’m not quite sure I would recommend this phone over the Galaxy Note 5 but I’m not mad that I have this phone to use. Samsung did a great job making the prettiest phone on the market today.