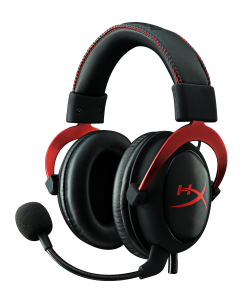 I’m a gamer, not quite hardcore but just a notch above casual. Here’s the problem, gaming is expensive or at least it can be. If you’re a notch above a casual gamer like me then a set of gaming headphones is essential….absolutely essential. Even if you don’t use them it’s good to have them ready just in case, but how much should you spend?

Kingston felt that having a good set of gaming headphones didn’t necessarily have to cost a great deal of money so they came up with the Hyper X Cloud series headphones. The first set was really nice, you could get them in a couple of different colors and they were comfortable. They had good sound and was inexpensive. This formula is what made the Hyper X’s hugely popular. Sure, there may have been better headphones (depending on who you ask) but not at that price. Well, Kingston has returned with the Hyper X Cloud II headphones and guess what? They’re still cheap, still well designed and even better than before. 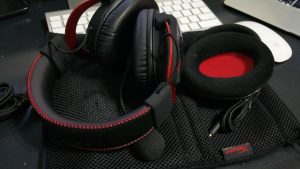 The new Cloud II’s have pretty much the same design as it’s predecessor. There isn’t much of a change to speak on at all except for a subtle change in the weight. These seem a little lighter. With the Cloud II’s seemingly lighter one would think it would compromise durability, but nope. The Cloud II’s are sturdy and comfortable. Realistically, sturdy and comfortable can be a tough balance to strike, either you get one or the other but rarely both. Not with the Cloud II’s. The design and lighter weight makes it so they don’t actually “sit” on your head because they’re heavy. You just put them on, get your game on and you really don’t notice them which is a good thing for long hours of gameplay.

The ear cups are pretty comfortable. The Cloud II comes with two sets. There are the faux leather earcups and the velour material earcups. Both of them were comfortable although I chose to wear the velour because they were a little bit softer. 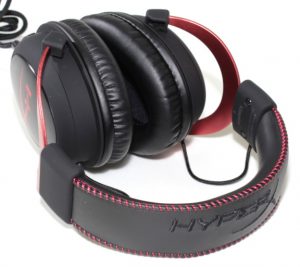 The only problem with the earcups that I had been changing them. It was a pain in the ass to change the earcups because of the slide and tuck process it requires to get them to stay firmly. You have to slide and maneuver these leather strips on the back side of the replacement ear cup so that it would tuck under a slot and sit firmly in place. I wasn’t always successful and it took me a minute and I instantly wondered why they didn’t opt for a snap button mechanism or just not allow you to change them at all. It’s not a big problem but I could see why someone wouldn’t want to bother to change them unless they absolutely had to.

On the left ear cup on you have the microphone jack placed discreetly on the bottom end. The microphone that comes with the Cloud II’s are removable so while you are home just attach it and you can get your game on and talk to your friends. When you’re ready to step out you just pull it off and store it the travel bag or on your desk and you’re ready to go. As a side note, you can take the mic with you if you want to just in case you’re listening to music on your phone and you need to answer a phone call BUT, you will look like kind of a dweeb talking on your phone with huge headphones and a mic attached to it. I should know, I did this…and felt like a dweeb.

The headphone cable is probably my favorite feature about the Cloud II’s just like it was on the original Cloud’s. The reason why it’s my favorite is that it has a really strong and durable woven fiber cable that won’t bend, break, snag or be cut just by accident. It would take quite an effort and a purposeful action to damage this cable and this means your Cloud II’s have staying power. I love this because I’m horrible with headphones sometimes. Absolutely horrible, but the cable on these is strong enough for me and my occasional but unintentional clumsiness. It’s ready for the accidental snag or tough tug.

Aesthetically the Cloud II’s are pretty overall. The leather accents are in the right place. No overbearing logos and thankfully no loud colors. With no design flaws and no changes it looks like Kingston decided that if it ain’t broke don’t fix it and I agree. It just looks good. Period.

The sound is the biggest change in the Cloud II’s this time around. The sound wasn’t bad on the first set at all but Kingston has given us more incentive to pick up a set of Cloud II’s. They have included a 7.1 channel USB virtual surround audio card built right onto the headphone cable. Does this sound card make a difference? Yes. It does depend on what you’re listening to though. 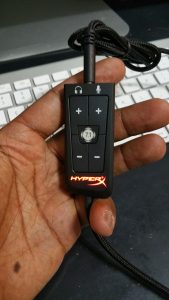 Gaming sounds with the Cloud II’s are very crisp and clear. You have your high trebles and high bass which is pretty common in gaming headphones so that way you hear your voices and background noise with clarity while getting your booms and gunshots with authority. With the 7.1 active I kind of got more of an up close sound more so than a virtual surround sound as it’s described by Kingston. I didn’t necessarily get the sense that sound effects of the game were all around me as I would assume is the intent of the virtual surround sound. I actually prefer it this way. It works for me. I believe that the way that these headphones sit over your ears eliminate outside noise so you really get to hear all of the goings on with the game that you’re playing. So the virtual surround sound wasn’t necessary for me. You do hear differences with the 7.1 so it does matter, just not as much as you may think.

The sound quality on the Cloud II’s is really good. I have no major complaints especially for the money you’re spending or not spending in this case. You get a lot more than what you expect for what you’re paying.

The Cloud II’s are my daily gaming headphones. So speaking from my personal experience they’re comfortable, they sound good, the mic is crystal clear and non intrusive and the best part? They’re a $100 bucks. What more could you want? Bottom line, a $100 price point is hard to beat when you consider what it costs to be a gamer as a whole. Game prices peak at $65 – $70 so to pay $30 more for a set of quality headphones that will probably last you longer than the games you play. It’s a sound investment and picking up a pair is a no brainer. I recommend these headphones to any gamer regardless of their budget. With that being said, go out and get yourself a pair of the best gaming headphones for $100.