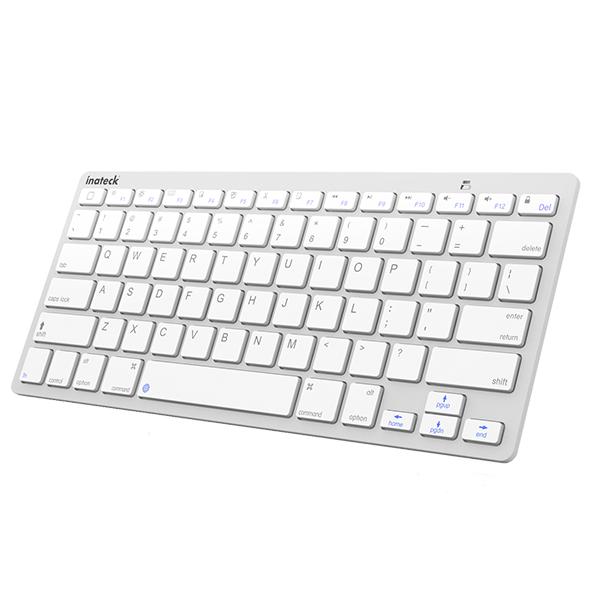 One of the main benefits of owning a tablet over a laptop is that they can usually do most of the things someone would use a laptop for when on the go. Not only that, tablets seem to last much longer on the go between charges and are way more portable and lightweight. The only negative is that most tablets do not have physical keyboards and typing with the virtual onscreen keyboard can be a pain and not quite as quick and accurate as with a real keyboard.

However, that can be easily remedied these days with the addition of a Bluetooth keyboard. In fact, there are tons and tons of Bluetooth keyboards available for the iPhone and iPad that you should have no trouble finding one that suits your needs, whether it be a keyboard case for that “Macbook” look or just a standalone keyboard that you keep handy on your desk or backpack. One example is the Inateck BK1002E Wireless Bluetooth Keyboard for Apple devices. It doesn’t have a fancy name, but this is one solid keyboard that not only functions well, but looks quite sleek and attractive.

The Inateck BK1002E is a rather nice looking portable keyboard. It’s based largely on Apple’s own official wireless keyboard, but for a small fraction of the price. This is because unlike the Apple keyboard, the Inateck BK1002E is made entirely of plastic. The face however is painted in silver and gives it an identical look to brushed aluminum. The keys themselves are in matte white. That means the Inateck BK1002E  looks almost identical at quick glance to that of the official Apple Wireless Keyboard, though you’ll notice the difference once you get close up. 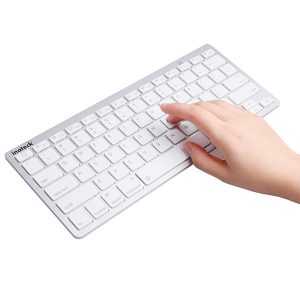 The rear of the keyboard isn’t as nicely done up as the front is and is just in a matte white. It’s also not quite as sleek as it is up front either. The Inateck BK1002E runs off of two AAA batteries meaning it’s not rechargeable so you’ll need to replace batteries over time. On the plus side, the keyboard is supposed to last around 60 days and if the keyboard does run out of charge, you can pop in some fresh batteries and continue working without having to wait for a recharge.

All the keys you’ll need are present and for the most part, is pretty close to being a full-sized keyboard. It’s much more comfortable to use than the keyboard on your iPad or iPad Mini.

The Inateck BK1002E works as you’d expect it to. It pairs easily with your iPhone or iPad and like other keyboards made for those devices, it even has a few dedicated keys for them, specifically a home button key and most of the top fn keys for specific actions. 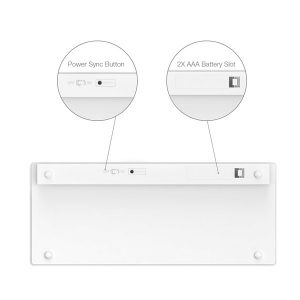 This is quite an easy keyboard to carry around as its thin, light, and doesn’t take up too much space in your bag or on your desk. What you will need though is either a separate stand for your iPad/iPhone or at least a case that can function as one, otherwise you have to prop your device up against something or just lay it flat to use.

I’ve only tried the Inateck BK1002E with iOS devices, but it will also supposedly work with your Mac as well. This would be a good alternative to anyone who doesn’t want to buy the slightly expensive official Apple Wireless Keyboard but still wants something that looks like it and functions like it.

If you’re looking for a keyboard to use for your iPad or even your iPhone, give the Inateck BK1002E a look. It’s an inexpensive Bluetooth keyboard that functions quite well and looks rather attractive thanks in part to its faux aluminum finish and striking resemblance to the official Apple Wireless Keyboard.

Some may find that the lack of a rechargeable battery a negative, but I actually welcome it. The use of batteries means you don’t need to carry around a charging cable and when the power does run out, just pop in a new set. It only takes just two AAA’s and each fresh set of batteries is estimated to last around 60 days of use.

Overall, I recommend the Inateck BK1002E Wireless Bluetooth Keyboard if you’re using iOS devices and even a Mac. If you want to pick up one for yourself, you can buy directly from Inateck, here.