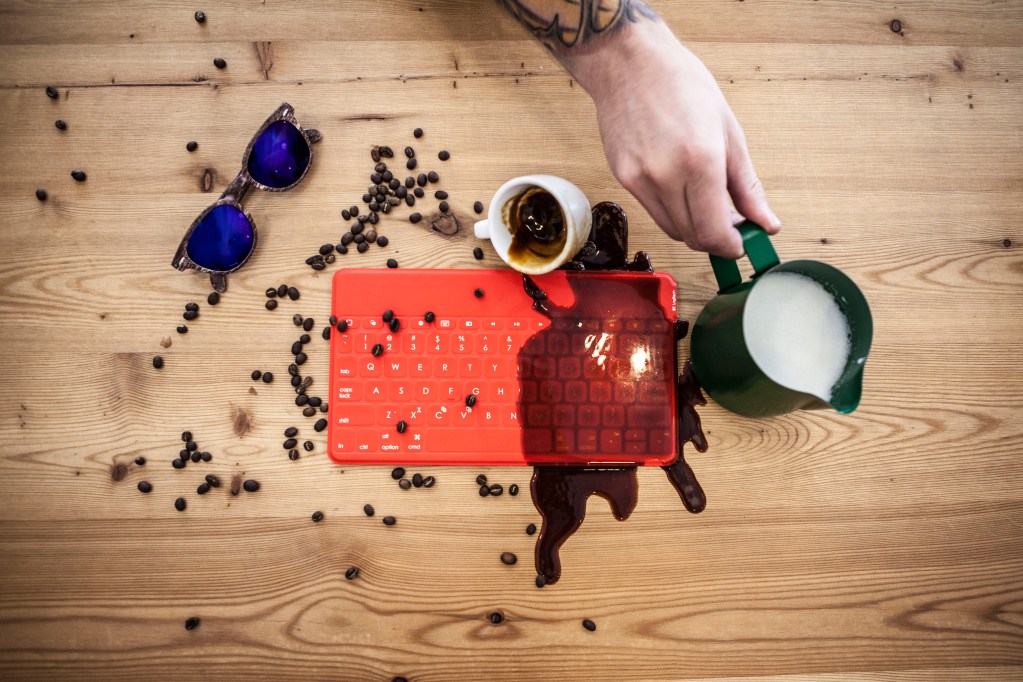 Logitech has announced Keys-To-Go which will be one of their most portable iPad/iPhone bluetooth keyboards on the market today. Its pretty thin, light and even spill proof thanks to its water-repellant FabricSkin. Slide it in a backpack, purse, book, and Keys-To-Go is ready to go. To learn more about Keys-To-Go check the video link and press releases below.

Also today Logitech will have two of their popular keyboards the Ultrathin and Type+ updated for the newest iPad Air 2 from Apple. You can click the links or learn more about it below.

[showhide]
Introducing Logitech Keys-To-Go: The Most Portable Keyboard Designed for iPad to Make Typing on Your Tablet Easier Whenever and Wherever

NEWARK, Calif. — Oct. 28, 2014 — Today L­­­­ogitech (SIX: LOGN) (NASDAQ: LOGI) unveiled the new Logitech® Keys-To-Go, a slender stand-alone Bluetooth® keyboard for any iPad that can fit anywhere and go everywhere, so you’re never at a loss for words. Logitech has also updated its current lineup of protective iPad cases with integrated keyboards – including the Logitech® Type+ and the Logitech® Ultrathin – to be compatible with the new iPad® Air 2.

“People use their iPads everywhere and the Logitech Keys-To-Go was specifically designed to effortlessly support people’s active lifestyles,” said Michele Hermann, vice president of mobility at Logitech. “We have introduced the Logitech Keys-To-Go and updated our existing award-winning lineup of iPad keyboards for the new iPad Air 2 to offer a suite of products that perfectly complement the mobility of the iPad. So, whether you’re a mother or father taking your iPad from the kids to type a quick note, or a traveling executive catching up on email, you can have easy access to typing when you need to say more.”

The entire lineup is designed to provide comfortable typing for your iPad. Each of the products’ Bluetooth keyboards have well-spaced keys to provide an exceptional typing experience. Each also features a dedicated row of iOS shortcuts that put navigation of your iPad at your fingertips without needing to reach out and touch your iPad’s screen.

Highlights of the lineup include:

The Logitech Keys-To-Go for iPad

The new Logitech Keys-To-Go is a standalone ultra-portable keyboard that is thin, light and durable to make it the perfect partner for on-the-go typing. At just 6.1 mm and 180 grams, it’s simple to tuck into your purse, briefcase or coat pocket without taking up precious space or weighing you down. To ensure a comfortable typing experience, its keys give you the tactile feedback you’re used to on your laptop, but are fused into a water-repellant FabricSkin covering that helps protect the keyboard from spills and dirt – so no crumbs get stuck in your keys and liquids wipe right off. The rechargeable battery can last up to three months on a complete charge. The keyboard is compatible with all generations of the iPad and iPad mini and is available in three colors – black, red and teal – for a suggested retail price of $69.99.

The Logitech Type+ for iPad Air 2

The Logitech Type+ is an all-in-one keyboard case for the iPad Air 2. It leverages the popular thin and light, two-sided protective case from its predecessor, and has a recently-optimized Bluetooth keyboard that is designed to replicate the typing experience of your laptop, so you can smoothly transition from one device to another without losing speed or accuracy. When in the typing position, the iPad screen magnetically attaches directly above the keyboard, keeping the screen right at your fingertips for easy navigation. The Logitech Type+ keyboard also has an automatic On/Off feature; when the iPad is positioned upright in the typing position, the Logitech Type+ keyboard automatically turns on, and when you lay it flat for browsing, it automatically turns the keyboard off. In addition, the auto-wake and auto-sleep feature turns your iPad off when you close the case and wakes it when you open the case, so your iPad is ready anytime you need it. The Logitech Type+ is available inBlack, Dark Blue, Bright Red,  Bright Green, Electric Blue or Violet for a suggested retail price of $99.99.

The Logitech Ultrathin for iPad Air 2

The Logitech Ultrathin is a thin and light magnetic clip-on keyboard cover for your iPad Air 2. The cover protects the screen of your tablet when you’re on the go and is constructed from high-grade aluminum material that perfectly matches the iPad Air 2; it is the other half of your iPad Air 2. Plus, the keyboard has a battery life that can go up to two years, and the batteries can easily be replaced when needed. The adjustable magnetic slot lets you tilt your iPad similar to a laptop screen for the perfect typing angle. The Logitech Ultrathin for iPad Air 2 is available in Black and White for a suggested retail price of $99.99.

The Logitech Keys-To-Go, the Logitech Type+ and the Logitech Ultrathin are expected to be available in the U.S., Europe and select countries in Asia beginning in November 2014. For more information, please visitwww.logitech.com or our blog.
[/showhide]