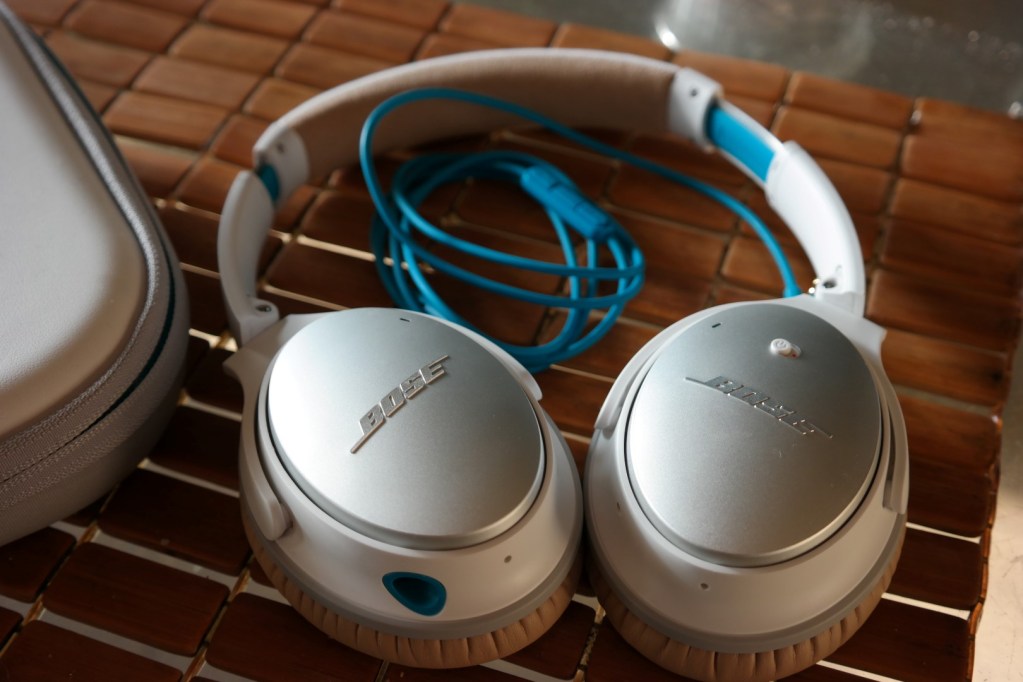 Bose has been around for ages and that’s been more evident once they had their 50th anniversary a couple of weeks back showcasing how they been incorporated in anything from stereo systems to headphones. One thing Bose has been trying to do with their headphones is give them some flair or style. Sure I would say they are catered to those that don’t want much flash but there are some that turn away just based on it not having enough. Bose has come out with the QuietComfort 25 to give it a more sleeker modern look as well as provide more of a comfort setting for your head. Has Bose taken the QuietComfort line to the next step? 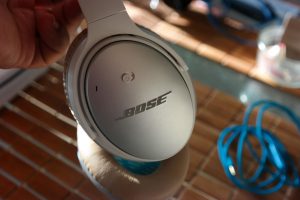 I opted for the white model as you always see people rocking Bose headphones in black or silver so was interested in trying a different colorway. These are mainly white around the cups and headband while it has tan colors for the ear cup cushions and under the headband. Accents of aqua blue are in different areas such as inside the ear cups and on the audio cable. The left ear cup has a slot for inserting the included AAA battery and on the cup itself is the on/off switch for noise cancellation. The Bose QC25s are pretty light and I like the fact you can either lay them flat or fold them up. Laying them flat and bending them a bit allows them to fit in the snazzy case they came with. Also inside the case is an Airline adapter for those nice flights. 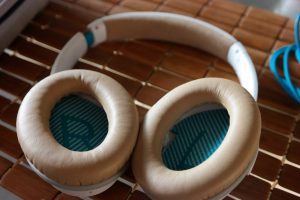 While you may not care about the style of the Bose QC25, I know the main reason you pick a pair of Bose is for the sound. They definitely don’t disappoint in that regard. I will say off the bat I usually keep them in the noise cancelling option as there isn’t really a reason to use them in the off setting and they don’t sound near as good. While in the off position the music had a distant feel to it. Once you do flick that switch though, they are good at locking you into and capturing your attention fully. They are good for grabbing the bass in Lil Wayne’s “Rich As Fuck” and can hear Weezy’s voice without it being drowned out with the strength of the low-frequency. Same can be said for Steve Aoki’s “Rage the Night Away” and the sound is nice and crisp and made me feel like I’m at a EDM show with all the thumping and pulsating from the music track.

I did some issues with listening to tracks that may not be of high quality. If you are going to listen to music with these make sure the quality is up to par or may dampen the listening experience. I use Google Play Music mostly for streaming and I have the settings at the highest quality. Sometimes there maybe a track or two not on there and I will head to the net to grab it and of course its not the best.

Being in New York, I always give these headphones the overall test of wandering through the big city. Whether I’m on the buses or trains the QuietComfort 25 did a good job of blocking outside noise. You would have to turn them up a notch to block much louder sounds but also make sure you don’t destroy your ears in the process. I think the recent Plantronics BackBeat PRO did a slightly better job without having to be cranked up. 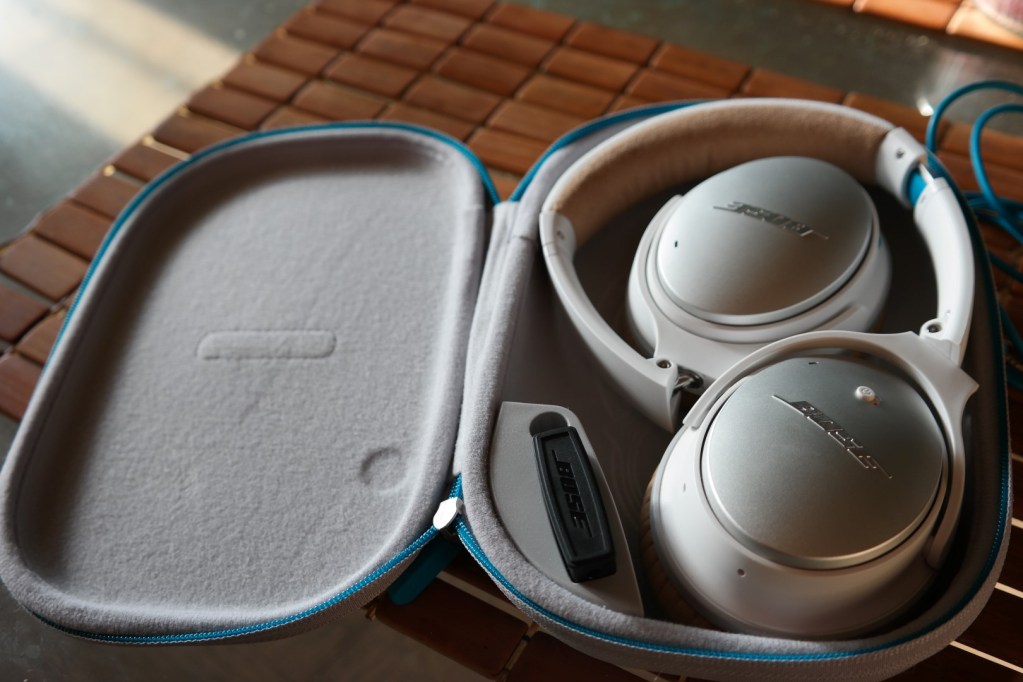 They are a comfortable pair of Over the Ear headphones as they cover my whole ear and the music isn’t directly blasting in your ears but around it based on the inner designs of the ear cups. I have listened to them for extensive periods and haven’t felt much discomfort and battery life has and is still doing good. 1 single AAA battery is advertised to give you about 35 hours of playback time. Good thing is if the battery dies you can still listen to music unlike others such as the Beats Studio Wireless.

The Bose QuietComfort 25 design wise remind me of the Bose SoundTrue Headphones they came out with some months back as far as design and keeping the sound quality of the QuietComfort 15s. They are comfortable and light even when wearing for long peroids and the sound is great as you expect from Bose. Only thing as mentioned before if music quality is all that great it won’t sound as good. If your the type that listens to nothing but high quality music anyway then you shouldn’t have any problem.

The Bose QuietComfort 25 are available now for $299.99(with ColorWare options for $399) and can be purchased at www.bose.com