Microsoft is preparing the world for the release of its latest version of the new Windows OS. Initially it was thought that what we were going to see in terms of their new OS would be Windows 9, however Microsoft ultimately decided that Windows 10 was going to be the name of their new flagship OS and thus we have it. 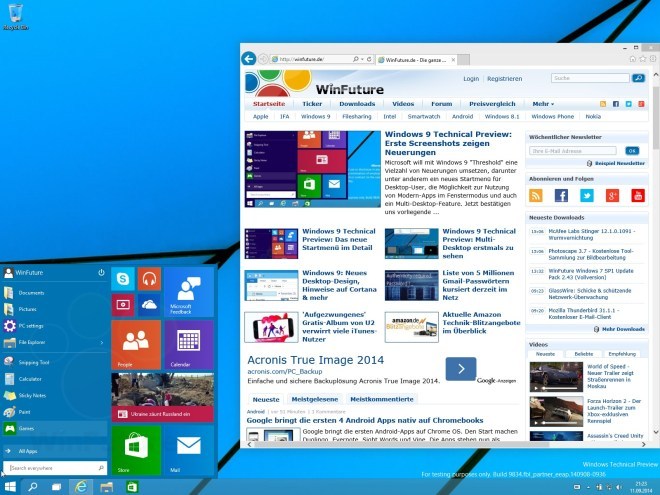 The new OS comes stacked with some great new features and a more Windows 7 like user experience but it maintains the overall look of Windows 8 as you’re used to it now. I’ve played with the new Windows 10 since the tech preview has been released and so far so good. There are some things that are new to Windows that you’ll see such as multiple desktops, the return to the traditional start menu so no longer do you have to use the classic shell add-on (if you were using it at all), you have the addition of live tiles in the start menu and some other subtle changes that may be helpful or not.

Windows 10 is expected to release sometime next year and as with any beta software you can always try it out and see for yourself. If you wish to give it a try Microsoft has the .iso files for you to download and test out Windows 10, you can download the .iso files here. I STRONGLY suggest as I do with all beta software that you do NOT use Windows 10 as your daily OS nor should you use it on your primary machine.

If you do intend to use it at all you can do so in a virtual environment such as VMWare and Parallels if you’re using a Mac and if you’re using a PC you can use Virtualbox which you can download here.Virtualbox can also be used for Mac as well and it just so happens to be the means with which I’m using the Windows 10 preview, you decide which option is best for you (Sidenote: If you install Windows 10 with Virtualbox make sure you choose the Windows 8.1 option to install Windows 10 since it will not be able to recognize Windows 10 as an OS and considering the architecture of Windows 10 is closest to that of Windows 8.1. You may also have to enable the CD/DVD driver option for the install as well)

If you’re like me then you’ll want to try this out. Why not? A new or updated OS is always fun to play with just before its full implementation for a lot of reasons. You get a hands on before a lot of people, you cut the learning curve when the new OS reaches the public and most importantly you’re a geek so that should be reason enough alone. Download it, mess around and enjoy