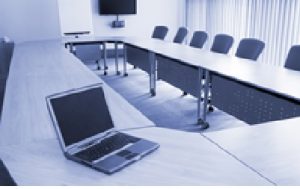 Conference rooms allow for individuals and officers to meet in one place and have a discussion regarding one or more topics relevant to the business or institution. The conference room may be able to hold ten or more individuals all in one room. Generally, other attendees who may not make it to the office can dial in on a bridge so that they, too, can participate in the discussion and share their own thoughts. With many enterprises seeing the benefits of video conferencing, this system has been adopted with 95 percent of offices adopting this technology for their meetings and conferences.

Conference rooms are expected to be a very interactive meeting and video conferencing has allowed for this to become possible. Generally, one can expect remote participants will be joining in using their laptops at other locations and with a few doing so using their handheld devices such as smartphone or tablet. Meetings like this can be had via services like Blue Jeans Meeting but may not necessarily be true for other systems. There have been reports that some handheld devices may not be compatible with a few video conferencing systems. One may be able to see other participants in the conference room but because of lack of other functionality such as front-facing cameras, users of such handheld devices may not be seen by other participants. You may have been in meetings where you hear the person speak up a lot of times but have no idea what he or she looks like. Video conferencing can help change this and help put a name to the face

Conference Room Design
The usual conference room setup will work so long as individuals are all present in the venue, but, audio and video set-up need more attention when using a bridge and video conferencing system so other participants not in the same room can hear and see just as well as those in the same place. It’s important to make sure that each participant has a comfortable ergonomic and durable chair. Webcams with a wider range are better than the more common webcams on laptops which can only focus on one person at a time. It wouldn’t be very efficient to keep moving the webcam from side to side to focus on who may be speaking in the room.

In a conference room, one can speak up to be able to be heard but this may still not work if the audio system is outdated and is not fit to catch all the sound well enough to be relayed over the video. Microphones and bridge systems should be set up in conspicuous places including conference tables, where participants are likely to be seated. Some of this audio equipment can be movable so it can be stationed close to the person speaking or presenting for the group. Quality should be similar to a broadcast studio to ensure that voices are captured clearly during the meeting for everyone to understand the entire discussion.

Outside noise should be eliminated as best as possible and this should be factored in when designing the conference room. Same consideration should be given to lighting. A well-lit room will ensure that everyone can see who may be speaking at the time. Lighting helps project a clear video to other attendees in a different location or room

Point to Point or Multi-point Conference Systems
Participants under a common organization are expected to use the same video conferencing systems but this may not be the case when one holds a conference meeting with participants from another organization, say, a potential client. Point to point conferences simply means a setup where two groups of participants are coming from two different locations whereas multi-point will include three or more groups from different locations.

On occasions when you plan to invite a potential client to a demo or presentation but they may not be able to come personally due to distance or time constraints, a video conference meeting should work fine. To ensure that you get optimum interoperability, availing of services like Blue Jeans Meeting can take care that of that piece so one need only worry about the presentation itself. It doesn’t help if one would ask a potential client to download the software to make video conferencing work as is common with enterprises that uses particular software limited to a few platform users. Even in this day and age, technology may be advanced but some users will still need help from IT to make it work. More often than not, some executives leave it up to their IT teams to figure things out and one may not have that luxury in this instance especially if they plan to use their mobile phone or tablet instead of their office laptop. In a study, it mentioned that only 7 percent of mobile phone users have tried video conferencing.

These are the basic factors to consider when planning video conference meetings. Once you get this right with the correct equipment and set up, expect a more meaningful conference meeting which would entail less cost and more returns in the long run. This also may be of interest to you