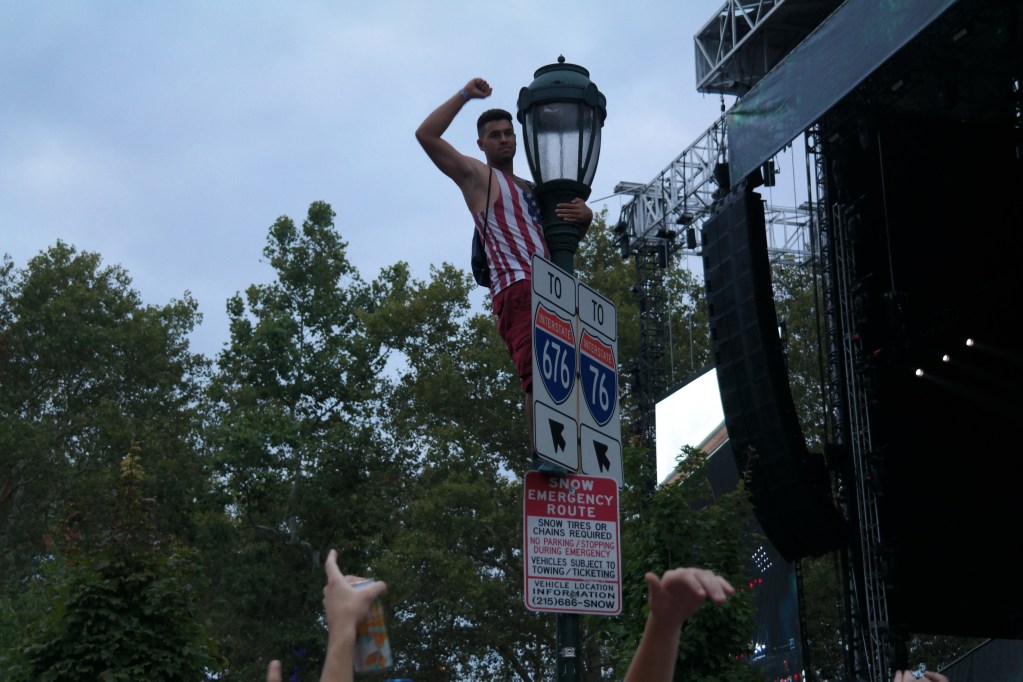 This year was the 3rd time Philadelphia hosted Made in America and was the first time it was being held in Los Angeles. What made it more interesting was they were going on simultaneously. If you haven’t heard of “Made in America” its a two-day from afternoon to close to midnight music festival. There are music genres spanning rock, pop, hip hop, r&b, and a lot of EDM. The festival was founded back in 2012 by Jay Z and Steve Stoute to bring an interesting mix into the city. Usually these type of festivals are done off-road on a field or huge park area, but never been done right in the middle of the city. This was actually my 2nd year going and had a ball last year. It opened my ears to different types of music and I realistically love the huge crazy crowds jamming out. There are three stages which is Freedom, Liberty, and Rocky that are playing music at the same time. Actually there was a smaller stage near the skate park that played some smaller acts also.

Day 1 I was able to check out some Destructo, Cut Snake, and Steve Aoki for EDM. Hip Hop consisted of some old school Big Daddy Kane, J Cole and headliner for the night Kanye West. Day 2 was even more of an interesting mix with Kongos, YG, Penguin Prison, Danny Brown, Girl Talk, Pharrell Williams, Tiesto, and Kings of Leon. 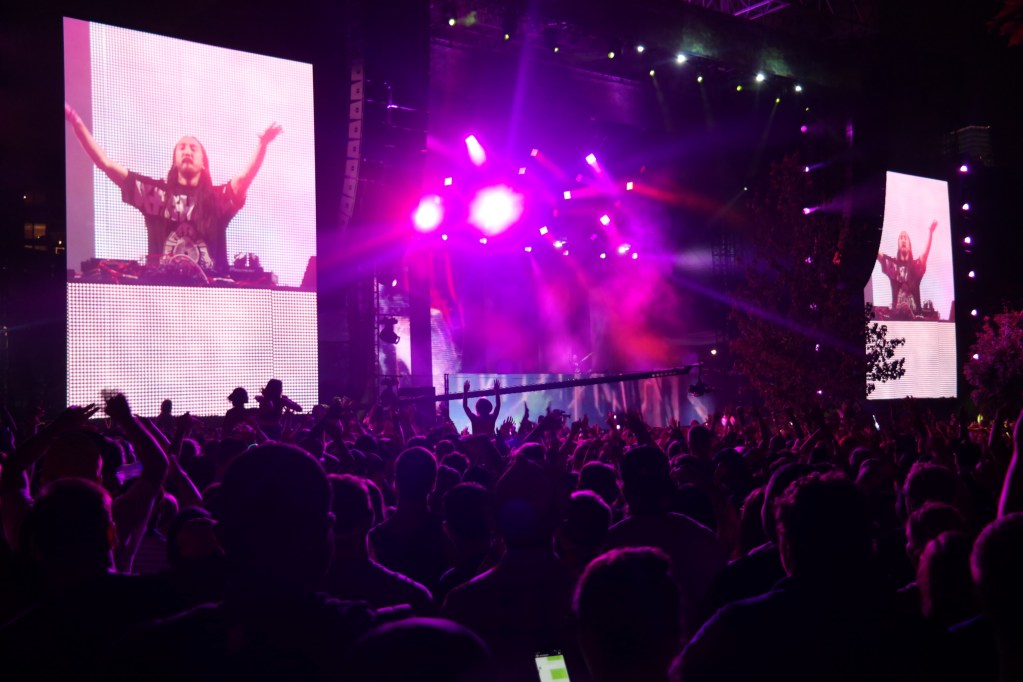 Destructo‘s set was derived mostly of other popular tracks and putting his own spin on it which got the crowd hyped. J Cole started his set off with “Be Free” which is a tribute to Mike Brown and all things associated with police brutality. He had video onscreen showing the circle of violence that has taken place over the years. Afterwards he came out on stage and did his tracks energizing the crowd with songs like “Power Trip”.   Steve Aoki had the crowd reeling with his psychedelic mix of colors on set and his usual cake throwing antics while doing “Freak” and others. 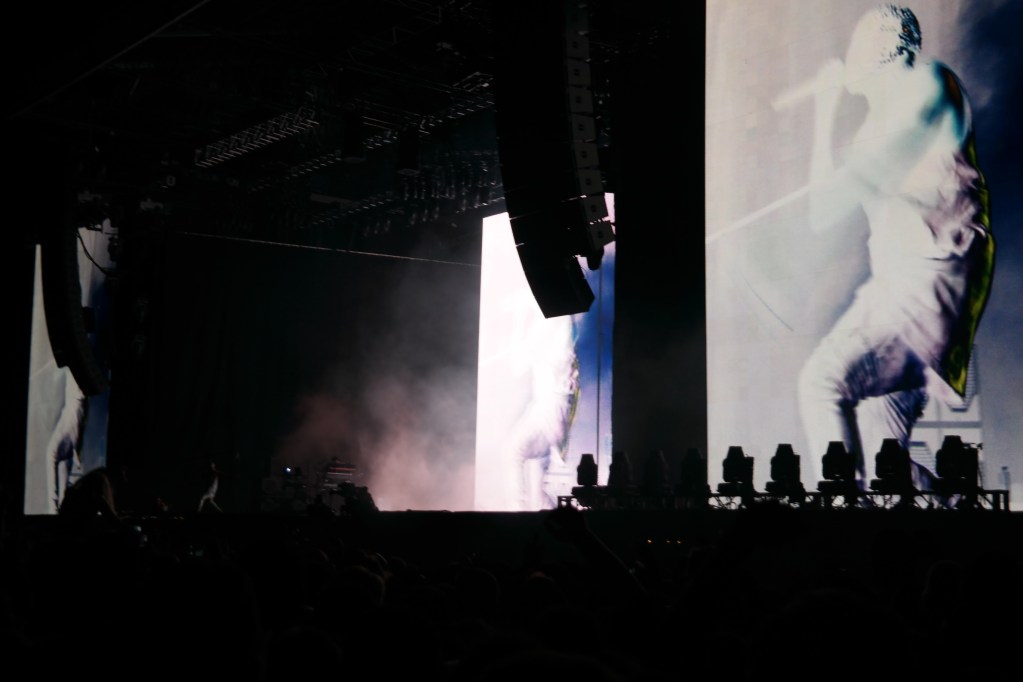 To end off the night would be none other than Mr.Yeezy himself. He started off with songs like “Don’t Like”, “Stronger” and “Power” which not only had the people chanting but the dual screens had polarizing(negative) effects for the whole show. It looked crazy whether Kanye performed with his usual bejeweled masks or it would pan out into the audience. And it wouldn’t be a Mr.West show without his rants. While they weren’t longer than ones I seen for the Yeezus concerts which spans over 20 minutes, these were about 5 minutes but at times I felt killed the energy for the audience at times. Otherwise it was a pretty good set and he went from “Yeezus” all the way back to the “College Dropout” album. 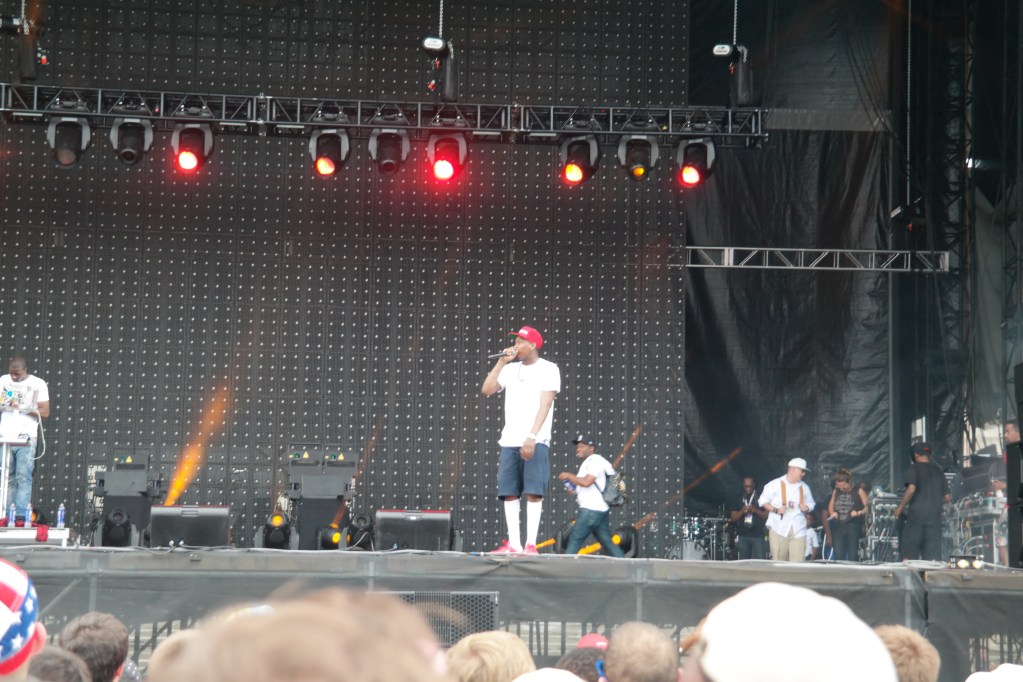 The next day seemed to be a test for fans with forecasts showing chances of rain to take place during the day. Was able to rock out to one of Kongo‘s most known songs “Come With Me Now” while heading over to west coast rapper YG‘s set at the Rocky Stage. He performed hits such as “Who Do You Love”,  “My N***a”, and “Don’t Tell Em”  which had the crowd going but it didn’t last long as he would only do one verse. Half his set was like this while the other was giving tribute to other rappers. He even left before his scheduled timeframe. So much more could’ve been done or just didn’t seem to care. 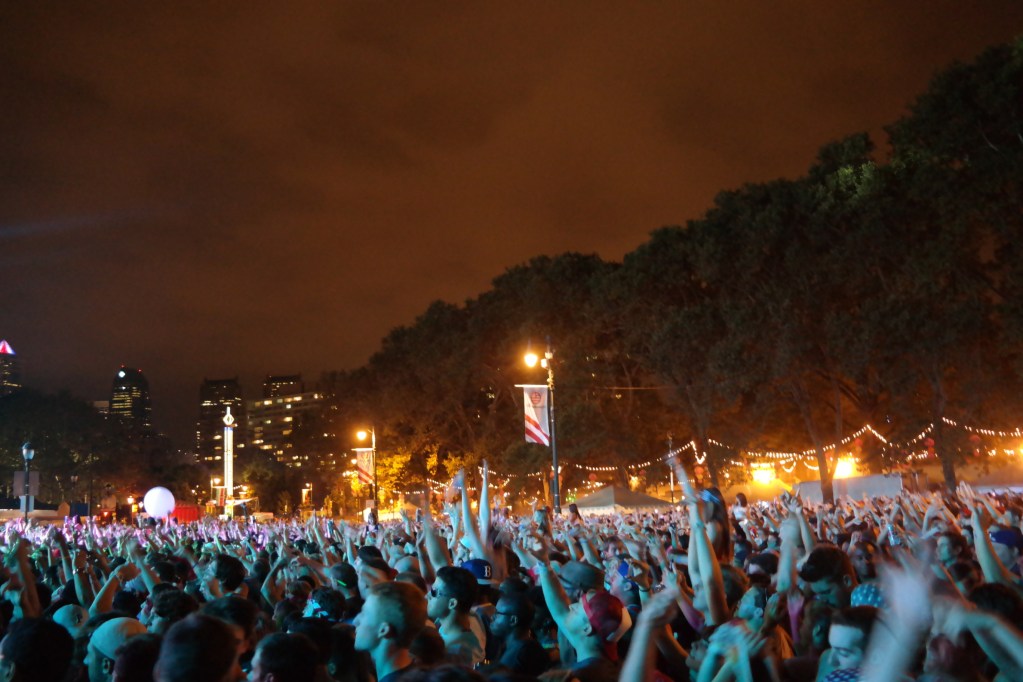 Before the rain eventually hit us we got to see some performances from Danny Brown with his wild goofy rapping but we didn’t even know he was coming out at first as he had his DJ Skywlkr hyping the crowd up. Coming back later on I caught a EDM performance on the Freedom Stage which I believe was 3LAU. It was pouring and we didn’t even care all the music thumping. Girl Talk had a party atmosphere as the rain dissipated, and the humidity kicked in and it started to dry up. They had beach balls, confetti and even had fellow Philly native Freeway do a couple of his own songs. I wish we could have seen more Philly natives do cameos throughout the show.

Pharrell had the ladies lined up and he may have had more women on stage performing during his set then any women on stage at both sites. He went through songs he guest appeared on such as “I Just Wanna Love You” and Daft Punk’s “Get Lucky” and “Lose Yourself to Dance”. He did a bunch of tracks off his current album “GIRL” which were “Gush”, “Marilyn Monroe” and closed out the show with “Happy”. It was an entertaining hip hop affair until we got back into the EDM mix with Tiesto. 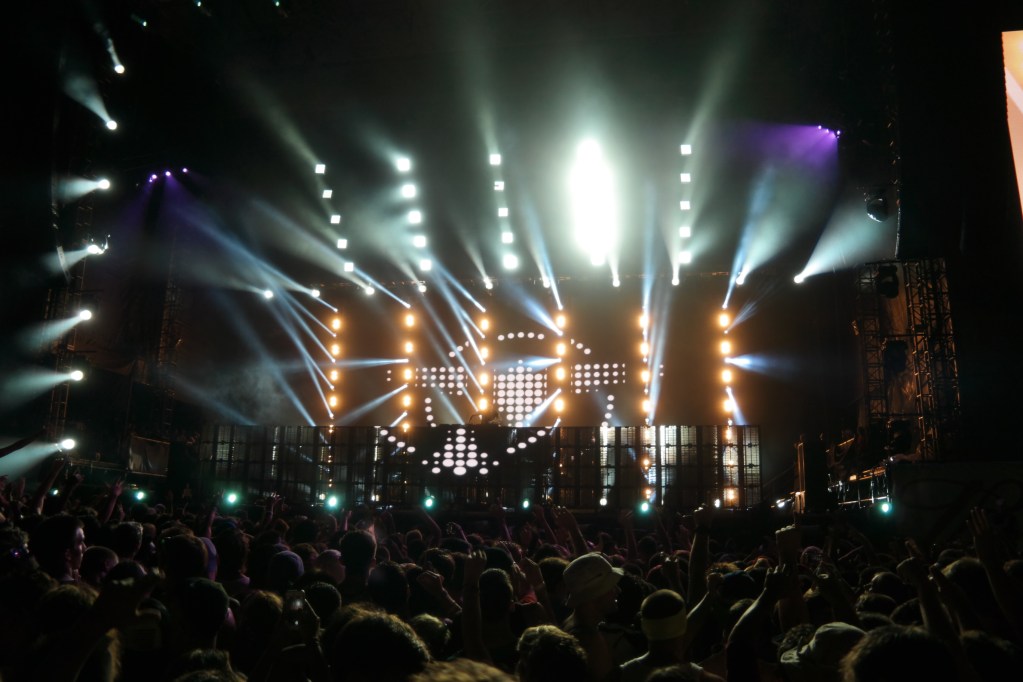 I think everyone that loves EDM was really there for Tiesto. The crowd chanted his name way before Pharrell finished his set and was probably the hypest I seen of the audience there that weekend. Performing songs like “Freaks”, “Red Lights”, and “Traffic” the crowd didn’t stop partying till he finished all his songs. This crowd was so crazy they even uprooted a tree and crowd surfed it around. It may be one of the wildest things I seen happen at a show. But the audience kept going. Kings of Leon closed out the show and as I seen when Nine Inch Nails closed out last year the audience wasn’t as huge. Seemed like when Tiesto left as did a lot of the crowd. Kings of Leon still did their thing and placed some awesome songs from their catalog to close Made in America in Philly. 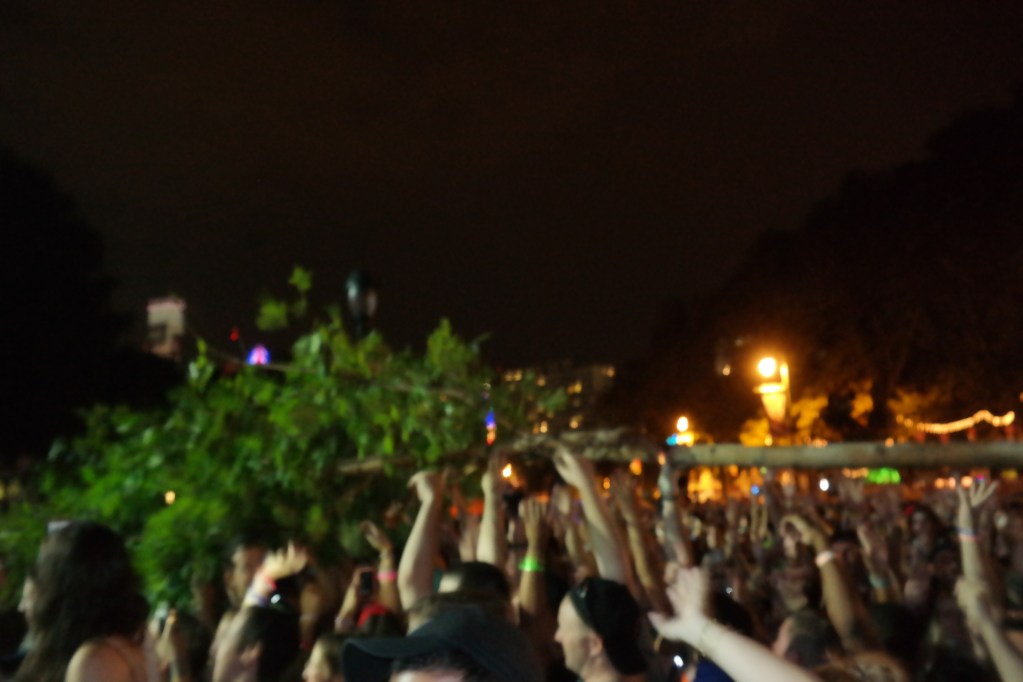 With this being my 2nd year at Made in America I felt like the venue was handled pretty good. They kept free water hydration stations going, there was plenty of food trucks and even the sets were timed to meet right into another sets. Being there you know you cant catch them all but I felt I got to see everyone I wanted to. Major prop goes out to the Made in America app. It gave you set times for both venues, where they would be performing and even provided updates when there was a stoppage for the show and advised you when the show was back on. I expected a festival of that magnitude to have a faulty app as I been to shows with lesser people but it worked like a charm.