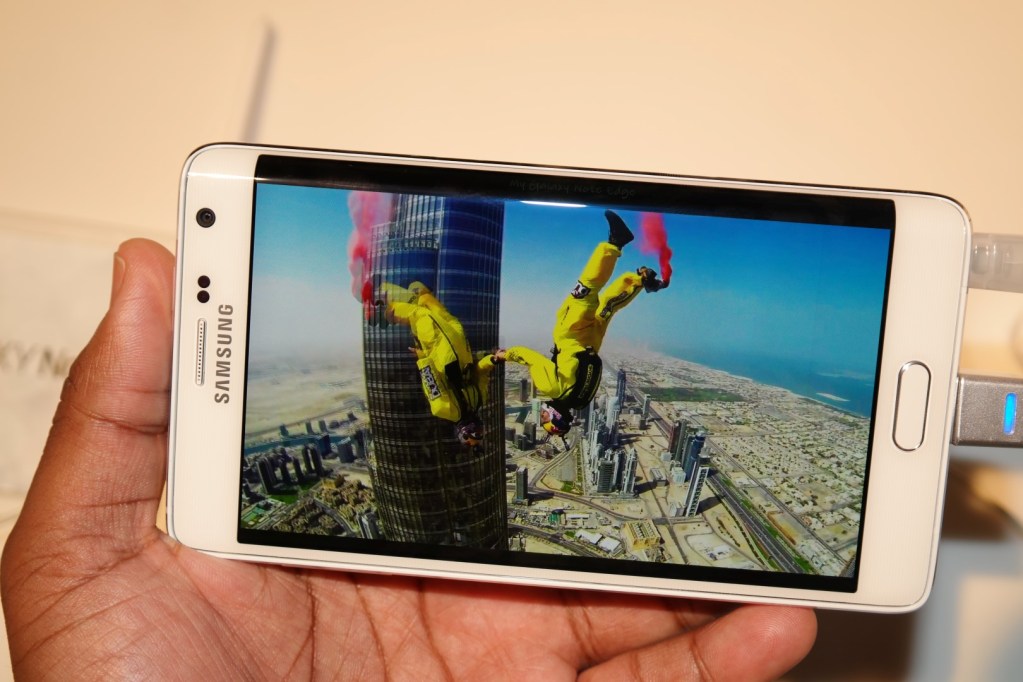 Since the rumors of the Samsung Galaxy Note 4 surfaced for months and months with spec sheets, leaked photos and even video. I wasn’t even surprised too much about the Gear VR as there was news of that for a good bit. What did catch us all off guard is the GALAXY Note Edge. If you remember Samsung was testing out curved screens like the one used in the Note Edge a couple of years back. Interesting to see it implemented into the Note series and alongside the Note 4 at that.

The Samsung Galaxy Note 4 goes from a 5.7″ 1080p display to a QUAD HD display of the same inches for up to 2K display of video. Screen looks gorgeous and did take a browse through some websites and some videos on YouTube. Unfortunately wasn’t able to test out any 2K videos as I imagine YouTube app isn’t updated to support this newly announced Note devices yet. Camera is 16MP on the back with a 3.7MP front facing camera. Storage will be in options of either 32GB or 64GB with microSD card support of 128GB. Battery life is 3,220mAh and has Adaptive Fast Charing capabilities. You are supposed to be able to charge your Note 4 halfway in 30mins. With the Note series always having great battery life this will be good to see to keep you from needing to hug the wall later.

The Galaxy Note Edge has just about all the specs listed above just that it will have a 5.6″ Quad HD display, 3,000mAh battery and oddly says it only supports 64GB microSD cards. It remains to be seen how true that last bit of information holds up. Playing with the Note Edge in hand it has a nice light feel to it and the slight edge or curve can be used for notifications or to even access additional applications.

The Gear VR is like the Occulus Rift aka VR headset and will be implemented by Samsung to give you some of the best indepth video around. As developers gets hands on it we can imagine tons of applications to give you different experiences with the Gear VR. As of right now it will only work with the GALAXY Note 4. I imagine or hope it will work with some of the other devices such as the Note 3, S5 and even the S4. Time will tell though with this one. I did try the Gear VR on and its pretty comfy on the head for the little bit of time i wore it.

Samsung’s next version of wearable watch technology comes in the form of the GALAXY Gear S. It will have a 2.0″ display and a battery life of 300mAh. It will be running Samsung OS of Tizen and its storage capacity will be 4GB internal and using 512MB RAM. This will be Samsung’s first watch that will allow for phone calls with the option to pop in a sim card. I wonder if consumers will now use this as they been asking for it so much. It will carry a IP67 rating for water resistance and dust.

Out of these four newly announced devices which one peaks your interest the most? They are slated for “Fall” but no specific date is given. Once we get more information we will definitely keep you guys posted.