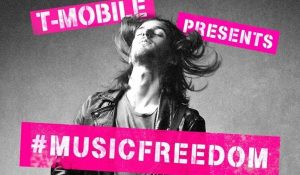 Today T-Mobile announced the results of its social poll for what other music services should be added to its Music Freedom initiative. It looks like three-quarters of a million people voted and Google Play Music is on track now to be added to the list of service which currently include; iHeartRadio, iTunesRadio, Pandora, Rhapsody, Samsung Milk, Slacker and Spotify. This is of personal excitement for me as I use Google Play Music All Access on the daily basis. So soon I’ll be able to listen to music all the time without even touching my data limit. However don’t expect it to be there tomorrow, as T-Mobile says it is on track to add the service to Music Freedom later this year.

T-Mobile also announced that six new services were added as well and those are AccuRadio, Black Planet (wow they are still around!), Grooveshark, Radio Paradise, Rdio and Songza. Since Music Freedom’s arrival just two months ago, T-Mobile customers have streamed nearly seven thousand terabytes of music and 5 million more songs per day than before the launch. Very nice indeed! See the full press release below!

T-Mobile Cranks Up the Volume on Music Freedom

Un-carrier doubles the number of music services you’ll be able to stream without ever hitting your LTE data including Google Play Music, reports massive surge in music streaming on its Data Strong network

BELLEVUE, Washington – August 27, 2014 – T-Mobile today announced the first major expansion to its Music Freedom™ program? doubling the number of music streaming services you’ll be able to use with its landmark music streaming offer. Starting today, six new music streaming services – AccuRadio, Black Planet, Grooveshark, Radio Paradise, Rdio and Songza – are all available as part of T-Mobile’s Music Freedom, so Simple Choice customers can stream all the music they want from these services – all on T-Mobile’s Data Strong™ network and all without ever hitting their LTE data bucket.

In addition, T-Mobile announced the winner of its social voting poll, designed in true Un-carrier™ fashion to let customers decide which services they wanted to add next. After nearly three-quarters of a million people voted, Google Play Music topped the charts as the most requested service. T-Mobile is on track to add Google Play Music to the Music Freedom program later this year.

“When the big ‘carriers’ look at music, they see an opportunity to use someone’s passion to make a buck. When the Un-carrier looks at music, we see an opportunity to set customers free from the tolls and limitations those carriers impose,” said John Legere, president and CEO of T-Mobile. “Our goal is nothing less than to set all your music free, and we’re well on our way.”

Just two months ago, in June, T-Mobile shook up both the mobile and music industries with Un-carrier 6.0—a move that took a wrecking ball to the restrictions some traditional carriers place on music streaming with their data limits and overage fees.

And if early results are any indicator, it’s clear T-Mobile customers are embracing their newfound music freedom with gusto. In fact, to date customers have streamed nearly seven thousand terabytes of music since the launch and are streaming 5 million more songs per day than before the launch of Music Freedom.

“T-Mobile’s Music Freedom and services like Grooveshark are about bringing music accessibility to the consumer,” said Sam Tarantino, Co-founder and CEO of Grooveshark, “Together with Music Freedom, Grooveshark is creating a new kind of music discovery on T-Mobile devices. We believe the combined global audiences of millions represents a new and engaged audience for Grooveshark on T-Mobile.”

About T-Mobile US, Inc.:
As America’s Un-carrier, T-Mobile US, Inc. (NYSE: TMUS) is redefining the way consumers and businesses buy wireless services through leading product and service innovation. The Company’s advanced nationwide 4G LTE network delivers outstanding wireless experiences for customers who are unwilling to compromise on quality and value. Based in Bellevue, Washington, T-Mobile US provides services through its subsidiaries and operates its flagship brands, T-Mobile and MetroPCS. It currently serves approximately 50.5 million wireless customers and provides products and services through approximately 70,000 total points of distribution. For more information, please visit http://www.t-mobile.com.