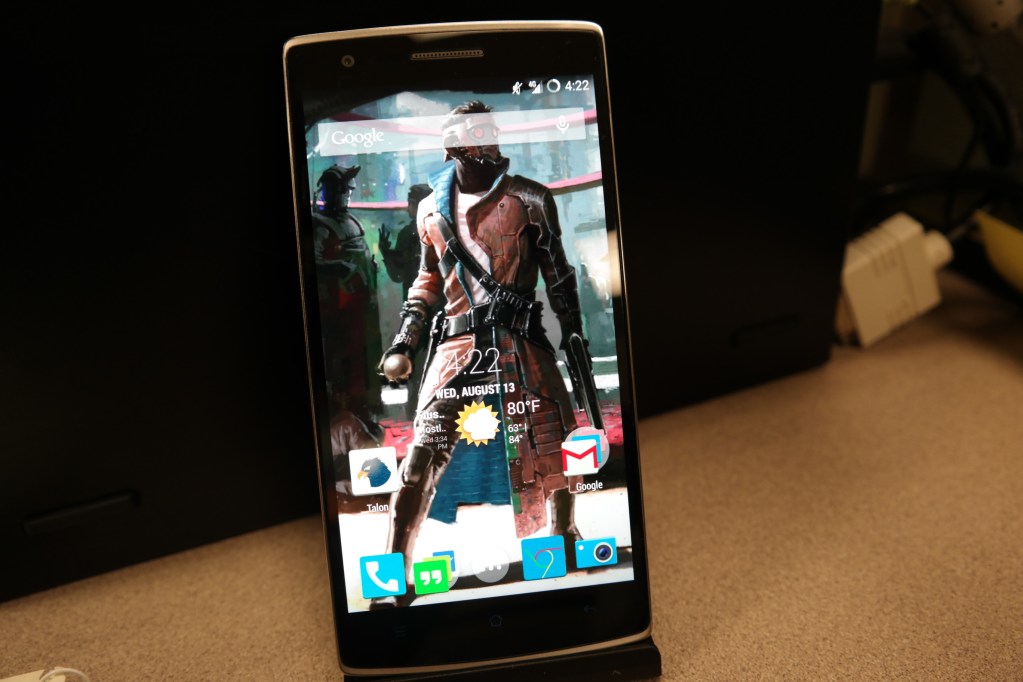 If you haven’t heard of OnePlus there is good reason. OnePlus was founded by Peter Lau who was previously VP of electronics company OPPO. These companies aren’t heard of in the US with such names as Samsung, Sony, LG and the list goes on. So what makes the OnePlus One better than any other smartphone coming from across the globe? It’s all that has been put into the phone itself. The OnePlus One was boasted to push with premium specs at a budgeted price ala Google’s Nexus 5. And it’s not even just the pricing its the ability to grab customization by the horns and not worry about bloatware getting in the way. Is the OnePlus One the only “One” you need? 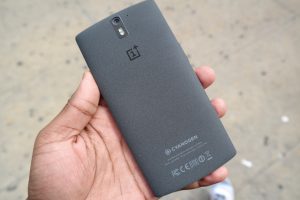 I remember watching the video of the OnePlus One being built and it showed the crafting of the device and felt like it looks good but wont turn out like that. I was sure enough wrong. Pulling the OnePlus One out the box I was vastly surprised of how detailed it was. The One had a nice feel to its body and its silver trimmed border looked great but what’s more impressive is the back cover. As this is the “Sandstone” model, it has rough brushed feel to it but not where you would get sick of it or feel would deteriorate over time which I expected. It adds a subtle touch of grip and helps the OnePlus One carve its own identity. It does have that FCC branding on the back which is an eyesore and its “OnePlus” insignia is etched near the top under the camera. Another thing to take notice is its 5.5″ JDI 1080p display and giving off a high 401ppi. There have been reports of customers getting “yellowing” on their screen but I luckily didn’t come across this issue. Screen resolution is impressive and images and videos look great on it. While the Samsung Galaxy S5 does have a more vivid screen thanks to it using a SUPER AMOLED screen it still looks good. If you don’t like the way the OnePlus One looks though there is options to edit the screen display to your visual liking. 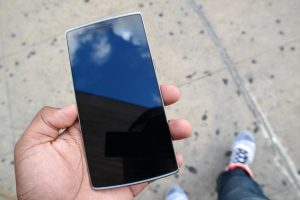 This is where the OnePlus definitely shines above the rest. It’s a behemoth in the specs department with so much under its slim small hood. It has a Qualcomm Snapdragon 801 processor, 3GB RAM, Adreno 330 GPU, 3100 LiPo mAh battery, and 64GB of internal storage(16GB supposedly available soon). Surprisingly there isn’t any wireless charging or even microSD support. It’s not hard getting all these pieces of tech together but it’s highly surprising at its price point. Running through task after task is no problem whether I’m sending out 100s of messages via Hangouts or watching a movie or two using VLC Player or MX Player I haven’t experienced any lag. Battery life has been kind as I have pushed a day and change of use with the OnePlus One. On the bottom of the OnePlus One is dual speakers that actually pump out sound. I though it may have been like the Nexus 5 where only one is providing sound but they both work and sound pretty good. It’s not trumping the HTC One M8’s BoomSound speakers but its better than any other mobile phones out there.

The OnePlus One is considered a global phone and you can pop in a microSIM and be good to go. I used it on the T-Mobile network and got the same service and speeds I been getting when using my daily driver phone the HTC One M8. 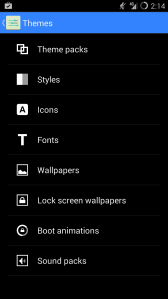 Best thing about the OnePlus One is the OS it’s using OnePlus teamed up with popular Android ROM CyanogenMod. If you are unfamiliar CyanogenMod is rooted(or jailbroken in iOS terms) smartphones and allows you to access features you might have been able to tap into before. The best thing about the OnePlus is you don’t need your device rooted and you still take advantage of the goodness it provides.

The CyanogenMod version on the OnePlus One is CM11S and is based on Android’s Kitkat 4.4.2. The customization options in CM11S is endless. You can customize boot screens, lock screens, icons and themes and you don’t need a launcher to make these changes. While some will give you issues I love it as I can always make changes on the fly and don’t have to rely on a 3rd party to get it done. CM11S also has taken the best of other Android OSes to make it an easy smooth transition. You can decide to have onscreen menu keys or capacitive buttons on the device itself to save screen real estate, gestures can be done on the screen such as a “V” will turn on the Torch(flashlight), 2 finger pull down turns on music and drawing a circle turns on the camera.

If you are interested in taking pictures the OnePlus One’s 13MP shooter isn’t a bad one. It’s not just 13MP but its a Sony Exmor IMX214 lens. The front camera is capable of snapping shots with its 5MP lens. The OnePlus One’s camera took great shots whether it was in a low light setting or in the great outdoors. I also enjoyed using its HDR setting which did terrific on enhancing some photos which you can see below. There are a ton of features which you can play on here and is sure to keep you busy.

Now with all these great features on the OnePlus One there is this lingering issue that has continued on since its “launch” months ago. Access to the device can only be obtained by invite only. There is a long list of hungry customers waiting months and months to get their hands on the OnePlus One. Actually I obtained my OnePlus One through an invite that popped into my email one day a few weeks ago. I understand the supply and demand thing but its at point they need to get more out there. Also these contests ranging from “Smashing your Phone” or the most recent and quickly cancelled “Ladies First” campaigns are just bad ways of trying to market the OnePlus One and get it out to the masses. 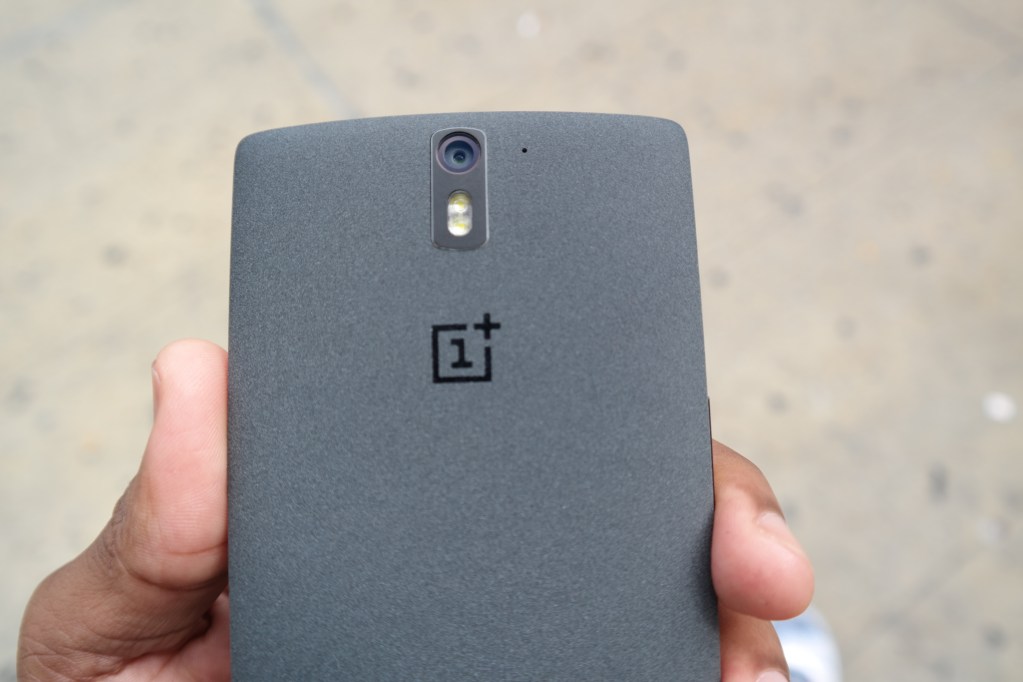 At the price of $350 ($299 for 16GB), the OnePlus One trumps the pricing of the Nexus 5 which was $350 for just 16GB. It’s a piece of tech that is phenomenal and if pushed out there could one of the best phones on the market. Unfortunately trying to get one is its biggest problem and its marketing ploys are putting the company in a bad light. But if you can get your hands on a OnePlus One at retail price its well worth the money and you should be happy.