Everyone loves to play a card game. The various games you can get emerged in have been passed down over the years by people playing with friends or family. It is one of the most popular pastimes for most people and also continues to be played around the world on a daily basis. Different countries will call the games different things, and even have slight changes in the way that they play them. But either way, the same deck of 52 cards is played in various ways all over the world. It is a game that brings people of different cultures together.

The deck of cards and number of different card games has been around for so long now that people forget the history of that famous deck. They have a rich and mysterious history. Early examples of the cards can be traced back to countries such as India, Persia and Egypt. A lot of people think that they first originated in China. There is a lot of debate as to where they originally came from as the Chinese invented the paper and the printing. Traces of them can be dated back to China as far back as 1294. They finally ended up in Europe but most historians believe it lies within these countries that the deck of cards was born. 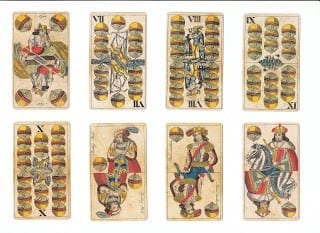 The designs of a European deck of cards seem to derive from Egyptian designs from the 14th Century as reported by Ladbrokes here. There are a lot of similarities between these, even now. The old deck still had 4 suits, with swords evolved into the clubs of those found in today’s decks. Many different countries were eager to involve some if their own culture and style into the designs and this is evident within the many styles that there have been over the years. Acorns, Hawkbells, Hearts and Leaves found on the German decks for example are a sign of their German price and love of their natural surroundings.

Playing cards have been around in Europe since the 1370’s. Some of the earliest packs were very expensive as they were hand painted. A lot of people believed the different Kings represented a king in history, for example the king of clubs was Alexander the Great and the king of Spades was King David from the Bible. The king of Diamonds was Julius Caesar and the king of hearts represented Charlemagne. A more in-depth timeline was produced by The Guardian

There are many different ideas as to where they have originated from, what each design means and speculation as to who the actual original maker was of these cards. They have been around and will still be around for many years to come, offering us a lot of entertainment.