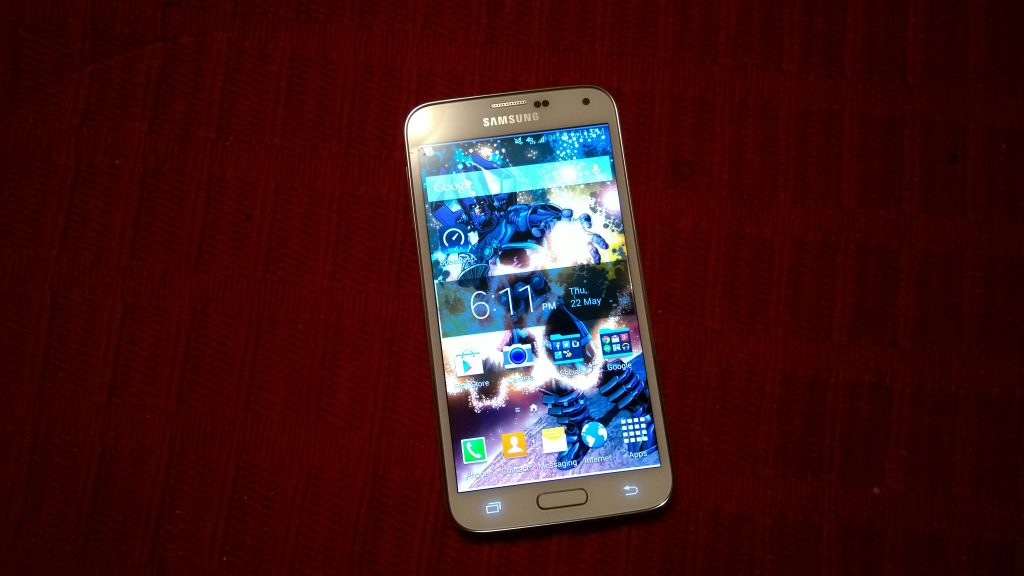 Every year we wait for Samsung’s latest entry in their signature flagship Galaxy S series and expect something new in regards to hardware build. This time around we were waiting for various versions of the S5 including a metallic body similar to the HTC One M8, 4K displays, and a host of other bells and whistles. While we didn’t get any which I mentioned, the latest iteration in the Galaxy S was improved on some things which I will get to later. The real question is the Samsung Galaxy S5 worth your upgrade?  Will it stopping you from looking towards other competitors such as the HTC One M8, Sony Xperia Z2, upcoming LG G3 and others? 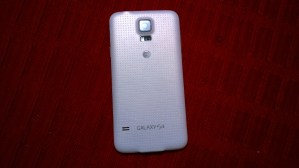 If you were looking for a revolutionary change don’t get too thrilled. The Samsung Galaxy S5 moves away from the shiny plastic backing of the S4 and you more of a smooth textured backing with little dimples. Some have associated it with band-aids and there are some interesting comparisons on the net to look at. In the end its still plastic just flashed up a bit like they did with the Samsung Galaxy Note 3 and its pleather experience. Besides that, on the back is a heart rate monitor sensor for your finger, speaker port for sound and 16MP shooter(which we will get into later). If you move towards the bottom you have a USB 3.0 port with a flap that seals to coincide with the phone being waterproof. I have splashed some water on it which is what’s good for, but don’t go deep sea diving. Going back to the USB port, its quite a nag though, as trying to pry it open can be a chore if you don’t have long enough nails. Run your fingers on the sides and there are the familiar volume and power toggles, while on top is an IR blaster and headphone jack. One thing to point out about the S5 is its ridiculously light, with the S4 originally weighing 145g, the S5 comes in at a feathery 130g and the difference is felt.

While I would of loved a different build on the S5, sometimes keeping it safe and not changing is what has kept Samsung in the game and where it stands. Least with the plastic backing you can still pop that off and get access to the 2800mAh battery, micro sim card and add up to 128GB of microSD storage and they seem to handle drops a bit better. Also make sure you snap that back cover tightly on or you could risk some water getting into your device. 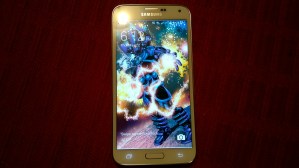 Nothing as changed much from the display on the Samsung Galaxy S5 besides it grown an inch now standing at 5.1″. Side by side it looks almost identical to the S4 and has a 1080p SUPER AMOLED resolution with 432ppi. Now we had wished for 2K displays but the S5’s screen still does the job in regards to response time, and giving vibrant colors. Reading text comes off just fine and fully legible. I been using it to watch movies and watch videos on YouTube in HD quality and haven’t had any complaints in regards to it.

So whats making this bad boy tick? Its using a Qualcomm Snapdragon 801 quad core processor, 16GB built-in storage and 2GB RAM. I was surprised that it wasn’t given 3GB like its bigger cousin the Galaxy Note 3, and was hoping we stop seeing phone starting off with 16GB, but those days are still around. When you get started with the phone you are left with a bit close to 11GB of internal storage. Sure you could always get a huge microSD card and move files but it doesn’t always work as easy as you want. 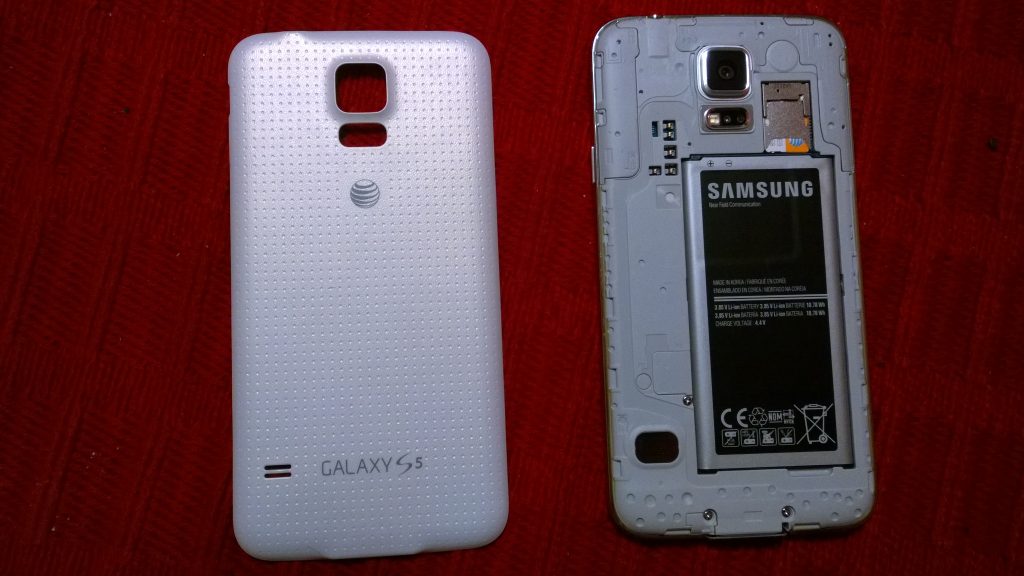 I will say this is the first Samsung phone I have and didn’t experience what I have called “Samsung lag”. Maybe if it was how TouchWiz was baked in, but the S5 runs like a dream and doesn’t give up. Battery life is on point and if you are trying to maximize it even more there is Power Saving Mode, but then there is Ultra Power Saving Mode. Turn that on and everything goes to gray and you get a few limited apps on your home screen. If you feel the S5 is on the verge of death and you’re a power outlet away, then this is a lifesaver.

Testing out the AT&T version, call reception was clear and downloads were speedy as they always are in New York City. I actually used it in all five boroughs and didn’t experience any difficulties with the service. I did find the LTE to be not as strong as usual though when I have used it in the past. If you are interested you can see how coverage ranges in your area HERE.

TouchWiz has always been a “hate it or love it” OS depending on your taste. While it does have a ton of features, it always felt like it could boggle down the device. Looks like Samsung has worked pretty good incorporating Android 4.4.2 aka Kit Kat into its TouchWiz OS lifestyle and has made a speedy product. Navigating screen to screen has bared no lag, as well as using various applications. Before I felt the need to use different launchers but haven’t done so thus far.

The Notification panel is always welcome but going into the options can leave you with pages and pages of selections. I mean when there is an option of if you want Grid View or List View for your options setting alone that’s crazy. Trying to find stuff can be a task and will continue to be till you get fully accustomed. 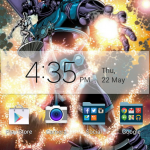 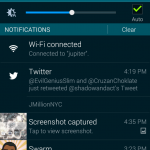 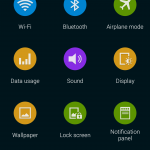 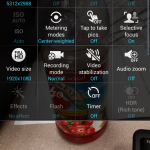 I did give the Fingerprint Scanner a whirl and sometimes it would work good and other times its a bother. Its not like how the iPhone is where you just place your finger on it, but instead you are sliding your finger down on the screen itself partly then on the action button. Do it too fast or slow and back to square one. Hopefully some improvements are done in the future but I ended up turning it off after a day.

One of the features that originally caught my eye was the Download Booster feature which combines your WI-FI and Network connection and gives you powerful downloads. Unfortunately this option looks to only be available on the T-Mobile version, but don’t fret there will be a article in the future for that. Also AT&T has bloatware all over this phone as usual. You can disable a decent amount of them though, but I feel the option should be given to the consumer.

One thing I tend to put into use on smartphones is cameras. Whether its picture snapping or video shooting, I always put some work in on them. The camera for the Samsung Galaxy S5 comes with a 16MP shooter on the back and 2MP on the front. The features aren’t too different then its predecessor besides being more organized. I’d like to seen OIS on the Galaxy S5 which would of been a nice addition.

Pressing the “Mode” button gives you six choices ranging from the Dual Camera shot to one that’s new called Virtual Tour. It involves taking multiple pictures after each other and giving you sort of a video tour while placed out. I could only see it used in a couple scenarios like for a hike or walk but nothing more. HDR is still great on the S5 for getting high detailed shots. Selective Focus is supposed to be blurring shots in the background or in the forefront. Its not bad, but works much better on the HTC One M8 with its Duo Camera.

Video shooting has always been a go-to for Samsung devices with me. I remember using the S4 last year at a event and putting it online and you wouldn’t expect it was done with a smartphone. Same can be said with the Galaxy S5 except this time you have 4K capability as well. While some of the video I shot isn’t too crazy it gives you a idea of the detail the S5 picks up which you can check below.

I was able to get my hands on all three Gear models which was the Samsung Gear 2, Samsung Gear Fit, and Samsung Gear 2 Neo. Syncing was on point with all three devices but stay tuned for a full on review of each device coming shortly.

Samsung seems to be getting back to improving their overall devices in the performance realm like their older devices such as the Galaxy S2 and even S3 that gave them their claim to fame. While there is a still a boatload of gimmicks and features you may never use on the Galaxy S5, it still holds up as a worthy Android smartphone in its own right. Battery life is on point, display looks good, and its slim and lightweight. Its build doesn’t make it stand it out much but some people don’t want change and will and have seen many upgrade to the S5 over other devices with ease. The old saying goes, “If it’s not broken, dont fix it”.

The Samsung Galaxy S5 is available for $199.99(w/ 2yr contract) on AT&T and other the four carriers such as T-Mobile, Verizon, and Sprint for various prices as well.