Today Foursquare has released a Swarm upon us, but it isn’t a partnership with Wu-Tang and the Killer bees aren’t about to descend on us once again. Instead they have decide to spin out of their Foursquare app a new one called Swarm. Swarm takes out of the main Foursquare app the ability to check into places, see who is nearby to meet up with, and brings in some cool items like stickers. But how will these functions do in their new home? Will having to use two apps be more helpful or an annoyance? 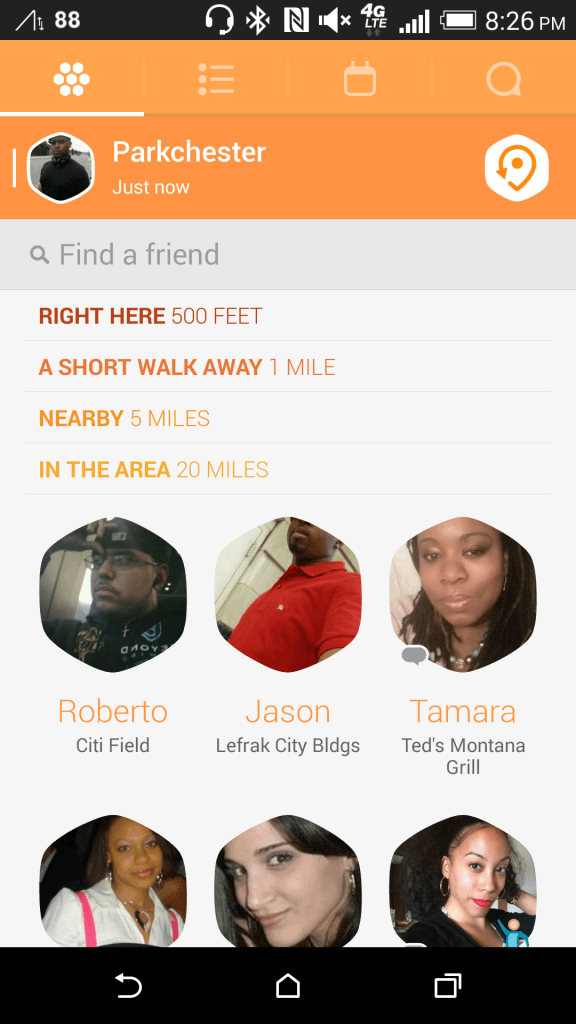 I’ve been using the Swarm app now for about a week and have been using it for all my normal daily uses. For me the Swarm app use case is perfect for me. While I do like all of Foursquare, I’ve use it to find places to eat and things to do only once in the blue. But when it comes to checking in and see where my friends are, this is something I do quite often. So being able to use this and focus directly on the items I used Foursquare for work out well here. The color scheme is definitely something to get use to though. While I have nothing against the color orange, I quite liked the blue scheme of Foursquare. It would be cool if I could choose my UI color and keep the classic color scheme of Foursquare.

Color scheme aside, the Swarm app looks pretty cool. When you launch the app, the first thing that catches your attention is immediately which of your friends are close or around you. Swarm breaks it down into Right Here (within 500 feet), A Short Walk Away (within 1 Mile), Nearby (within 5 miles), In The Area (within 20 miles), and Far Far Away. When you enter the app at a glance you can see who is close enough to maybe connect with and meet up. Right from there you can click on them, see their last checked in location, send them a message via Facebook Messenger (if they have it connected), call them, or send them a SMS message. You can also comment on their checkin or like (heart) it.

Once we are finished with the home screen, the Swarm app is broke down into 4 sections. The home screen where you see who is nearby, the feed screen which shows you a list of recent checkins, the plan screen (will talk about that more), and what I like to call your notifications/comments screen. The feed and notification/comments screen are things we’ve seen before in Foursquare so won’t go all into detail there. But the new feature is the Plans screen. This is a new one and focuses on your nearby friends. It allows you to create something that is happening, no invite list, just open-ended. It could be as simple as “stopping for coffee in the city later, anyone want to join?”, and then people can reply with their own comments of click on I’m interested to let you know of any potential connections. I think this would be cool to use, but I wasn’t able to fully try this out yet, one of the downsides of using an up before anyone else. No one to really try it out with yet, but definitely would be interesting to see once more people come on board.

My Experience With Swarm 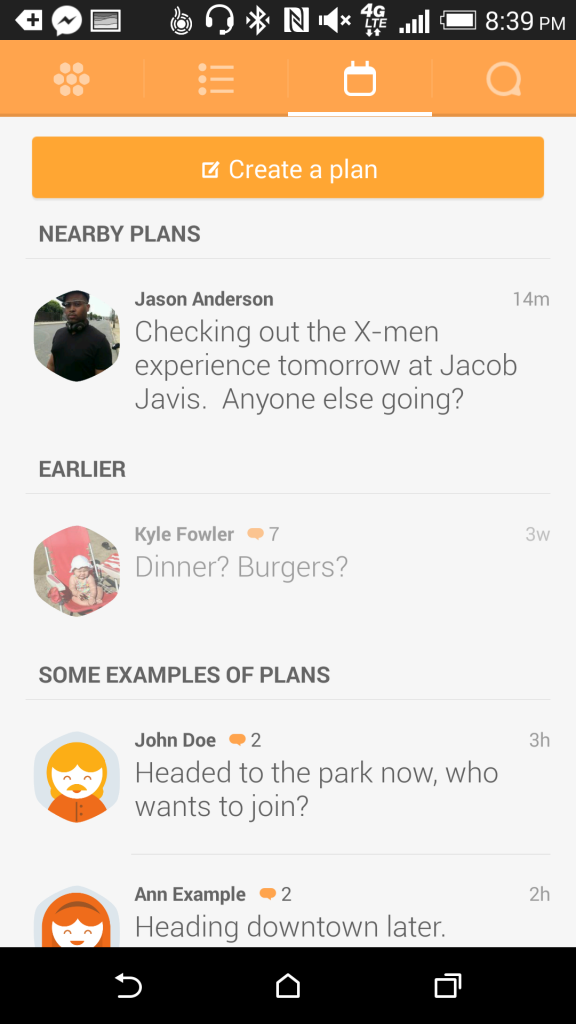 Well now that is the jist of the look of Swarm, but since I have been using it for a week now, what’s the experience like? I quite enjoy using Swarm. For one the checkin process is a lot different. I don’t have to explicitly checkin to a place to let people know if I’m nearby. With Swarm people can see the neighborhood in which I’m currently moving around. This can of course be turned off as well and then people can only see when you check in. If left up, as you move around the app will update the neighborhood where you presently are. During my use I’ve see it say I was in East Bronx, Murray Hill, Upper East, Turtle Bay, Midtown East, and more as I’ve moved around. Now don’t get me wrong, you can still checkin, and I do some quite frequently, but now when you do the Swarm app will suggest a venue it thinks you may be in. If it didn’t guest correctly, you can choose Change location and select nearby locations just as you would from within Foursquare. Once a venue is selected, you can enter in a message, take a image, and now choose a sticker that represents your mood at this time and complete your checkin. One thing I noticed different in Swarm from Foursquare, you don’t have to decide before you hit the checkin button if you want to share it with Facebook or Twitter. Now after the checkin is done, you can simply click the Facebook or Twitter buttons below the checkin after to post to either. 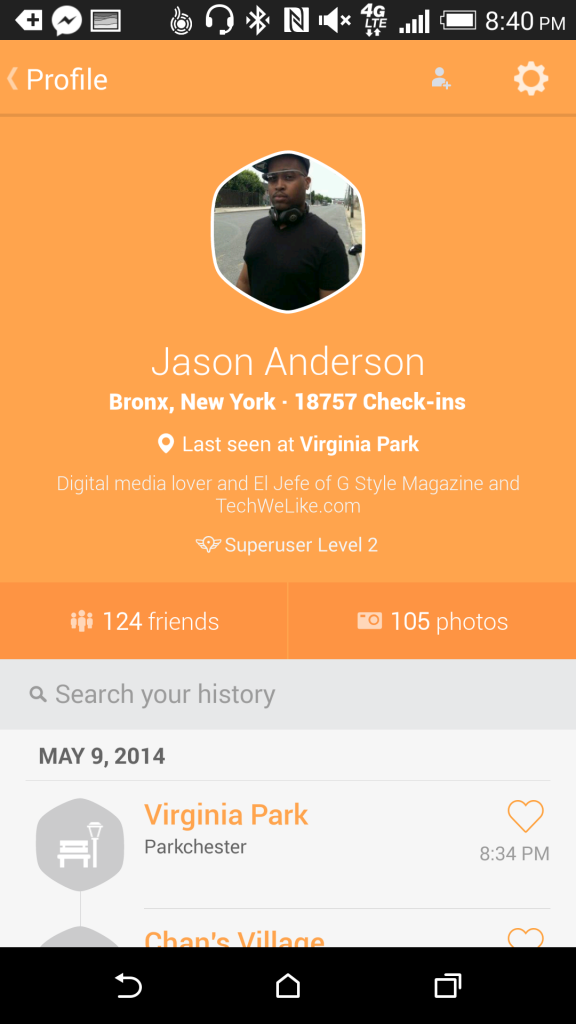 Using Swarm while different from Foursquare is just about the same, and perhaps just a little bit easier or quicker. With Swarm it is just about finding and meeting your friends nearby. But even though Swarm has separated itself from Foursquare, they are still very much linked together. Throughout the app you’ll see reference or links into Foursquare. Is a friend in a venue you don’t know about, when you click on the venue you’ll see the option to View in Foursquare. This will launch the Foursquare app (assuming you have it installed) and let you get that information from there. You see going forward, Foursquare Prime as I like to call it will be where you go to get information about places to eat, go, and check out. While Swarm will be about places you check in and find other friends to meet up with. So as time goes on and the next update for Foursquare happens, you’ll see Foursquare Prime be used more for recommendations instead. For some people this is what they want when they use Foursquare and maybe they don’t care about checking in. The two apps will live separately but will still be connected for cross over needs.

Swarm is definitely an app I’ll be using going forward as my main one of the two. I still love Foursquare, but for my day to day Swarm will be able to handle most of my needs. The only thing that hold Swarm back at the moment is you need more people. Now that Swarm has been released for iOS and Android, this shouldn’t really be a issue. It was kind of quiet during my review period, but again that is the price of checking it out before it is widely available. Now that it is, I can’t wait to see the full potential of this app. You can check out Swarm over at www.swarmapp.com and in the iTunes app store or Google Play store.