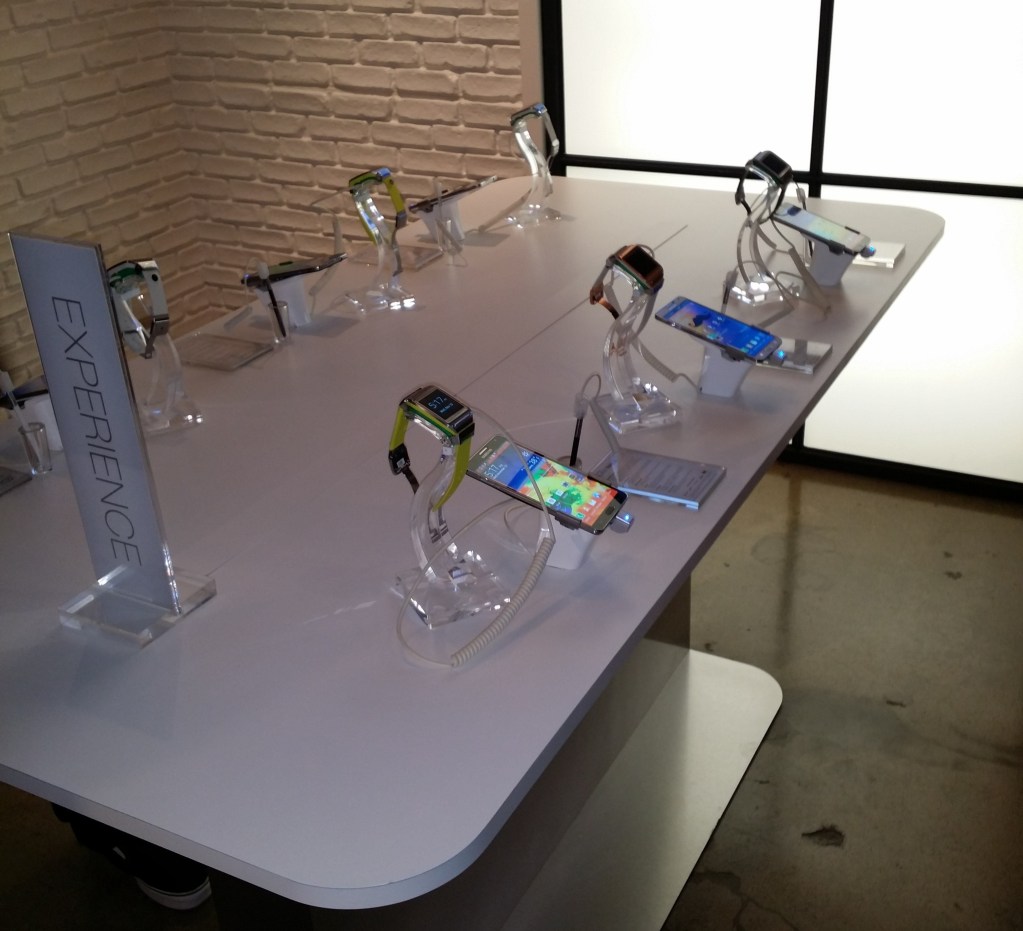 Samsung taking a cue from their Best Buy Experience stores they launched back in the late Spring have developed a entire store or should I say Samsung Galaxy Studio devoted to strictly Samsung products. Checking out the Galaxy Studio there are designated areas to check out the latest from Samsung such as the Samsung Galaxy Note 3, Galaxy Note 10.1 2014 Edition, Galaxy S4, Galaxy Tab 3, and their smartwatch which is the Samsung Galaxy Gear. Each area you go to has agents that are assigned that you will answer any questions you have.

There are tons of things holiday shoppers can get into while at the Samsung Galaxy Studio. You can create various holiday gifts such as a T-Shirt, Mug, and other items using the Note 10.1-2014 Edition’s app called PenUp. Walk over to the Photo section and try various settings on the Galaxy Note 3 to take pictures and even use the Galaxy Gear to snap some Spy shots on one of Samsung’s beautiful HDTVs.

Food and refreshments from New York standbys, Sprinkles Cupcakes® and illy® coffee will be offered. Consumers can place their order by using S Beam™ on the Galaxy Note 3 to tap and share the image of their treat of choice instantly with the waiter, or they can use the Galaxy Note 10.1 – 2014 Edition’s drag and drop feature to select and choose their favorite coffee.

If you head over to the Entertainment Lounge, you have the opportunity to unbox a Samsung device and get some personal hands-on with it. Take a seat and relax on the comfy seating and use devices to change programming on Samsung’s large displays. Any further questions for services and devices can be asked at the Galaxy Concierge.

Starting Nov. 15, game lovers can play Samsung’s holiday Notecracker Game with their closest friends and spin to win prizes including a Galaxy Note 3 and Galaxy Gear.

Its a great setup if you want to get some time with a Samsung Galaxy device and actually get some useful information before purchasing. There arent any actual products being sold here but they will direct you to the closest location with the gadgets you need.

The Samsung Galaxy Studio is open in Lower Manhattan’s Soho until December 31. If you dont happen to be in NYC there are some other spots you can check out.