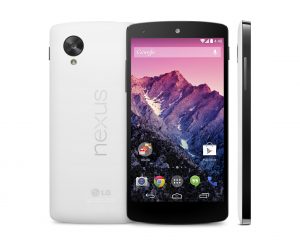 Last week was the reveal of the Nexus 5 and T-Mobile touted that they would have it ready for the holiday season soon with updates to follow. T-Mobile has announced that they will be selling the Nexus 5 on their Simple Choice Plan with upfront cost of $41 down and 24 monthly payments of $17. With this pricing would total $449.99 which is a $100 difference from getting it at the Google Play Store(if you can get one).

The Nexus 5 is high in demand and has been gettting some decent reviews thus far for its build, and Kit Kit aka Android 4.4 features. We even have some first hand impressions about how we feel about it thus far. The Nexus 5 will be available on T-Mobile’s website on November 14th and November 20th in retail stores. Once again if you want more information on T-Mobile’s Nexus 5 you can sign up HERE.

Will you be looking to get the Nexus 5 from T-Mobile or try your luck with Google’s Sold Out Store?