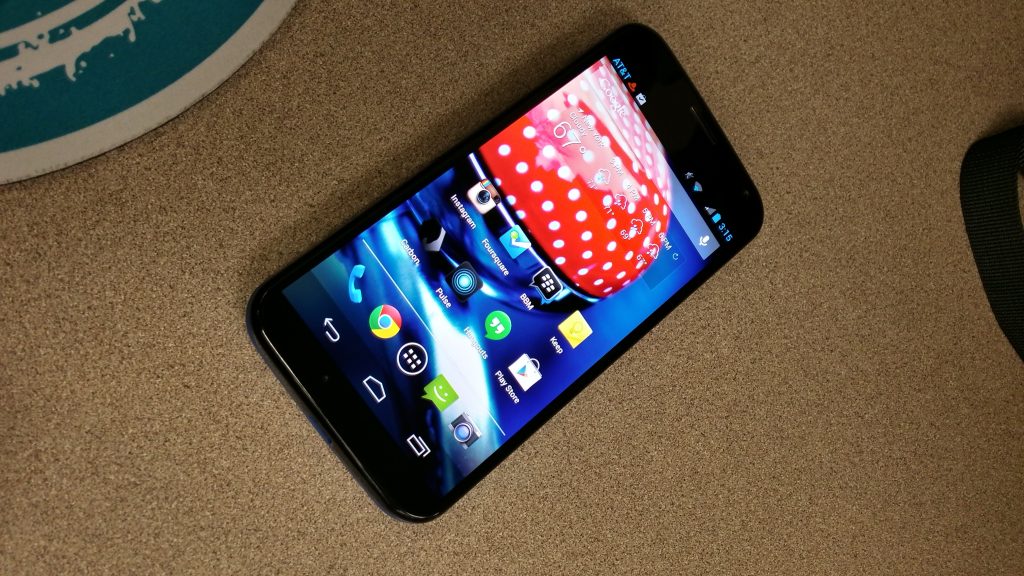 If you recall I went through the exclusive AT&T MotoMaker picking my colors, memory size, and even what I wanted the boot up screen to say such as “I Own You” just for giggles. The process went smoothly and actually received the device quicker than expected. One worry I had was whether it would come out to be the same color as on the website. I’ve seen some cases where colors may have been slightly off or a different shade all together. But low and behold when I opened up the box it was exactly as advertised.

The Moto X is a fascinating smartphone cooked up by Google and built by Motorola based on its specs and how they all work together with the phone itself. The Moto X sports a Dual Core Qualcomm Snapdragon S4 Pro chip also known as the Motorola X8 chip. There are reasons of it being called X8, as its 8 processing cores that do different functions. 4 are for graphics, 2 for applications and 2 for low power. Running alongside the processor is 2GB RAM. They work so well together I wish other smartphones would implement this. 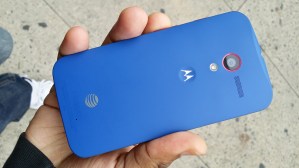 The back of the Moto X I created is of a rubberized plastic. There are other options such as ceramic and we’re still been waiting on that wood option. The material I chose looks smooth and provides a nice grip without being slippery being also that the phone is curved rather than flat. I never felt like it would slip out my hand compared to some other devices. Flip it to the front side and your will see a 4.7” AMOLED HD 720P display which it still looks good to the naked eye and the resolution helps saves the life of the battery rather then it rocking a 1080P screen. Once again I chose a black front instead of a white front as I thought it would look better with the screen off providing a solid black look.

It’s not running the latest software of Android 4.4 Kitkat but instead is using Jelly Bean 4.2. It has mixed with Project Butter to give such sleek transitions from screen to screen. Pressing the menu button I’m able to hop from app to app without any delay and go back at my leisure with them still running. Also this being a Google/Motorola collaboration this could be considered a practically pure Vanilla Android (stock) experience. No Touchwiz, Sense, or even Moto’s horrid Motoblur of the past. Stock Android is good for the hardcore Android user that wants to customize their phones to the fullest without any bloat ware or UI defects. Last time I used a pure android device was the HTC G2 of yesteryear.

Touchless Controls is a feature heavily shown off as you basically talking to your phone without touching it. Just say “Ok, Google” and your phone will do your bidding well almost. First setup through the Moto X takes you through the process including having it adapt to your voice. Once that’s done, how well it works is based on you. If you want full functionality you will leave everything enabled, otherwise passcodes will lessen the experience a bit. It’s cool to talk to your phone to tell it to play music, get directions, or tell you the weather without even looking at it. It’s not a feature I’d use heavily but others will swear by it. 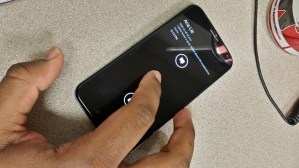 If you leave your phone face up, notifications will span in and out of the screen. It could be an email, text, or your next move in Words with Friends. Once it comes up you can press it and it will give you the first few words depending and who it’s from. Now you can go back to what you’re doing or slide down to unlock it.

AT&T’s 4G LTE coverage on the Moto X has been great. Getting crazy download and upload speeds and crystal clear calls on the Moto X.

First experiences with the Moto X camera were pretty disappointing out the box. Motorola quickly fixed this with OTA updates to all carriers to combat this. Once the update was added software greatly improved the 10MP Clear Pixel shooter. Actually as of this writing another update was added to once again make the camera better. I haven’t seen a company make strives to try and fix a problem this fast. Shooting with the Moto X is very simple. All you do is Tap & Shoot. They have taken out features consumers might not ever use like ISO and Marco features and left you with the basics like Flash, HDR and Slo Mo for video. A feature that needs its own little section is Quick Capture.

Quick Capture has you do a twist of the wrist three times and the camera comes right on. This works no matter if the display is off; you’re on the home screen or even playing a game. I have tried it in numerous apps without fail. I know it sounds gimmicky but hear me out though. Aren’t their times when you quickly want to snap a picture but have to take time to turn on your phone or come out a app and then look for the camera icon? I have shown it off to a few people and explained it to them and make you think twice. The Moto X camera is decent for picture taking but I wasn’t wowed by anything using it. It is pretty simple and should work for the average picture taker. Enabling Video Mode has you recording in 1080p and the only other feature for shooting video is in slow motion which you can see below. It’s pretty barebones compared to other features you may of grown accustomed to.

Is it the X Factor?

If you listen to the specs of the Moto X as I originally did you will feel let down? But when you actually start using it you will be definitely impressed. Once again I see it dedicated to the hardcore Android user or the type that wants to build their phone from the ground up. Feature Creatures should steer clear from this device. If you’re able to customize your Moto X it makes it an even more pleasant experience. The Moto X just goes to show you that high end specs don’t always meet the best.

If you want to create your own Moto X check out MotoMaker exclusive to AT&T click HERE
Otherwise the Moto X is available on the other three major carriers such as Verizon, Sprint & T-Mobile in limited colors.