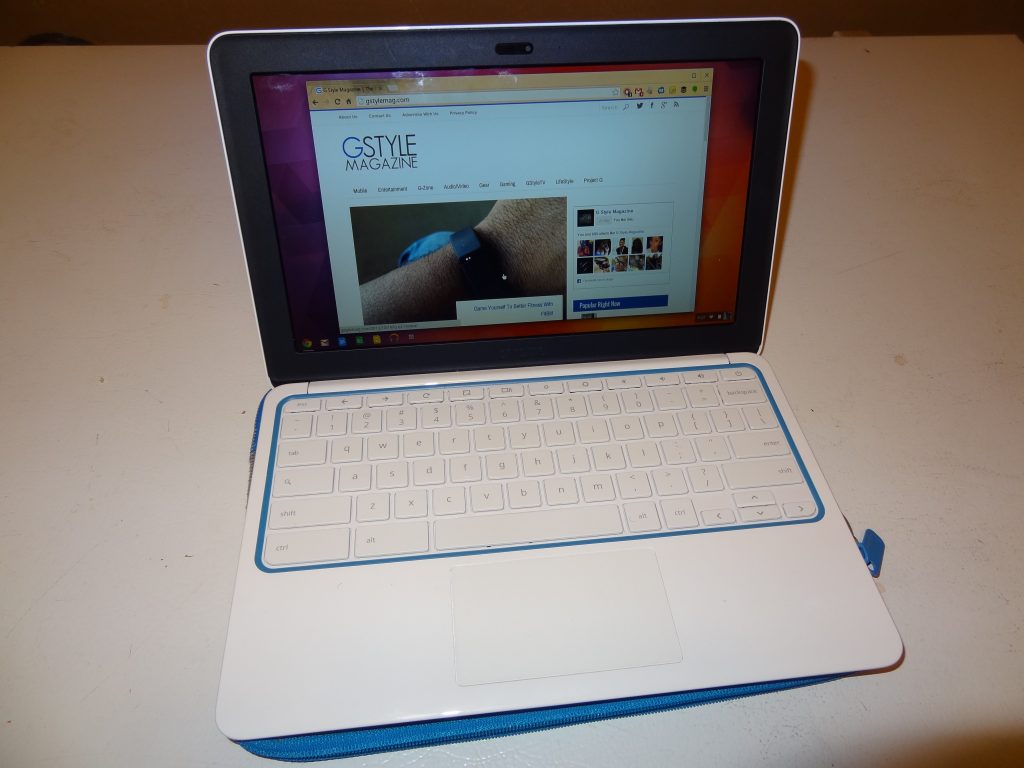 Whether you believe it or not, Chromebooks have been selling pretty well even if you haven’t heard of them much. Last year’s model the XE303C12 aka Samsung Chromebook has been living high on top of Amazon’s Notebook charts at #1 for quite a while. Now what remains to be seen is that people are embracing Chrome OS or it’s just the cheap price which is at $250? At a price like that you can’t beat it right?
This year Google has worked with HP on two devices which are the Chromebook 14 and 11. They are looking to take the success they had with Samsung and cash in again. Bringing you a cheap laptop with an easy going Chrome OS at a relatively low price of $279. Yes it is $30 more than Samsung’s from last year. Now is it worth the price?

When you look at the HP Chromebook 11 it’s pleasing to the eyes with its smooth magnesium frame and the fact it’s pretty light weight coming in at 0.69 inches thin and 2.3 lbs. It’s seamless all around as there are no screws to be seen anywhere on the device. It comes in two colors in either black or white. If you get it in white you have an option of getting it with a color trim of Google’s colors. As you see the model I’m reviewing is blue and it shows around the keyboard and on the bottom of the device.

If you’re looking for speakers or grills on here there isn’t any. The speakers are built underneath the keyboard to provide sound. It gets fairly loud and isn’t bad that’s its coming under the keys. At times it seems a bit weird when you’re jamming out to something and you’re typing all over the sound at times though. Going back to the keyboard, it’s usually what’s found on their Chromebooks as far as it being clicky. I have typed numerous things on it and haven’t missed a keystroke. The touchpad could have gotten some of the great loving the rest of the device got though. It just feels flat and not responsive at times. 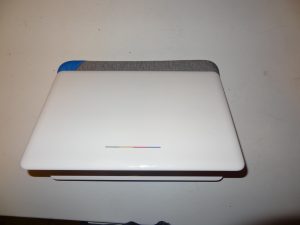 A cool feature about the HP Chromebook 11 is that it can be charged via MicroUSB. You can use the one that comes with it which provides a great charge or use one of your usual Android chargers which will work but just take longer. Next to the charging port is two USB slots and an audio jack for listening. I was rather disappointed to not see a HDMI slot or even a SD card slot. Especially see that they are on the Samsung Chromebook that came out last year. I felt they could have put these on the other side. Also because of being it so slim there isn’t any fans which is supposed to provide a quiet experience while you use the Chromebook 11. I have used it for extensive periods and hasn’t really produced any noise and a lot of heat. 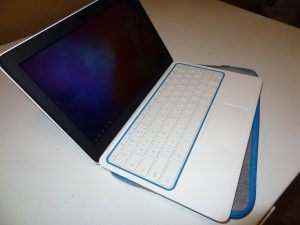 One thing that shines on the Chromebook 11 is its 11.6-inch IPS display. The viewing quality on this device especially at this price is superb. It produces great colors and is pretty good for watching flicks on it. I have watched a movie and here and there and spent a good amount of time on Youtube watching 1080P clips. Good viewing angles whether you tilt the screen upwards or move the Chromebook slightly to the left or right. Above the display is a VGA camera. I haven’t used a VGA camera in so long I’m surprised they still exist. Quality is ok but rather have seen a megapixel or two instead.

Under the hood The Chromebook 11 is rocking a Dual Core Exynos 5 Dual (5250) Application Processor, 2GB DDR3 RAM and 16GB Solid State Drive built in. It basically a mirror of specs of the Samsung Chromebook that came out last year. With these specs you won’t be breaking any benchmark records or doing any high end stuff on it, but that’s not realistically what it’s for. Its moreso for going online, browsing the web and using Google Docs applications.

Now I have used it a good amount and experienced some good things and bad things. On some sites it’s speedy as can be, other sites it would come to a haul and just freeze up. Sometimes I think the processor can’t handle what’s being put in front of it. But I have gone back to the same sites and seen it moving along nicely. Also I’ve had various tabs open at one time. I’m a multitasker and it’s just what I love to do. I did spend two hours straight watching a LIVE streaming video and it didn’t hiccup not once.

Using it for other things such as uploading files to Google Drive or using Google Docs, works great. The article I did on the LG G2 was typed mostly on this Google Chromebook. Saving it via the cloud and hopping from one device to the other was very easy and needed.

As far as battery life is concerned the Chromebook 11 states it gets up to 6 Hrs of use, but I have mostly gotten around 4 or even 5 hours of life. Most likely can contribute to the intense use you are putting on the device as well. I’d like to see it get more hours, even close to what the Acer C720 is boasting with 8.5 hours.

If you decide to purchase a HP Chromebook 11 it does come with 100GB Google Drive storage free for two years, 60 Days of Google Play Music All Access as a trial which is a good service. I stopped using Spotify for it when it was first released, and also 12 free sessions of GoGo. So if you’re a frequent flyer you got some free internet to play with.

Should you pick up a HP Chromebook 11?

The HP Chromebook 11 is basically letting you use the Chrome OS (browser) at all times and always relives on the internet as its cloud based. I mean you can always do offline docs as well.  If you see yourself just browsing the web a lot and doing documents then it’s a perfect fit for you at this price. If you are looking to do a bit more and want to obtain the use of other apps then what’s tied in the Chrome Web Store then look elsewhere.

The HP Chromebook 11 is available now for $279.99 HERE and various other electronic retailers.