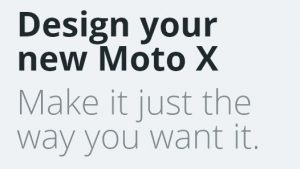 Customization and individuality is something consumers thrive for with their smartphones believe it or not. Whether it’s a host of cases or doing other alterations to your device, you never want it to look like the person next to you. Motorola and Google looked to give some of this modification back to the consumers before even getting the device. Now when we 1st heard about the Moto X we thought it would be some hardcore changes you can make such as displays, memory and other stuff but I can guess its one step at a time.

Now while the Moto X is shown to be customizable and “Made for You”, as the advertisements are plastered all over the place, its right an exclusive only to AT&T. While all four major carriers do have access to sell Moto X devices only “Ma Bell” has access to changing everything from the front screen down to the side buttons.

When going to the MotoMaker site you have the option of getting the Moto X via contract or full priced. Once you do so there are eighteen back colors (no wood yet), black & white for the front screen, and seven accents aka the buttons and the ring around the camera of the phone. 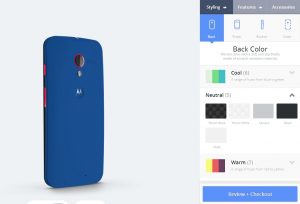 After you’re done creating the best looking phone ever there more you can do. You can select features such as what you want it to say when starting up, wallpaper and linking your Google account to it. The last part I was iffy about, since at first I thought it wanted your user name and password (in which it doesn’t). But in fact you just power on the device and it asks you to login. 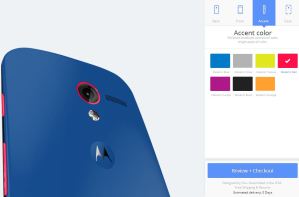 Altogether the experience has been pretty smooth and ordering the Moto X also provides you with a free Moto Skip accessory to go alongside it. Now the wait begins to see how my Moto X turns out in the flesh as I have read and seen a couple of color differences. Keep an eye out as I will show you the results and my feeling about the Moto phone that could.