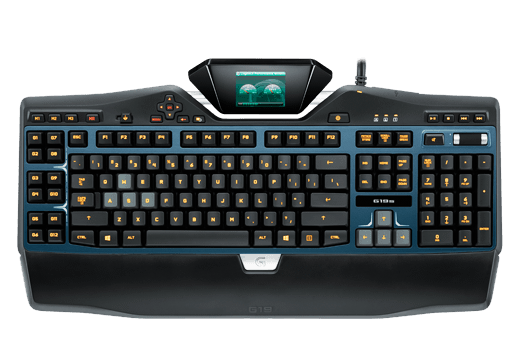 When most people start PC gaming, they start off with what they have. That means they start out with what’s usually a crappy keyboard that the system they bought came with or whatever crappy keyboard got handed down to them. As they become more experienced with PC gaming, they’ll find that the regular, run of the mill consumer keyboard just isn’t going to cut it anymore, especially if they want to remain competitive or have the upper hand in whatever game they might be playing. With that said, many turn towards dedicated gaming keyboards that include loads of extra features, programmability, and speed and accuracy. It also doesn’t hurt that most of these gaming keyboards also look cool as heck with their futuristic designs and backlit keys.

That brings me to Logitech’s latest and greatest gaming keyboard, the new G19s. The G19s is an evolution of Logitech’s past keyboards and features a new, GamePanel LCD screen for vital information, customizable backlighting, and 12 programmable G-keys.

The Logitech G19s is only slightly larger than a regular sized keyboard. The extra width on the side comes from the extra 12 programmable keys while up top, the extra height is from a row of media keys, settings keys, and a large LCD display unit. Most of the keyboard is matte black except for the faceplate around the keys that is in a metallic dark blue color that “glitters” in the light. The keys themselves are also matte black with silver symbols except for a few select keys that are silver with clear symbols. However, when the backlighting is on, all the letters, numbers, and symbols can be any color you want them to be and can be programmed to 1 of 3 M-keys via the Logitech Gaming Software.

The main feature of the G19s though is the color LCD display located up top. It is not a stationary display that its directly attached to the keyboard. Instead, it is mounted to this silver bar and allowed to tilt freely to adjust the viewing angle. The LCD display used is bright and has a fairly decent resolution to it especially when looked at at a decent viewing distance. Even up close, you only see tiny amounts of jaggies. The display unit is covered by clear plastic which helps protect the screen from damage.

There are a few neat bonus features thrown into the G19s for good measure. For starters, underneath the keyboard there are channels to help with wire management which means you can run the wires from your mouse for a cleaner, more organized look. The second cool feature is the inclusion of 2 powered hi-speed USB ports on the top of the G19s. This means you’ll be able to plug in USB devices and drives much easier than having to plug them into your computer. Lastly, the G19S has built in media and volume controls. You can easily adjust the volume of your PC via a scroll wheel located on the right side or you can quickly mute everything with a touch of a button. Above that are the media control keys so you can easily go through your favorite music.

Because there is actually quite a bit going on with the G19s, you will need a power source to bring it to life. The G19s requires that you plug it in to a power outlet as a regular USB connection will not power it. This isn’t a big deal, but keep that in mind when purchasing to make sure you have an extra outlet available.

One small issue I had with the G19s is that it took me a good solid couple of nights to get used to this keyboard. The extra G-keys on the right side of the keyboard really throw you off if you are using the keyboard for work instead of gaming. I’m used to having certain keys at the edge of my keyboard and having these new keys on the side had be accidentally tapping them all the time. I’m used to the positioning of the keys now that I’ve had the G19s for a couple of weeks and now have no problems using it correctly.

With gaming keyboards, the hardware is usually just half the equation. The other half comes from the software needed to bring out the full potential of the keyboard. With the G19s, Logitech requires that you install their latest version of the Logitech Gaming Software, even before plugging in the keyboard. The Logitech Gaming Software is actually very good and is able to detect any of the Logitech devices that work with it. In this case, once it’s installed, it was able to detect the G19s keyboard. 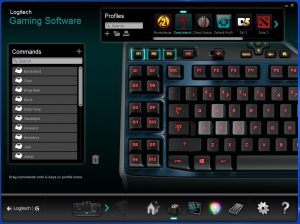 With the software, you are able to assign macros to the G-Keys, import and export custom profiles, assign actions and apps for the LCD screen, and assigning custom colors to the keyboard backlighting. Most gamers will probably spend their time messing around with the profiles and assigning custom macros for your favorite games. What’s neat is that you can also assign different colors for each profile so you can tell at a glance which one you chose just by looking at the colors.

Obviously, you would buy the G19s because you’re a serious gamer that needs something that is more flexible than your average OEM keyboard and something that offers programmability. This keyboard is plenty customizable with the 12 G-keys and 3 M-keys but I think a major part of the appeal is the customizable LCD panel. For starters, the LCD can display pre-installed applets that can show anything from a simple LCD clock to something more informational like the performance monitor that can show how much load each of your CPU’s are taking and the amount of RAM you are using. That’s probably my favorite applet. There are also other novelty applets being able to use it as a webcam viewer, YouTube video viewer, and an RSS reader. I find those a bit less useful so luckily, you can disable which ever applets you don’t want showing up in the applets menu in order to streamline it. The two I use the most is the Performance Monitor and the G-Series Profile Selector applets. The Profile Selector applet will most likely be one that serious gamers use the most. This allows you to quickly access all predefined profiles you have saved for your favorite games.

As much as I want to say that the software and programmability of G19s and all the features it has is what led me to getting it, this isn’t entirely true. Yes it’s nice that the software allows be to do a ton of stuff like program macros and view stats about my game on the LCD screen, but in the end, I just really love how awesome the Logitech G19S looks. Logitech didn’t get too crazy when designing the G19S and instead made a keyboard that looks sleek, stealthy, and futuristic, and offers everything you would want in a full featured gaming keyboard. Everything on the keyboard has a purpose and I like that. There isn’t anything on the keyboard that doesn’t have some useful purpose  and that’s what makes this and really great gaming keyboard.

Now, there is only one suggestion I would make to Logitech concerning the G19S keyboard, and that would be to offer up the face of the keyboard in other metallic colors. Gaming rigs these days can be really flashy and colorful so it would be really cool if the face on the G19S would come in other colors to match them. As id, the keyboard looks awesome with my all black setup, but for others, having more color choices would be neat. Other than that, Logitech has a winner here with the G19S and it’s definitely a keyboard I highly suggest. You can pick one up here.