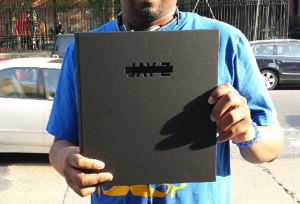 The details of Jay-Z’s forthcoming album gets more interesting as the days go by. First we had the rumors of the partnership of him and Samsung. Then we come to find out that he would be giving 1 million copies of “Magna Carta Holy Grail” via a app exclusive only to Samsung Galaxy Holders such as the Samsung Galaxy S3,S4 and the Note II.

So today I was fumbling around on twitter and Instagram bored out my mind and I happen to see something about a scavenger hunt for something pertaining to the album by Jay-Z’ publicist Jana Fleishman by giving out hinting to her location. The more it went on you could figure it was something in Brooklyn. So I took off from my Queens locale and headed out there. The closer I got I saw pictures of booklets but no idea what they contained.

The booklets ended up being the tracklisting for the album which is officially set to release on July 4th via the app while the rest of the world has to wait till July 7th. It was interesting to do something like this for Jay-Z’s hardcore fans and be the first to see the song titles of the album.

Personally I been a big fan since Reasonable Doubt so it was a fun opportunity to grasp and share with my fellow social heads. 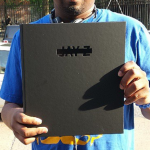