It’s a known fact that the more popular the device, the more accessories people are willing to make for it. This is just the way things work as manufacturers only want to make accessories for devices they know will sell. That means you can usually tell which devices accessory manufacturers are banking on to popular. One such device is the Samsung Galaxy S4. While Apple devices are still the most popular for accessory makers, I’ve seen a huge influx of Galaxy S4 cases lately which comes as no surprise seeing as the Galaxy S4 seems to be the most popular Android based phone out there. Cygnett, which I’ve worked with a lot in the past, sent me over a few of their latest Galaxy S4 case designs. Some of the lines you’ll be familiar with as they’ve been released before for the iPhone while some are new and made specifically for the Galaxy S4. 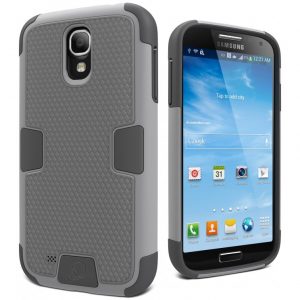 One of the more popular cases from Cygnett has always been their WorkMate line of tough cases. I’ve looked a few over the years, mainly for my different iPhones and I’ve always been pretty impressed with the quality and toughness of them as well as the overall more stylish designs compared to others. Well, for the Samsung Galaxy S4, Cygnett made some minor improvements to the WorkMate case and made it even better than before. The new WorkMate Evolution really is an evolution that builds upon the toughness of past designs but now features more style.

The new WorkMate Evolution now feature tri-material build with PC/TPU/Silicone combination. Like the previous WorkMates, it is comprised of 2 separate parts. There is an inner silicone layer and an outer PC shell that snaps on.

The inner silicone layer is now made of TPU and is more durable in my opinion from the old ones and no longer has that silicone feel to it. Meaning it no longer has that weird “slimy” feel that attracts a ton of dust and lint. The new TPU is more matte and has a more plastic feel. I like this way better as it is no longer a lint magnet and feels much more secure when on the Galaxy S4. It doesn’t feel flimsy like silicon does either. It wraps around the Galaxy S4 firmly and only has cutouts for the the audio jack, mic, IR blaster, camera, speaker, and USB port. Everything else is covered up including the sleep/wake button and the volume controls.

That’s just half the case. The other half is the polycarbonate shell that snaps on over the TPU layer. This is a tough outer layer that will withstand drops and bumps and makes the overall case more rigid. On the rear of the outer shell is a textured silicon layer for shock absorbancy as well as adding some much needed grip to the back side. The silicone here I should note doesn’t have that soft, slimy feel to it and doesn’t seem like it will attract lint. It is more rubbery in feel and texture.

Overall, I really like the new WorkMate Evolution. It’s a terrific update to the old design and if you’re someone who works in a rough environment and need a solid, tough case that can withstand the conditions of your workplace, than this could be the perfect case for you. Sure it’s not quite as thin as a regular case and it will definitely add some bulk to your Galaxy S4, but that is a small price to pay for a case that will standup to tough conditions. The WorkMate Evolution is available in Grey, Orange, and Bright Blue and also includes a screen protector. 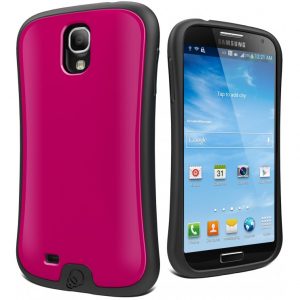 Next up from Cygnett is their new FitGrip line of cases for the Samsung Galaxy S4. This is a bit similar to the WorkMate Evolution but a bit different in execution, but still provides a good balance between protection and style.

For starters, unlike the WorkMate Evolution, the FitGrip is a 1-piece case that featuring dual materials. Not only that, it takes a slightly different approach to shock absorbancy at the corners by offering up a unique shape that makes the corners much thicker. The FitGrip has a bit of an hourglass shape to it where the body tapers in while the edges thicken outwards. Cygnett says this helps with grip and I’d have to agree with that. The hourglass shape makes the Galaxy S4 way easier to hold in both in landscape and portrait mode.

The majority of the case is made from impact resistant TPU that is form fitting and rigid. It has a plastic like feel to it but makes it more durable and less flimsy feeling than regular silicone. On the rear of the FitGrip is a protective hard shell that I believe is made of polycarbonate. It adds a bit of style to the case by allowing Cygnett to add a glossy layer of paint and color, brightening up what could have been a very dull looking case. The FitGrip has cutouts for the the audio jack, mic, IR blaster, camera, speaker, and USB port. Everything else is covered up including the sleep/wake button and the volume controls.

Now back to the shape of the FitGrip, I want to emphasize how great it feels in your hands when you are using it as it makes the Galaxy S4 much more comfortable to use over long periods of time. For me, I love to game on my devices and with the FitGrip, it makes the Galaxy S4 feel more comfortable, like a gaming controller thanks to it its thicker corners and rounded edges. It just feels better in your palms for some reason and makes gaming more enjoyable in my opinion.

Overall, despite the FitGrip adding a bit of bulk and making the overall shape of the Galaxy S4 larger than it already is, it really does have its benefits. The shape makes it easier to hold while also making it more comfortable. If you spend hours at a time gaming, texting, or social networking, you’ll want to get this case just for the sheer comfort it provides. The FitGrip is available in Black, Pink, White, and Lime and also includes a screen protector as a bonus.