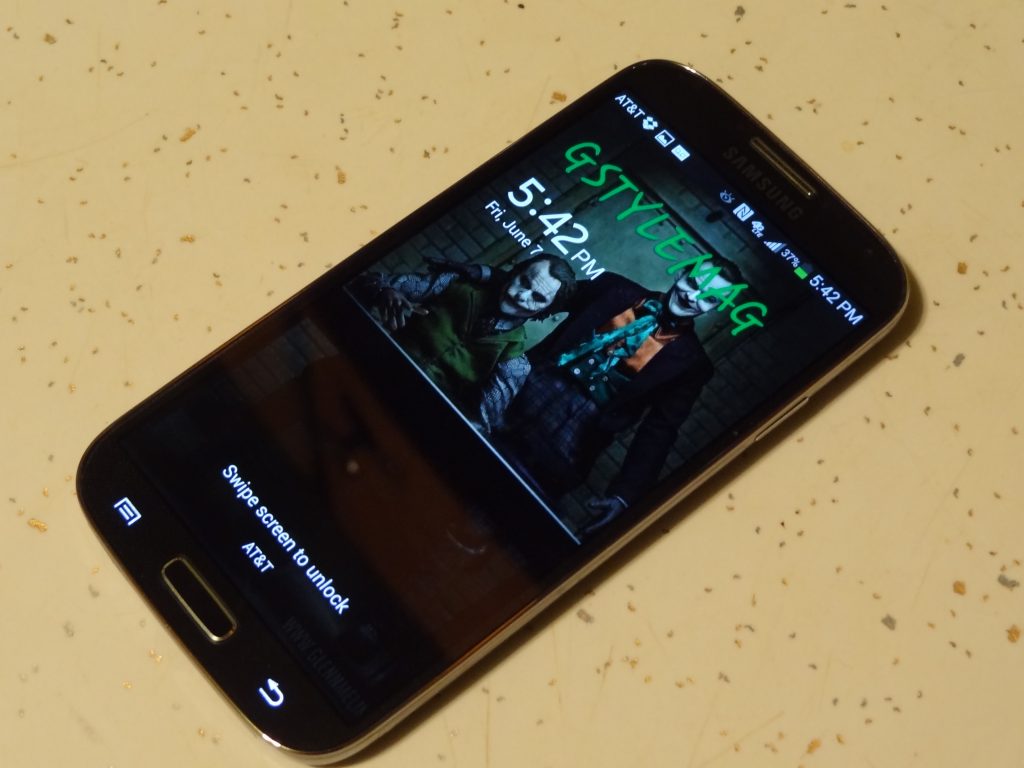 When the Samsung Galaxy S4 was announced back at New York City’s Rockefeller Center back in March, it seemed to receive a mixed reaction. Consumers were in awe of the feature filled device while the media (including myself) were left with a feeling of “that’s it?” after the event. All these features made you wonder if they would even be utilized and also the biggest complaint was the design. It is still carrying a similar look to its predecessor the sales killing Samsung Galaxy SIII and that was one major concern people couldn’t get over.

In the end it looks like rather than do a total hardware overhaul such as the impressive looking HTC One, Samsung played it safe. In the end can you blame them with their Galaxy S series line alone eclipsing past 100 Million sold and showing no signs of slowing down anytime soon. With the Samsung Galaxy S III the “must-have” phone of 2012 and the surprising runaway hit of the phablet Samsung Galaxy Note II, is there any reason to go ahead and pick up Samsung’s newest piece of hardware?

Looks May Be Deceiving 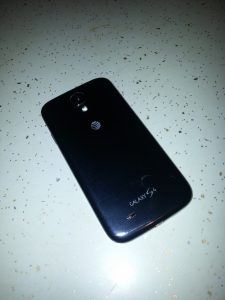 Samsung’s approach of “If it’s not broke, why fix it” can evidently be seen with the design of the S4. It still uses the same polycarbonate plastic look like the S3 even though everyone prayed for a change. You might it hate but after a while you will learn to adapt to it.

Some advantages are you can easily pop off the back off and still have access to your battery, microSD, and sim card slots. I’m still a fan of replaceable batteries, nothing beats throwing in a new charged one instead of lugging around battery chargers/case and such. Also managing to make the S4 lighter than the S3 is a pleasant surprise. It feels light as a feather in the hand.

Not everyone wants to run around looking for a USB power cable source and sit there waiting for your device to change back up. Like a case with my friend’s iPhone, he had a USB charger but nowhere to plug it, my device was dying and I just swapped the battery and I was back in business in minutes.

First thing you will notice is the crisp colorful display of the S4. On the S3 you had 4.8” with 306ppi, but on the S4 it’s been stretched out to 5” utilizing a 1080p HD Super AMOLED display of 441ppi. This makes it one of the most gorgeous looking displays on the market only being compared to the sexy HTC One.

Under the hood you have a 1.9 Ghz Qualcomm Snapdragon S4 processor (while sadly internationally they are getting Octo-Core), with 2GB of RAM and 16GB of internal storage memory. You can of course pop in a microSD and beef your space up to 64GB but it doesn’t help much with the storage internally.

Of the 16GB you only get 9.6 and installing a laundry of apps could have your S4 begging for software. Luckily Samsung has heard the complaints and is actually working on freeing up a smidgen of that taken memory but also given the ability to move apps to your SD card. It’s already released in Germany but no word on the States.

S4 I can say has one of the best looking cameras on the market. There are some that praise the HTC One’s camera but I think that’s one of its shortcomings using a 4MP camera. As far as the S4 is concerned it’s packing a strong 13MP shooter on the back and 2MP front-facing. I would have to say I enjoy taking pictures and video even more again then when I was using the behemoth Note 2.

There are tons of features associated to have you taking picture of everything and uploading for days. Samsung has taken an approach from its Galaxy Camera and added a great interface to take pictures with. Auto mode may be your usual way of shooting shots but there is a world of options. Drama Shot-which can catch multiple views of something in action, Eraser-which will remove any person/object that gets in the way of that perfect photo, Animated Photo– its similar to making gifs, and Dual Camera-allowing you to use both cameras to take pictures. Add on the various filters and it’s a dream land for the social media user that loves to share their life.

Only bad thing for me is I tend to cover the LED flash with my long fingers messing shots up at times based on it being located right under the camera. The prior versions such as the S3 and Note 2 and a few other cameras would have it on the side. Another thing is the S4 doesn’t fare as great in low light areas compared to the HTC One and Nokia Lumia 920. Other than that it’s a definite winner in the camera department.

A feature I originally thought was useless but have grown to like is the Dual Camera video shooting option. Being able to shoot video in front of you and having yourself on-screen is good for various things such as documenting how to cook something or even doing an interview with someone and showing the latest product off at the same time.

Using the S4 has provided me with one of the best smartphone experience I had in a good bit. The processing power helps everything flow on this device and I haven’t seen any hiccups. It is using Android’s Jellybean 4.2 which actually works decent with Samsung’s TouchWiz. I would still prefer a Google Vanilla experience but then again that’s looking to hit shelves in a couple of weeks’ time anyway. TouchWiz makes everything easy for its user and brings it right to their fingertips.

Battery life hasn’t been too bad on the S4 getting close to a day of regular usage on it. When I used a lot of data intense stuff I can see the battery diminish a little quicker as I’m using an AT&T model. Their 4G LTE speeds have been great as I have gotten close to 25Mbps down and 13Mbps up. Navigating from app to app I could see little to no slowdown. There was an occasional freeze here and there on the phone overall but I just chalk that up to “things happen”. There is a lot of the usual bloatware associated but luckily you can “hide” these apps on the menu option. 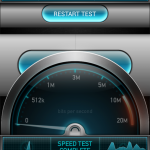 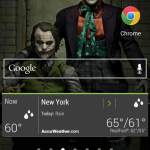 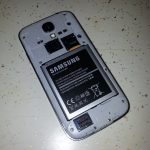 No device can hold a candle to the features on the Samsung Galaxy S4. Whether you decide to use them or think they are a little gimmicky, some may work better for others. There are features such as S-Health, Air View, Air Gestures, Multi-View, and the list continues to grow.

Watch-On/Peel
While it may seem like a novelty, being able to use your S4 as remote control is a very cool feature. Most likely your on your S4 and want to change your channel but don’t want to reach for your channel clicker. There is two apps associated with this which are have Peel and Watch-On. Once you put it through the initial setup and sync it with your set-top box and TV your good to go. Click on your favorite show and have your S4 pointed at your box and voilà! It may work better for you if you’re looking for a certain category and can’t quite get it right with your provider. There is still the old functional “buttons” too if you want to keep it old school. I did find Watch On better than Peel which Is weird as Watch-On runs Peel software. 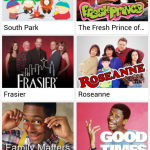 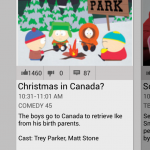 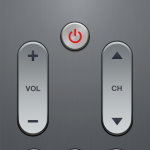 S-Health
I’m not the biggest health nut by any means but Samsung has added the luxury of helping you succeed further down that path if you are. The S4 has barometer, temperature, and humidity sensors built-in to assist with monitoring your health, and the surroundings going around you. It is interesting information and I have started to fill in the stats and check on it periodically to see how my lifestyle is.

There are three main aspects of S-Health which are Walking Mate: which counts your steps and you will tell you how many calories you burn. It’s turned into a habit of me checking this daily and even achieving the 10,000 steps goal a few times. Food Tracker allows you to punch the calories before you intake them and tells you how to burn them off and you can create lists and even take photos of the meals you eat. Last is Exercise Mate where you can enter your exercise regime and keep a good track of it. 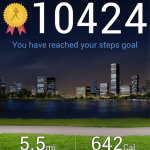 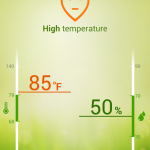 Air View
Taking a page out of the Note Series is “Air View”. With the Note Stylus you would hover it over a photo in the gallery or while watching a video and it will give you a preview. Now you’re able to do so with your finger. At times I find it useful let’s say if your hands are a mess and don’t want to dirty up your screen. Otherwise I feel like just touching the screen if my fingers are that close.

Air Gestures
It’s hit or miss with Air Gestures. Some work great such as using SMS and putting the phone to your ear, it will automatically call the person, which is cool. Quick Glance is good when you just want to see notifications in which you just wave your hand across. I found ones such as Air Jump & Air Browse to be frustrating at best and something my fingers could have done.

Get It Over The HTC ONE?

Overall using the Samsung Galaxy S4 was a better experience then I thought would be possible after my first hands on experience with it. It is a powerhouse by no means and has an enough software to get the job done in everything you could only imagine doing. The 4G LTE performance in NYC is splendid with AT&T (I have been told Sprint to stay clear) and you will love the gorgeous HD display on the S4.

In the battle of HTC ONE vs. Samsung Galaxy S4, I think it all comes down to design. Either take the safe bet design that you have grown accustomed to, or venture off into HTC land and try something different. If radical design change doesn’t mean anything then gladly pick up the S4 as its one of the Top Smartphones of 2013.