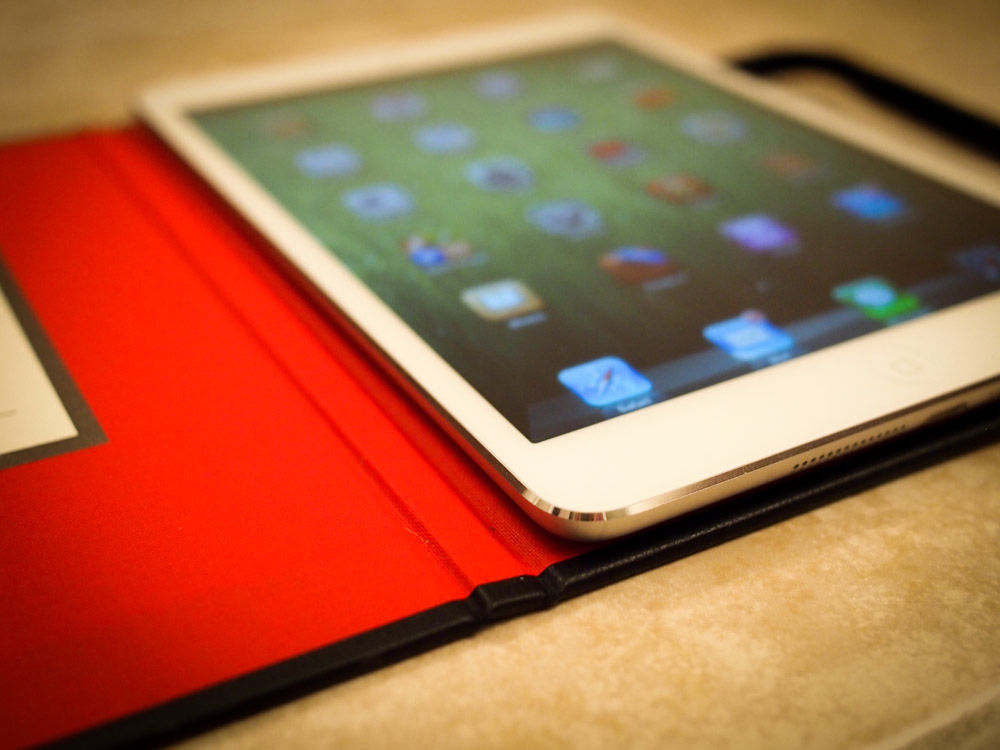 If you read my review on the DODOcase Classic for the iPad Mini, then you know that it is one of my most favorite cases I’ve used to far on the iPad Mini. It’s sleek, good looking, and does a very good job of protecting it. However, there may be some of you out there who don’t like the tiny bit of added thickness and bulk that comes with using a DODOcase. Well DODOcase has a solution for you and it’s called the DODOcase HARDcover Classic. If you’ve never heard of their Hardcover case before, it’s basically the same thing as the DODOcase Classic except that it lacks the inner bamboo tray. This allows DODOcase to make the HARDcover a bit smaller, thinner, and lighter making it much smaller than the standard DODOCase. 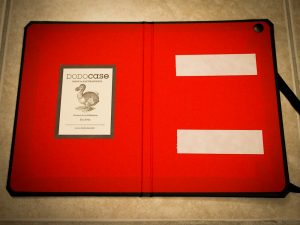 Upon first glance, the DODOcase HARDcover looks exactly like the standard DODOcase, but when you get them next to each other, you realize that the HARDcover is a bit thinner, shorter, and not as wide. Because it does not have the inner bamboo tray, it can be made smaller to only have to accommodate the size of the iPad Mini when placed in it.

Since there is no longer a tray to hold the iPad Mini in place, you instead have to use a series of super strong adhesive patches to hold it in place. These stick to the back of your iPad Mini and keeps it firmly in place on the back inside cover. You have to make sure you align it well however so that it lines up with the rear camera hole as well as the magnets located on the front cover which I’ll get to a bit later. Once on, it’ll stay there until you decide you want to remove it. You can and you’ll be happy to note that the sticky adhesive is reusable. All you have to do is clean it with water and it’ll become super sticky again. 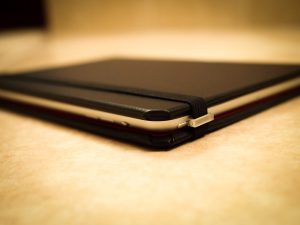 From this point, it functions pretty much like the regular DODOcase. Close the cover and the iPad will go to sleep. Open the cover and it will wake. You can use the Cover as a stand for viewing video as well as fold it all the way back to create a slight typing angle. The rear even has a camera hole so you can use your iPad to take photos. As with the regular DODOcase. there is also an elastic strap built in that keeps the DODOcase HARDcase secured when the cover is closed.

Again, the HARDcover uses the same type of materials as the regular DODOcase. Each HARDcover is made from black Moroccan cloth and constructed using traditional bookbinding techniques. It has a unique texture to it but still feels very smooth to the touch and while offering a good amount of grip. The inside of the cover is lined with some kind of colored cloth that you can get in either red, blue, or charcoal. The one I received was red and I really love how it adds a splash of color to the other wise neutral tones. They even add a really nice DODOcase sticker on the inside for authenticity. 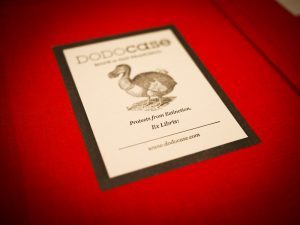 If you have an iPad Mini and want the look for a DODOcase but don’t quite want the added bulk that comes with it, your next obvious choice would be the HARDcase. It’s everything the regular DODOcase is, but in a smaller, sleeker profile. However, the one drawback comes from not having the inner bamboo tray so it doesn’t quite have as much protection as the regular DODOcase.

If however you can live without that, the DODOcase HARDcover is a really nice case that will help disguise and protect your iPad Mini. It does offer decent protection because the HARDcover is pretty rigid, just not as much as the regular DODOcase. Again, it does do pretty much everything the regular case does so either way, you should be happy with what it can provide and how it looks.

The HARDcover Classic is available at the DODOcase website here. It retails for $34.95 and is available in three different colors – red, blue, and charcoal.