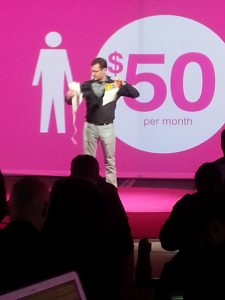 Definitely an event to remember as T-Mobile took to the stage yesterday to make a change or rather eliminate the traditional two-year contract for the US consumer and provide you with a “Simple Choice” which is one plan that unifies you with unlimited talk, text, and web and at a very affordable price.

Other announcements also included finally getting the one smartphone they have been missing, whether you’re a fan or not which is the iPhone; as well as pending releases for the HTC One and the Samsung Galaxy S4. Also their 4G LTE service will finally be unleashed to seven major cities, then start rolling out more as time progresses. Their 4G LTE looks to still work with their current HSPA+ networks.

T-Mobile Gives You A Simple Choice

Gone are the days of being tied down to a provider for two years and having to pay crazy cancellation fees no matter whether your starting or near the days of finishing your contract. The Simple Choice plans all include unlimited talk, text, and data but there could be a speed cap depending on which one you decide. It is fairly easy to comprehend though the way its laid out.

The first two plans do include hotspot tethering while the last one you would have to add-on to it for an extra fee. That’s pretty much all there is to it. If you decide to add a Family Plan it goes the same way but just adding a 2nd line starts at $30 a month. Add a 3rd and so on and its the usual $10/month deal.

So now that your plan has been chosen what about the phone? You can either “Bring your Own Phone” which you may see a lot of consumers doing, and using one of the choice plans above. Or you can select a new phone and put a down payment on it. Once you do that you will  pay for it monthly. Depending on the device and your credit (yes credit checks are still in effect), you can end up paying anywhere from $10 down to up to $20 down a month, for 24 months. By doing this the amount will just be tacked on to your monthly plan charge.

Example: You would be having a $70 for a monthly unlimited plan then adding on $20 in payments for your phone, bringing you to $90 a month. In essence that still isn’t bad compared to the pricing of other carriers which I’ve seen people paying almost $110 for just one line alone. And this is if you go for the premium deal and also the max payments. If you’re like many folks who rarely use any data the $50 plan is excellent for you, otherwise if you’re the type that has to be wired to the digital world constantly,  then the largest plan is the greatest for you.

While other carriers have touted their 4G speeds for a while, T-Mobile has slowly been working their way up the ladder. Before 4G LTE they had created their HSPA+ network which wasn’t exactly the 4G LTE speeds you’d see from Verizon but depending on your location can be still fascinating compared to others. What’s great about T-Mobile’s 4G LTE network is if you go out of that coverage area you don’t have to worry about going down to 3G speeds but you will instead go to their HSPA+ network. Depending on your usage of the network may not even notice a difference what so ever. When the other carriers speeds drop it can be pretty painful to bear. The speeds some of the devices pulled in at the event where impressive.

The Samsung Galaxy Note II on display was pulling in close 60 Mbps down at times which was great but unfortunately I couldn’t replicate on my own T-Mobile branded device. I asked why and was told they are using special simcards as 4G LTE isn’t enabled in NYC right now but looks to be summer time. The iPhone 5, Blackberry Z10, and HTC One were also pulling in decent speeds ranging from 15-30 Mbps which I know can be pulled sometimes on HSPA+. The Samsung Galaxy S4 was also on hand though no speed tests were allowed, but they were able to show off some of the features of the phone which we’ve pretty much seen already.

As of now 4G LTE has been unleashed upon Baltimore, Houston, Kansas City, Las Vegas, Phoenix, San Jose, and Washington, D.C., as the bigger cities such as New York City, Los Angeles and others will have to wait for more roll outs towards the summer. I will say with all the upgrades to the network thus far I have been getting better coverage in areas (such as my house) I wasn’t getting before.

New devices including the iPhone 5

A lot of cheers in the crowd believe it or not came from the iPhone 5 finally launching with T-Mobile on April 12th. People have been waiting years for a iPhone to come to the Magenta network ever since it was released on the other providers such as Sprint and Verizon after AT&T exclusivity ended. Being the last wireless carrier up to bat, it seemed like the day would never come. But they will be getting the iPhone 5 with support of their 4G LTE network and will be priced at $99 down and monthly pricing going forward. Feature wise it’s the same iPhone model just adding the extra bands for the updated network. Also it will include HD Voice which T-Mobile has implemented to its newest devices for a while and hopefully other carriers will release eventually. 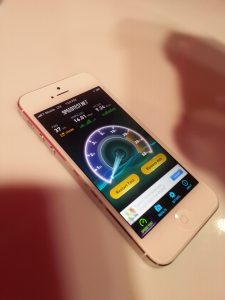 If you’re a Android devotee like me, on hand was also the Samsung Galaxy S4 and the HTC One. The Samsung Galaxy S4 was demoed off showing its interaction with the 4G LTE network which was good but we couldn’t get a speed test on it as the phone is still in its beta phase. The T-Mobile CEO did hint that it should be out on the market on May 1st. I spoke to a Samsung agent and was told “2nd Quarter” which looks to be right. The HTC One was up and running doing speed tests, watching Netflix and testing out BlinkFeed. Everything worked as it should, but there is no definite release date for the device as we are still waiting on HTC after their delay announced last week.

The Blackberry Z10 was released in stores yesterday for $99 down and coincided with the press event and is slated as T-Mobile 1st official 4G LTE phone. There weren’t any speed test apps available for it so we had to take it to their browser and run it off that. If you want to check out our various coverage of the Blackberry Z10 you can click HERE.

This has to be one of the biggest events T-Mobile has done in a while with so many changes and features being added to a company who was almost on its way out and onto a merger last year. At this point, it’s looking to put a dent in the mobile industry and other carriers may have to change their way of business… maybe. We will see how it all progresses.