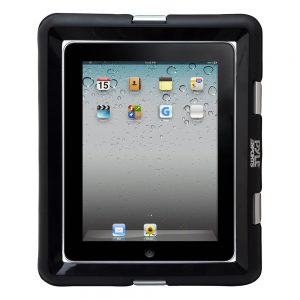 Like I’ve said before, there are certainly no shortage of cases available for any of Apple’s mobile phones and tablets. In fact, even though new models come out yearly, accessory makers still continue making cases for previous models. The iPad is no different, though it does help that the iPad itself has pretty much stayed true to its original shape and form factor which makes it easy for accessory makers to come out with cases that might fit new and previous generations of iPads. The Pyle PWSIC30 Waterproof Sport Case takes the one case fits all approach allowing it to support every model iPad that has ever been released.

First up, I’m going to just come out and say that the Pyle Waterproof Sport Case is by far, the largest case I’ve ever seen for the iPad. This is not thin or light by any stretch of the imagination. The case is large, bulky, and heavy and turns the normal iPad into a megasized super iPad. But, that’s not to say there isn’t a reason for it. 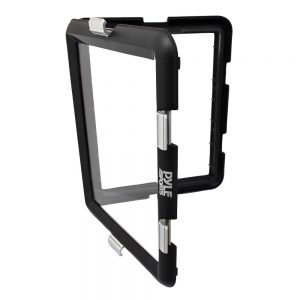 The Pyle PWSIC30 is meant to be a heavy duty, waterproof sport case that can stand up to some heavy abuse. This thing is built to protect. The frame is made from heavy duty, plastic that forms a 1-inch border around your iPad. It opens up like a book with a hinge system that extends along the entire left side of the case. All you do is place your iPad inside the case and depending on what model it is, insert the included spacers for a more secure, snug fit. Once in, close the case and use the 4 heavy duty side lock mechanisms which latch both pieces of the case together. This forms a tight seal around the waterproof membrane that lines the inside.

The membrane is made of some plastic, rubbery material which lines the entire interior of the case and has grooves built into the edges. When the case is closed, these grooves form a water tight lock that keeps water out. It’s similar to like what a ziplock bag does, but way more extreme. This membrane also allows for full touch capabilities of your iPad. That means you’ll be able to completely use your screen through this.

Last, the case includes a pass through audio jack. You plug the jack in on the inside to your iPad and on the outside of the case is another audio jack that you can plug your headphones or external speakers into. That means that the iPad is still protected from water, but allows you to use speakers still. Obviously if you have Bluetooth speakers though, you won’t need to make use of this.

The Pyle PWSIC30 Waterproof Sport Case is neat and useful, especially if you are around water a lot and need something to protect your iPad from water as well as other elements like sand or dirt. It’s great for marine use as well and will protect your device from salt water which is a major no no for electronics. Not only that, it has the added benefit of being able to float if you accidentally drop it in the water. That also means it’s great for use around the pool as well.

The case however is a tad bit large for regular, everyday use and is definitely not something I would want to keep on at all times. It’s just way to large to be practical. I’d keep this as a backup case for those occasions when I need to use something like it, but it’s not something I’d keep on all the time.