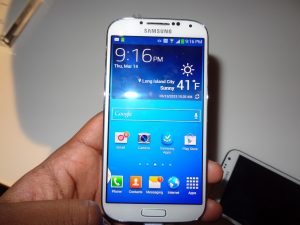 Samsung held their first Unpacked event in the U.S. and in New York City no less. The anticipation for the Samsung Galaxy S4 has been building since it was announced back at Mobile World Congress back in last February. The expectations were high and coming from Samsung a lot of people expected those to be fulfilled. It being at Radio City Music Hall you had a feeling it would have a touch of NYC to debut its successor to its best-selling smartphone Samsung Galaxy S3 which has gone on to push over 40 million units.

The themed theatre show as I wouldn’t call it a press conference by any means went on to showcase the newest member of the Galaxy family and all its newest hardware and software additions and how it could it could be your “Life Companion”. While some features were impressive as you may, the consensus of the media world aren’t particularly blown away.

First thing you will notice is the Galaxy S 4 has gone to a size of 5″ with a 1080p HD SUPER AMOLED display of 441ppi whereas the Galaxy S 3 had a size of 4.8″ and was using a 720p display with 306ppi. If you put them side by side the size different doesn’t seem too much. You will see it in the resolution though. The elegant screen of the S4 is beautiful and looks much better than the S 3. I personally have adapted to the 1080p display of the HTC Droid DNA so it’s needed for Samsung.

They also still manage to keep the same plastic design of the S3 while stating the S4 is of a stronger polycarbonate. It may not feel as slippery but it still feels like plastic. They did manage to cut some weight off the phone which is great while making it longer with the length of display and adding a 2,600mAh battery. The processing power depending on what part of the world you’re in will be a 1.9 GHz Quad-Core Processor or 1.6 GHz Octa-Core Processor.

The larger battery size and faster processor will have its work cut out with the arsenal of new features added to the Galaxy S 4. They have S Health using the built in pedometer which tracks your weight, eating habits, surroundings and temperature. Also built in is an IR Blaster which works with Peel which allows you to change channels which also has been added to the Note 8.0 and some other non-Samsung devices already. Other features seen in other devices is the sensitive screen which can detect gloves. A feature that’s cool but been done with the Nokia Lumia line months back.

The eye tracking technology rumored isn’t exactly what you thought of been with it actually using your eyes to scroll but rather an add-on to the previous feature of Smart Stay which allowed the sensor to keep the screen on while you looked at it. Smart Pause works as you’re watching a movie and say get distracted, you turn away from the screen and it pauses. You look back it and boom you haven’t missed a step. Smart Scroll works more with you reading something and tilting your S4 up or down and the page moving that say way. Looks to help you if you’re doing a bunch of one hand tasks.

Air View that was only on the Note 2 with the stylus assistance has made its way here but instead using your finger. Swapping your hand over the screen left and right will assist you going through playlists, pages, etc. I did try and use some of these features on the S4, but some provided issues, didn’t work all together but I can imagine the phone isn’t completely finished.

Samsung loves for you to share your content with other Galaxy holders and with Group Play you can continue to do so. Photos, Movies, Music you name it. In addition to the Music you can sync all the phones together (didn’t state a limit) and create a musical surround sound system. I did see it in action and you can check the show clip below.

Samsung has upped the camera quality on the back of the Galaxy S4 to 13MP where the S3 had 8MP. Also on the front is a 2MP shooter. If these don’t blow your mind, they have retooled the interface to make it look like the Samsung Galaxy Camera. Sound & Shot takes an image and lets you add 9 seconds of video to it which is rather creepy to me. Drama Shot captures multiple shots and puts them into a single frame. Sounds reminiscent of HTC Zoe on the HTC One.

Dual Shot which seemed to wow the audience allows for you to take a front photo and back photo at the same time. Realistically the front photo kind of looks like a floating head in a frame and looks awkward and looks crazier as that person is trying to focus on the main picture.

Dual Video Call can be the saving grace for your video chats you have with someone and they want to see what else is going around and you’re awkwardly either turning your phone around or your swapping the camera back and forth. Some of these Dual features looks to been announced by LG a couple weeks ago with their LG Optimus Pro G line too.

Throughout the presentation Samsung mentioned Smart this and Smart that but never once said anything about Android or Jelly Bean which will be at version 4.2.2. I mean we know it’s there but it looks like the main emphasis was showcase what the S4 can do with the software. How will it compare to the HTC One? If HTC doesn’t get their marketing right Samsung will kill them in this. But with HTC’s innovative smartphone design and even LG reworking their phones Samsung has some healthy competition in Android land.

The Samsung Galaxy S4 is set to release at the end of April on all four major carriers and there hasn’t been a price given out. Check back with us later on when we provide a full on review.