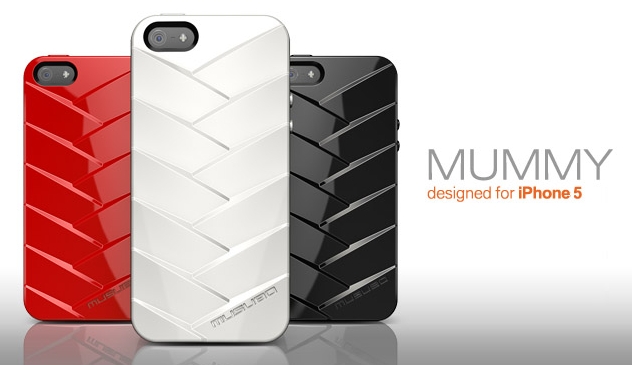 Musubo is a name that you’ve probably seen a few times here already as I’ve featured a few of their cases here already, mainly for the iPhone but they do also make cases for a select few Android phones as well. I’ve always found their cases to be very stylish and highly detailed with looks that I haven’t see replicated by others. Their designs are anything but flat and always feature a ton of 3D elements, textures, and color. The case I’m looking at here today is no different and it’s the Musubo Mummy for the iPhone 5. Unlike the Retro case I saw earlier this year which was a 2 piece design of silicone and polycarbonate, the Mummy is made from durable TPU (thermoplastic polyurethane) that is flexible and shock absorbent. 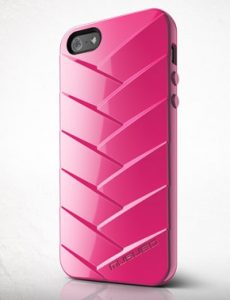 Like other Musubo cases, the Mummy is very stylized. It’s not flat like many other iPhone cases you see out there and instead features a 3D design that you can see and feel. Since this case is called the Mummy, the rear of the case features a crisscross design that mimics the bandaging of a mummy.

Because it’s made of  TPU, it is rigid, but also flexible. This means that fit and finish on the Mummy is fantastic allowing for a tight fit that stays put and doesn’t lift up at the edges like silicone cases do. Another awesome feature is that it has its own built in buttons molded into it for the volume buttons and sleep/wake button. This means that these buttons are protected too from drops and also makes it easier to press them with the case one. What isn’t covered are the usual openings for the Lightning port, speaker, mic, camera, and mute switch.

I have to mention that the Mummy case is quite a bit slimmer than most of the other Musubo cases I’ve seen in the past. It’s not bulky at all and actually really slim despite it having a 3D textured design. It’s also slightly tapered at the edges so it feels even slimmer.

I really like the Musubo Mummy case. As I stated above, the fit and finish on it is very good as I wouldn’t expect anything less from Musubo. The TPU material used here feels very good and has a slight gloss to it which makes it quite grippy to hold. That obviously is a plus as well as the 3D textures which give you fingers something to grab on to. Those who like to color coordinate their phone accessories with their clothing will be happy to note that the Mummy comes in an array of bright colors as well as the usual black and white.

There isn’t anything at all I didn’t like about the case  and I would honestly recommend this to friends who were looking for a stylish, well made case. It’s also fairly affordable considering that the $29.99 price tag includes a screen protector, a cleaning cloth, and a compact, foldable device stand.