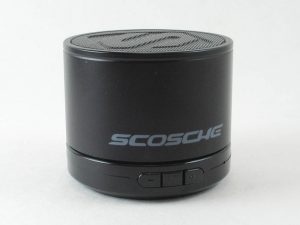 If you want big sound from your mobile device, more likely than not, those tiny speakers on your phone or tablet probably aren’t going to cut it. From my experience, they work decently if you’re in a quiet room by yourself with your device fairly close to you but in a more realistic environment where noise exists, those built in speakers just plain suck for playing music. That’s why lately, I’ve been looking for the perfect Bluetooth speaker. I saw Bluetooth and not a speaker dock because I hate those things. They are always too device specific and if you ever change devices, more likely than not, that dock becomes useless. That’s why I stick with Bluetooth devices because they can connect with virtually anything. That means a Bluetooth equipped speaker will work just as well with my iPhone or iPad as it would with an Android device or Windows Phone.

Recently I looked at the Divoom Bluetune-Solo which was a small, can shaped speaker which worked rather well for its size. Today, I’ll be looking at the Scosche BoomSTREAM Mini. This too is a can shaped Bluetooth speaker but is much smaller than the other one. It’s about an inch smaller and includes built in controls for both track selection and volume. 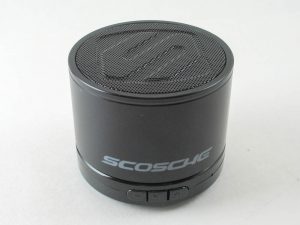 First off, the BoomSTREAM Mini is small. It is in fact the smallest Bluetooth speaker of this type that I have looked at and is just under 2-inches in height. Though it’s small, it also seems to be quite dense as it does feel a bit heavier than the larger speaker I saw previously. According to the specs, it features a 1200 mA lithium polymer rechargeable battery, a unique suspension driver speaker, Bluetooth 2.1, an aux-in port for non-Bluetooth devices, and audio controls. Based on what I see though, most of it seems to be battery and speaker.

Scosche gave the BoomSTREAM Mini a rather clean, minimalistic look to it. Most of the can seems to be metal though I’m not sure what type. You can choose from 4 different colors – black, blue, red, and silver. On the top of the unit, that is taken up by the speaker grill which pretty much occupies the entire top of the unit. Scosche did something cool here with the grill. Because the grill is also made of metal, Scosche has their logo stamped into it. It’s a pretty cool effect and I like that they used metal here as it also makes it more sturdy and durable. 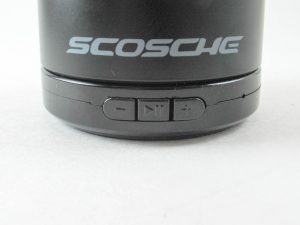 The base of the BoomSTREAM Mini however doesn’t get the metal treatment. Instead, this portion is made of plastic and houses the audio controls, aux-in port, and the mini-USB port that is used for charging. At the bottom of the base is some kind of non-slip material that they have stuck on there instead of the usual rubber feet that you see on these devices. The material is actually quite grippy which I found surprising and offers a much grippier hold that rubber. Last but not least, you’ll also find the on/off switch down here.

Overall, a very clean build with a great small size and weight to it. I’m not to keen on the plastic, but at least that is the smallest portion of the speaker as a whole. 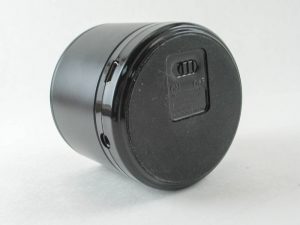 Using the BoomSTREAM Mini is simple enough. All you have to do is turn it on along with your device’s Bluetooth. Set it for discovery mode and it should automatically find the speaker. If not, hold down the play button until it shows up. Once it appears, just click on it to connect. Once it’s connected, all audio from your device will now be streaming to the BoomSTREAM Mini.

Controlling the BoomSTREAM Mini is also just as simple. Basically start playing whatever music you want on your device first. It will start playing on the speaker. From here, you can adjust the volume on the speaker itself which is separate from the volume on your device. Hold down the + or – button to increase or decrease the volume. You have to hold it down though. Tapping it doesn’t work as tapping the buttons switches tracks. For example, if you’re using Pandora, rapping the + button will skip to the next track. If you want to pause the track, just press the play/pause button and press again to resume.

Sound from the BoomSTREAM Mini is incredibly crisp and loud. For instance, I was upstairs in a room and had it cranked all the way up and my wife who was downstairs in the kitchen could hear it. It pumps out some really good highs and mids though the bass isn’t as deep as you would find on larger speakers. Still pretty good though, especially for the size.

There wouldn’t be much really that would need improving on this speaker though I can think of a couple additions I would love to see in an updated speaker if Scosche chooses to. I would love to see a built in mic so it could also be used a speakerphone as well as maybe having this thing completely constructed out of aluminum and ditching the plastic. Other than that, the BoomSTREAM is an absolute joy to use and carry around thanks to its small size but big sound.

The Scosche BoomSTREAM Mini is available now for $49.95 and can be purchased in 4 different colors. It also includes in the packaging a USB cable for charging as well as a 3.5mm to 3.5mm AUX cable for use with devices that do not have Bluetooth.