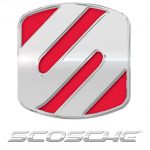 When it comes to essentials, these two items are rarely ever mentioned yet they are two items that many people just buy without a thought. I’m talking about sync cables and car chargers. For one, most people never think about getting another sync cable because their devices usually already come with one but that doesn’t mean you can’t find a better one. As for car chargers, most people just buy whatever they can find at the time. Most people just pick up something random, but there are better options out there. For example, Scosche is one of the first companies to release Apple certified Lightning cables and chargers with their StrikeLINE Pro and StrikeDRIVE and both are high quality products. 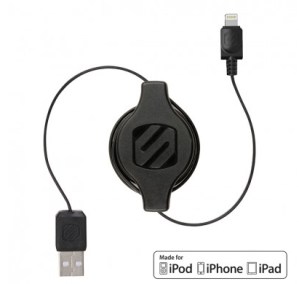 Using the StrikeLINE Pro is really simple too. Just grab both ends and pull. Extend out to as long as you need and release. It will lock into place at the length you set. When you are done, just pull both ends again and it will unlock and retract back into the storage housing.

I’m the type to carry quite a bit of cabling with me in my bag and yes, it’s always a hassle having to unwind cables and then wind them back up when I’m done. It’s also even more of a hassle when I have to untangle several cables from each other. With the Scosche StrikeLINE Pro, I no longer have to worry about that.

You can pick up a Scosche StrikeLINE Pro here for around $24.99. Yes it costs a bit more than the official Apple Lightning cable, but this is way more convenient and easier to take with you especially if you carry around a bunch of different cables. 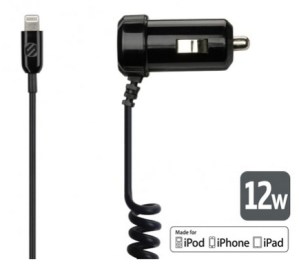 Another item from Scosche that should be on everyone’s have list, especially if you drive a lot, is the Scosche StrikeDRIVE 12W. This is a Lightning car charger that supplies 12Watts of power. That means it will power all the latest Apple devices including the iPad 4 and iPad Mini. I actually prefer using the car charger over charging my device at work on my computer because I don’t like having to pull my cable out and then maybe forgetting to put it back in my bag at the end of the day. With the StrikeDRIVE, I just leave it plugged into by car’s power outlet and leave it there. When I get into my car at the end of the day, I can just plug in my iPhone and get a quick boost of power to get me through the rest of the night until I can charge it again when I get home.

I will say that the Scosche StrikeDRIVE does look pretty good, even though it’s something as simple as a car charger. I like the slim. low-profile head design which keeps it from looking out of place in your car as well as the slick looking blue LED light that lets you know power is running through it. The charging cable itself is coiled which means it looks pretty short, but in reality it is a full 3-foot cable. The cable stays neat and compact and expands as you need it to.I prefer this over the regular straight cables as it means the cable isn’t all over the place because it’s too long. This keeps the cable neat and tidy.

The StrikeDRIVE 12W is available here for around $29.99. It’s a good investment especially if your a heavy iPhone or iPad user and this provides enough juice during your drives where you don’t have to worry about running out of power.

Though you can buy cheap sync cables and car charges, why would you? Knockoff Lightning cables don’t always function the way they are supposed to and the StrikeLINE Pro isn’t an ordinary sync cable. I like how they differentiate their product by making it a retractable cable that makes it easy to carry and store when not in use.

As for the StrikeDRIVE, I like the fact that it is black and not white like the standard cable. That means that when it’s plugged into your car, it doesn’t stick out like a sore thumb. Same with the fact that it is a low-profile charger making it a bit more stealthy with the only indication that there is a charger there being that of the blue LED light.

Both these products from Scosche are very good and though there are other alternatives out there, consider these when choosing a good sync cable and car charger.