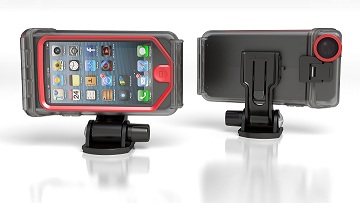 If you owned an iPhone 5 and you wanted to get on of those rugged Optrix cases, you were basically out of luck as they were only available for the iPhone 4 / 4s models. Well, that’s no longer the case as Optrix today announced the new XD5 for the iPhone 5. It offers the same protection and features as the old model, but with some improvements. The new XD5 is thinner, lighter, and stronger and now offers a second door to access the charging port and headphone jack without needing to remove the case. It also now features an interchangeable lens system as well.

They are displaying the new XD5 at CES which will retail for $129.95 and is available for pre-order now.

Optrix’s XD5 camera case is made with a thinner, lighter and stronger body when compared to the acclaimed XD Sports Case, but possesses an even higher waterproof rating.  In addition, the XD5 incorporates a second door to access charging connectors and headphone jack, has an interchangeable lens system and can be removed from the mounting system.

“Optrix delivered the industry’s first action camera case for iPhone 4/4S and we are now unveiling the first for iPhone 5,” said John Willenborg, founder of Optrix.  “Our new line of products reinforces our commitment to providing video capturing solutions that meet and exceed the needs of every extreme athlete.”

On display at the Las Vegas Convention Center North Hall 3337 from January 8th to 11th, Optrix will also showcase their acclaimed XD Sport case for iPhone 4/4S and iPod Touch, along with its complete line of accessories including the Super Sucker, the world’s strongest suction cup; Suction Cup with multiple pivot points; GlidePro: Monopod and more.

About Optrix
Optrix is a designer of military grade action sports video cases for iPhone 4, 4S and iPod Touch that enables capturing in all environments while taking advantage of the iPhone 4S interface and advanced video capabilities.  Optrix’s team of extreme sports athletes includes race car drivers, skateboarders, mountain bikers and surfers, and is committed to becoming the leading provider of extreme filming smartphone cases.