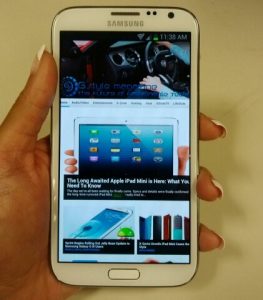 The era of the smartphone is defined with rules and expectations in its category. As consumers we expect certain specs and qualities from our smartphones. Anything less than standard is considered low quality or midrange. All of our standard quality smartphones have a touch screen; dual cameras; media player capabilities, etc. What’s the next step in innovation? How can manufacturers change the smartphone we are all so used to?

Let’s be honest; when the original Samsung Galaxy Note came out; most of us (including myself) thought it wasn’t the brightest idea. I’m sure most of us were thinking “A phone with such a big screen? Bringing back the stylus? That will never catch on! No way!” How can the stylus be an asset instead of a nuisance? This phone was pushing it in more ways than one. It had a tough crowd to earn since Samsung had already pushed its “regular sized” smartphones with screens that were already larger than usual.

Slowly the idea caught on and the Samsung Galaxy Note phablet became popular. In fact it became so popular that it sold over 10 million units. The phablet was so well received that it took less than a year to announce its successor; the Galaxy Note II. With the release of the Korean company’s flagship Android phone; the Samsung Galaxy S III (earlier in the year) ; the Android crowd adapted to a larger screen with ease. Did this mean consumers would praise the 5.5 inch phablet follow-up?

Why Get a Samsung Galaxy Note II?

The Samsung Galaxy Note II is for the creative consumer. It’s geared to those of whom productivity on the go is the most important. It is easily one of the biggest smartphones out there. With specs to follow! Taking a cue from the Galaxy S III; the Note II is offered by all four major carriers (Verizon, AT&T, Sprint and T-Mobile). Is this phone worth the $299.99+ price tag (T-Mobile is $369.99)? Or is the Note overdoing it in size and features? 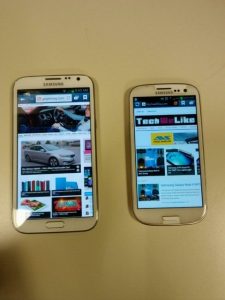 What’s odd about the Note II is that it looks more like the S III than the Note I. It has the same plastic build the S III has; surrounded by the chrome border. Many consumers won’t approve of this “cheap quality”. I have the S III and the plastic build has not been a problem. Like I stated in my S III review; the plastic helps the weight of the phone. With its curved back; the Note doesn’t fit badly into your hand. The grip is better than I thought. It fits comfortably in my hand. I’ve yet to drop it! You must also keep in mind that it’s not exactly a phone. Samsung thought ahead when it came to one hand operation of the Note II; you can adjust this in the settings. There are certain things you can do to help one-handed operations; such as keyboard and keypad side adjustments (pushes it to one side of the phone). But theres’s no help to reach the top of the screen one handedly. The phone is nearly 6 inches long (5.95″); so I assumed one-handed operations wasn’t going to be the usual. I was used to the Galaxy S III; and now I had to adjust my grip again.

The Note II has a dedicated home button at the bottom center; with the back button to its right and the menu button to its left. When long pressing the home button you can see the recently used apps like usual. It also gives you the option of looking at what’s currently active as well as a quick link to Google Now. At the top of the phablet you have the LED sensors and the 1.9 megapixel front-facing camera. On the chrome border to the right; you have the standby/power button. The left chrome border has the volume rocker. Again no dedicated action or camera button on either border. I thought a phone so large; should have that option. The back panel has an 8 megapixel camera, flash and speaker. 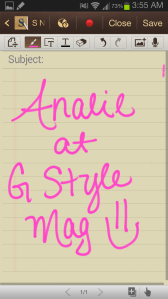 The display is pretty. It’s a notch down from the Note I at 1280 x 720; but it no longer uses Pentile screen. You could barely notice it (of course unless compared side by side with other screens). The Note II has great viewing angles. The screen is smooth and pleasant to look at when liking Instagram pictures or watching a video. What is special about the Note II’s display is the Wacom technology that works with the S Pen. The display senses when the stylus is in close proximity to the screen. It’s the little details that count.

Samsung didn’t disappoint when it came to internals. What makes this phone better than most is the fact that they didn’t strip the US version from the 1.6 GHz quad-core Exynos processor. I remember being upset when the international version of the S III had a quad-core processor; but when it came to the US it was stripped down to dual-core. Moving on, the Note has 2 GB of RAM; which makes for smooth navigation and operating. You can purchase the phone with up to 64 GB of internal memory. It has a micro SD slot for up to 64 GB of additional memory. It’s also NFC capable; with dual band Wi-Fi, and Bluetooth 4.0. If you’re getting this phone for AT&T or T-Mobile it requires a micro SIM card. The phone ships with Android Jelly Bean 4.1. I couldn’t wait to use Google Now! 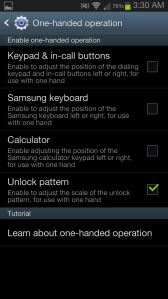 I have been using the Galaxy Note II for several days. After using the original Note for about a month; I was sold. I couldn’t wait to try out the Note II. It seems that Samsung has improved all the short-comings of the original phablet. Setup was easy. I think I can set up an Android phone in my sleep. I’ll start by saying that I didn’t know what to expect from the Note II’s battery life. A phone with such a big screen and so many features; I have to be honest I didn’t expect the battery to last too long. I abuse smartphone features to say the least. When on the go; I manage three Twitter accounts, three Facebook accounts, three Google plus accounts, Instagram, Gmail, GTalk and constant texting. I was newly obsessed with Google Now as well. Besides socializing I have grown addicted to Spotify. I started exploring the many uses of the stylus with the phone as well. I mean; isn’t that the point of the Note series? In short; this phone never caught a break. I was really pushing its 3100 mAh battery. With all my use; the phone lasted over 11 hours before I needed to recharge. I was pleasantly surprised.

Samsung introduced many features with the Galaxy Note II. Page Buddy is one of them. It’s an intuitive pop-up feature that brings up a page depending on your actions. Whether it’s removing the stylus, plugging in headphones or connecting the phone. For example when plugging in headphones; a page pops up with media player controls. I simply love this feature.

Galaxy Note II Camera
I am not much of a photographer. I can’t talk much lighting and flash etc. I am more of a smartphone photographer. The 8 megapixel camera on the Note II was more than useful. It has many of the features that were introduced with the S III such as Best Photo, Buddy Photo Share, and Burst Shot. The images were pretty and crisp. Autofocus always comes in handy; and works rather well. There is a new feature for those who are playful with their smartphone cameras. Live filters known as “effects”; such as Sepia, negative and my fave Cartoonify are now options when snapping away! My favorite camera/video feature will of course be the ability to capture stills while recording.

S Pen / Stylus
Samsung has been talking about the vast improvement of the S Pen. When you remove the S Pen from the Note; the phablet immediately takes notice. Makes a “detaching” noise (along with vibration) to notify you. You can set up “Page Buddy” options that will bring up S Pen options when the stylus is detached. You can also have Pop-Up Note open when detaching the S Pen. 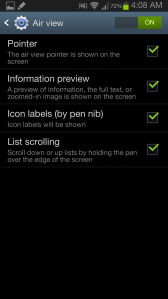 There is a little target dot that shows where the stylus is hovering above it (called Air View). I find that when I remove the S Pen, i find myself using it more than I thought. It’s just so helpful and writing with a responsive stylus never stops being fun. The S Pen is very responsive. The handwriting recognition feature really read my handwriting. I was shocked. That’s definitely something you must try when demoing the phone before a purchase. I went on a “writing” rampage for a couple of hours. S Pen responsiveness is definitely an improvement over the original Note’s.

Another way to be productive with the S Pen is to use Quick Command. Quick Command can be opened by swiping upward while clicking the S Pen. You can write in symbols to perform actions such as an Internet Search, jump to the keypad to make a call, or the message composer to type a text message.

Android Jelly Bean 4.1
This is my first time using Jelly Bean. After using it for several days; it’s hard to go back to Ice Cream Sandwich. Like I always say; it’s the little things. The notification bar for example allows you to share or edit a screen shot without having to open the image. It also shows you a more detailed inbox when receiving email notifications.
The highly anticipated Google Now is fun to play with and has all my information at glance (weather, traffic, sports scores, etc.). Something I noticed when using Twitter on the Galaxy Note II is that I can see an Android version of iOS emojis icons. Very weird but cool. I will look deeper into that. 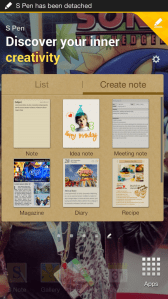 Is the Galaxy Note II Worth Taking Note Of?

I’ll admit that when Samsung announced that its phablet was getting bigger; I thought it was downhill from there. I was sure they were pushing the limits over the extreme. But like with the original Note; all you need is some time and getting used to. The S Pen becomes a valuable asset to everyday work and play. Whether it’s pointing out something on a graph or just doodling on a friends picture; you’ll be glad to have the stylus in your pocket. The Galaxy Note II is a significant upgrade over the original.

The size will become at nuisance at times. There were times when on the train where I had to keep readjusting my grip to get something done on the phone. It’s not always the most comfortable. Not all tasks can be done comfortably one-handed.

With smoother use; longer battery life and improved S Pen integration; this phone will define the phablet category again. Don’t be surprised when you start seeing the phone around more than you think. Its practical combination of tablet and phone in one will have many consumers making a logical decision. You are killing two birds with one stone when purchasing this device.