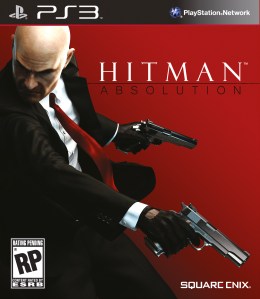 HITMAN: Absolution follows the world’s ultimate assassin, Agent 47, as he takes on his most dangerous contract to date. Betrayed by those he once trusted and hunted by the police, he suddenly finds himself at the center of a dark conspiracy and must embark on a personal journey through a corrupt and twisted world.

This is another game I was able to play at Square Enix press party at New York Cities Comic Con. Now id you are not familiar with the HITMAN series I’ll give you a short recap.

The series revolves around Agent 47 (usually simply referred to as “47” or “Mr. 47”), a cloned assassin-for-hire, whose flawless record places him in high demand among the wealthy and elite. The Hitman series permits the player to kill targets (or non-targets) in a variety of ways, using firearms, melee weapons, or even conventional objects that 47 picks up (such as shovels, fireplace pokers, pool cues, etc.). In Hitman: ‘Contracts’, melee weapons such as knives can be used to kill in more than one method, including forward stabs, horizontal throat slitting, frontal slashes, repeated stabs under the rib cage, or thrusting the blade into the carotid artery. The series is know for being ex-termly violent and players have had mixed feeling about the game play.

Agent 47 storming a safe house, and confronting Diana while she is showering. 47 is “betrayed by those he once trusted and now hunted by the police, he suddenly finds himself at the center of a dark conspiracy and must embark on a personal journey through a corrupt and twisted world, in his search for the truth”. At least one portion of the game will be set in Chicago, and the game will take place in the United States. Hitman: Absolution is set at the end of the timeline. Confirmed plot details include series protagonist Agent 47 assassinating his former International Contract Agency handler Diana Burnwood early in the game and the antagonist is Blake Dexter, a new character to the series.

Now when I was playing the game I entered a room where my enemies were talking, as I sneak in the room hiding behind a counter, now I marked each of my enemies with out them seeing me when I got up, both my guns went off and destroyed all of them, the last enemy to go down had a slow motion effect to it…Nice. I got so excited and forgot that I was at a press event and not at home, that one of the PR reps from Square Enix laughed and said “Glad to see that you are enjoying the game”

Agent 47 in older games was limited; he couldn’t jump, scale walls, or mantle up ledges (there are a few pre-scripted places where he can jump from one balcony to another, but these are very rare). This generally limits the player to a single plane of movement, although he is often presented the opportunity to move to higher or lower areas through the use of ladders, stairs, elevators, or hills, but in this game Agent 47 is able to perform those task with out a problem, he has more freedom to do so.

The amount of violence in this game is nothing new to the HITMAN series, which is great, I was running behind people shooting them in the head, the feeling of sneaking up behind someone and destroying them always makes for a good game. HITMAN: Absolution gives you that feeling like you are in the game.

Here are four major parts of the game:

One of the key elements to all Hitman games is freedom of choice. With the introduction of IO interactive’s Glacier2 tech, this is realized this like never before, giving players increased options and greater playability.

When building Glacier 2, IO Interactive focused on developing a comprehensive intelligence spectrum – something which sets Hitman: Absolution apart from other games. IO have replaced the trial and error gameplay giving the player much clearer feedback to their choices without penalizing them for exploration.

A new feature in Hitman: Absolution is Instinct. This manifests itself in a number of different ways and allows the player to see the world through the eyes of Agent 47. It’s a dynamic economy that is earned by executing classic Hitman gameplay moves.

Disguises have always been a central feature in the Hitman universe, in Hitman: Absolution IO Interactive has taken this feature to the next level with a huge variety of disguises which players can take, not only to blend in visually but also to impersonate a victim.

CONTRACTS is a new online mode which allows gamers to create and share their own custom hit challenges within the HITMAN: ABSOLUTION game. Choose a level, targets, weapons and then set your rules for completing your contract based on time, style and witnesses. There are no clumsy editors or complicated mechanics to learn; in CONTRACTS you simply play to create, and as CONTRACTS is an asynchronous mode, you can compete against friends at any time, regardless of whether they are online. HITMAN: ABSOLUTION will also ship with many pre-set CONTRACTS, each designed by the very best assassins at IO Interactive.

CONTRACTS is new to the series, it was inspired by loyal fans, many of whom are still finding new and amazing ways of taking out targets in previous Hitman games,” said Christian Elverdam, gameplay director for HITMAN: ABSOLUTION. “CONTRACTS mode finally delivers a way for Hitman players to fully realize both their creativity and competitive nature. Whether they’re fighting to shave off a split second from their time or combining elements and timing events to create unprecedented accidental deaths, gamers can now challenge and inspire each another with an endless variety of user-generated contracts.”

Upon accepting and successfully completing a contract, players will be rewarded in contract dollars with the amount depending upon how well they performed. In order to create more elaborate and creative setups, the player can choose from a vast arsenal of weapons, disguises, upgrades, and techniques; all of which can be unlocked by either playing through the story mode of HITMAN: ABSOLUTION or by spending those hard-earned contract dollars. I did get to see “Kings of Chinatown” in Contract mode which had a great look to it, it’s basically a “Play to Create” you can do your own custom hits, you mark your own target, which weapon did you use to kill the target, this will allow other players to see how you set up your personal contracts, Others will be able to play the contracts you make up.

Now they are three simple rules for Contract Mode:

1. Kill the target
2. Escape with out being caught (By any means necassary)
3. Get paid

I’ve hear from a couple of gamers that they had mixed feeling about the previous HITMAN game, I will tell you this the game runs smooth, the graphics are great, the game play is insane the add on’s like Contacts give you more of a hands on feel. I know you guys have seen the video with the nuns if not I’ve in included in the post, after watching…tell me this game is not going to be hot!