Everywhere you turn you will find a whole new line -up of gaming headsets, Form Turtle Beach, Astros to Steel Series. As you guys know these headsets are not cheap and speeding $200 and up on headsets is not something we really want to do.

The TRITTON 720+ 7.1 is white with the TRITTON logo written in black on the top, on, the right and left side of the headset have the “T” logo in orange that light up when turned on. The 720+ have the over the ear design which means they rest comfortable inside the earcups, this also allows for better sound. The Dolby digital decoder box is white and black with a port to attach the In-line audio controller. You also have a power button on the left hand side, which turns on the decoder box and headset.

720+ has amplified 50mm speakers with neodymium magnets, which mean you get a crisp rich base. I will say the sound is amazing, gives you that movie theater sound. The decoder box headphone provides 7.1-channel surround sound to enhance directional awareness and create a detailed, which sounds as if it’s beyond the limits of the headset. Hearing each and every disturbance in a game’s environment. I will say this the headset is extremely powerful I’ll tell you why. I usually have the volume on my headset to the highest it can go (yes I’m going deaf, or some of you just whisper on the mic), with the 720+ the volume was half way, my friend started to speak and I had to push the headphones off my ears, that’s how loud he came off, your best bet is to have the volume on low or you will end up yelling at your friend like I did.

The inline controller features a microphone mute switch that just moves up and down, and a master volume and mute switch which is a rocker that you flick up or down to adjust the volume – or press in to mute all sound. One of the other new features is the SVM or Selectable Voice Monitoring which lets you decided whether or not you hear your own voice through the headset (I hate my voice so that’s a good feature). 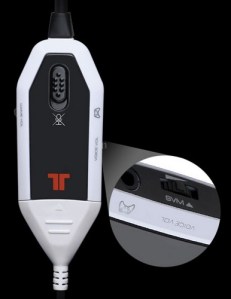 I love how powerful the mic is, while talking on the mic I was asked to stop yelling, which I wasn’t I had to put the mic away from my face just so the can here me at a normal volume. The mic is also detectable so if you want to use the headset just to watch a movie or listen to music you can do so with out the mic in the way.

Thank god this headset is durable, I got caught up in the wires trying to run and get a drink before the next round started and nearly killed myself, the headset flew off and ended up stepping on them.

Now with that being said I’m not a big fan of wires, as you can see why. I have a wireless Xbox controller which is great but you all know I play mostly fighters which means I’m on a fightstick which is wired.

I’m a fan of TRITTON headsets the sound on the 720+ is amazing, setup took a couple of minutes nothing crazy, the headset is a little heavy. The only problem I have is of course the wires. I’m constantly telling my team “give me a minute let me untangle myself”. I think the 720+ is a great edition to the TRITTON family but in MY opinion I like the Wareheads better.