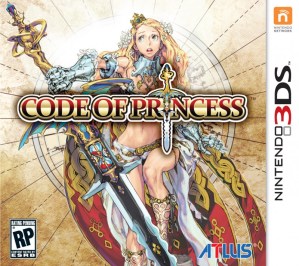 I’ve been looking for a good RPG to play, and I think I finally found one with Code of Princess, an action RPG brawler for Nintendo 3DS with cooperative and competitive multiplayer.

Slated for release this fall, Code of Princess offers players an exciting yet unconventional hardcore experience, deftly blending fighting gameplay with components from classic arcade side-scrolling beat ’em ups and the character development and customization of an RPG.

Up to four players can take on challenges cooperatively or battle against one another in competitive play. Both modes are available locally or online via Nintendo Network.

“Developed by an all-star team of industry veterans, Code of Princess is unlike anything else available for Nintendo 3DS,” commented Tim Pivnicny, Vice President of Sales and Marketing at ATLUS.

“Fans of action will savor the game’s combat, which is loaded with satisfying chain attacks and plenty of depth-both in terms of attack options and also quite literally in the sense that battlefields employ a three-railed design, letting players move forward and back as tactics dictate. Fans of RPGs will relish the ability to level and improve their characters, converting their gained experience into boosts for the stats that best suit their play style and tactics.

This appealing amalgam of game designs is wrapped in a beautiful package, boasting lovingly rendered and animated characters and eye-catching flurries of punches and kicks. With something for virtually every kind of old-school gamer and with an esteemed pedigree to draw upon, Code of Princess is certain to be one of the most anticipated Nintendo 3DS games of the year.”

In keeping with proud ATLUS tradition, fans who pre-order Code of Princess (at a participating retailer while supplies last) will receive the Code of Princess Sound & Visual Book, a collection of art work from famed designer Kinu Nishimura and music from ACE’s stellar soundtrack that are the perfect complement to the game and a wonderful collectible to proudly display.

I actually looking forward to play Code of Princess, even thinking about getting the bundle.