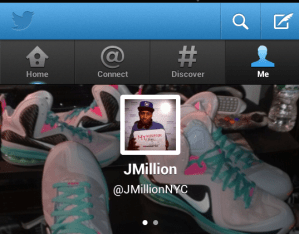 As mentioned earlier Twitter has been updating its native apps for the Android series of devices as well as the iOS series. With this new update it now gives you profile headers which you can see on your device as well as the desktop versions of these pages on the Twitter.com site. Twitter says its supposed to make your profiles mean more as far as displaying what your profile means and such.

I remember at one point they were doing “branding” but eventually did away with that. Lets see how long this stays up. It just seems like they are taking a page out of Facebook with their cover pages and various changes going on.

I do like the Photo streaming that’s on the devices as its easier to look at photos. This was usually a cumbersome task before. It looks nice on my Android device. The pinch to zoom feature didn’t seem to work for the stream. I haven’t tested out on my tablet but reading various reports have stated the header can look a little bad too. I can imagine that will be cleaned up in the new update.

New profiles now feature header photos so you can express who you are more meaningfully on Twitter. Upload an image from your mobile device and see the same beautiful profile design on your phone, tablet or computer. Read more about the new profiles.

Photo streams for profiles display the images people have shared on Twitter. Whenever you see a photo stream, swipe left or right through the thumbnails or tap to view photos in full-screen mode. Android users can also get closer to photos with pinch-to-zoom.

Jason Millionhttp://www.jmillionnyc.com
Jason Million is Deputy Editor In Chief. Jason currently uses a OnePlus 8 Pro with T-Mobile among other gadgets. Hailing from the streets of NYC, always trying to have a blast or catch a bite to eat. Enjoying technology to the fullest. Any other questions hit him up.

After all the praise OnePlus got from its 8 and 8 Pro models earlier this year, OnePlus...
Read more
Always Mobile