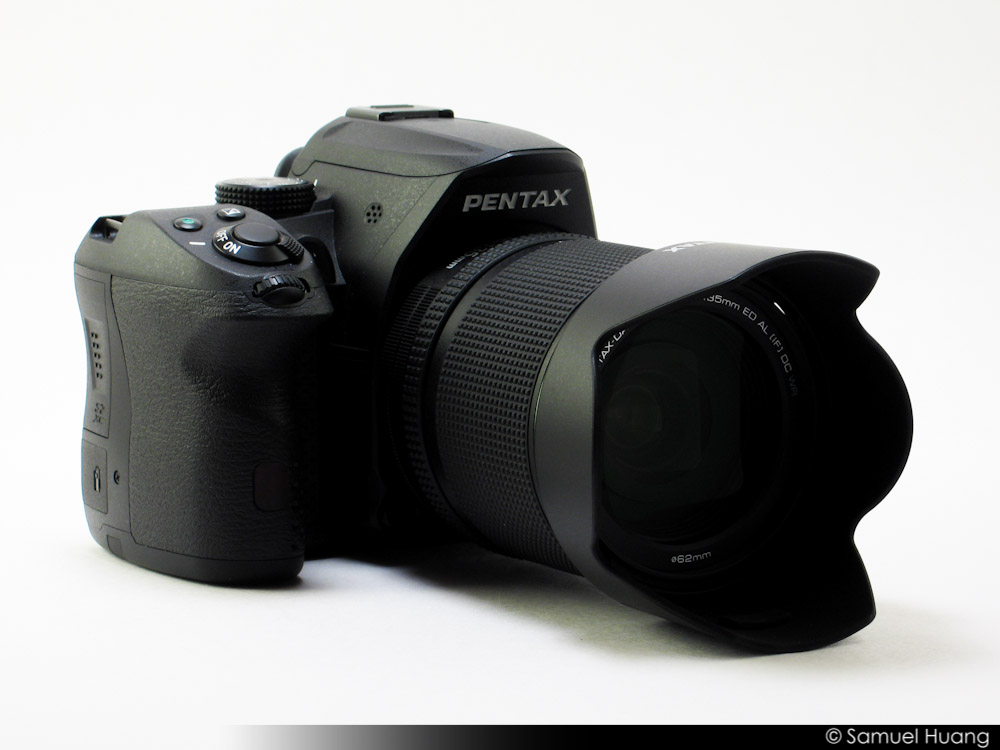 Over the past couple of years, mirrorless, interchangeable lens cameras have really risen in popularity thanks in part to their small size, DSLR-like features, and superb image quality. But does that mean the death of entry level DSLRs? Not necessarily and the PENTAX K-30 is a good example of why the DSLR still has life in it. Unlike mirrorless cameras, the PENTAX K-30 has an optical viewfinder, something most mirrorless cameras lack. It also has a very large selection of lenses, in this case, the PENTAX K-mount lenses which span over 35 years so there are no shortage of lenses out there for it. However, what really makes the PENTAX K-30 stand out, and this is something not found in any other entry level DSLR or mirrorless camera at this price point, is that it is completely weather sealed making it also dustproof and coldproof.

Like with all our other camera reviews, I’m starting out with a hands-on preview first which is mainly just an examination of the body and lens. I’ll get to the full review in a future post once I’ve been able to out it though some real world usage and not just studio time.

This will be the first DSLR I’m actually reviewing on this site as most of the other cameras that have been featured here have either been point-and-shoots or mirrorless interchangeable lens cameras. I know some of you still prefer big, bulky DSLR cameras and most camera manufacturers still make entry level DSLRs that are very competitively priced with smaller mirrorless cameras so a DSLRs still have a certain appeal to them. On that note, most people pick up either Nikon D3200 or the new Canon T4i as those are probably the two most well known brands on the market, but what I have here is something much different and in my opinion, very special. Today I’ll be taking a look at the PENTAX K-30 with a full review in a couple of weeks. Like all my other hands-on previews, I’ll be concentrating on the way the PENTAX K-30 looks today and how it feels in my hands.

Let’s start off this review with the obvious. The PENTAX K-30 is very large, especially when compared with all the other cameras I’ve looked at this year. It’s about as large as a regular DSLR but has a more angular shape to it with less rounded corners. This is probably the biggest thing people notice about the K-30 and it might not appeal to everyone. In my case, I quite like it and even though it has a lot of sharp corners, it’s comfortable to hold in your hands. 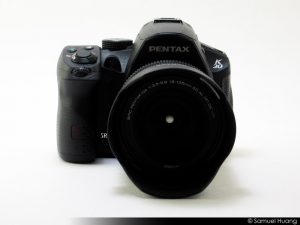 The front of the camera is pretty standard for a DSLR. The hand grip on the left is very large and has a very nice rubbery layer on top of it. On the grip itself is also an IR sensor for remote shooting. To the right of the hand grip you’ll find the AF-assist light. The location of which shouldn’t be a problem for most people and your fingers shouldn’t block it unless you are somehow holding the grip in a strange position. Obviously the most prominent part of the front of the camera will be the lens, in this case, PENTAX provided me with the 18-135mm DA lens that is available as part of the kit purchase. Like the previous PENTAX K-01 I looked at, the lens mount is tight meaning that once the lens is on, it feels quite sturdy as if it is part of the camera’s body. This is a fairly large lens and extends about 3=inches from the front face of the camera when collapsed. When fully extended, it is about 5-inches long and 6-inches with the lens hood on. It is a very well made lens though with smooth motion. The focusing ring is on the bottom portion of the lens however which is opposite of what I’m used to, but it’s actually not bad in this position and means I don’t have to extend my fingers out to reach it. 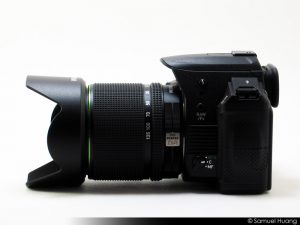 Rotating the camera clockwise to the side, you can see how thick the PENTAX K-30 is. I’m not surprised by the thickness as the K-01 was also pretty thick, and that didn’t even have a mirror on the inside. On this side, you’ll see that PENTAX added quite a few buttons and switches here to give your left hand something to do. On the top portion is the popup flash button which is where it should be, in easy reach of your thumb. Below that is a RAW/Fx button which lets you automatically switch to RAW shooting mode or switch back to JPEG shooting. Right below that, there are a series of grooves cut into the which gives your thumb a place to rest as well as functioning as a touch guide so you know where the buttons are without looking at them. Right below the grooves, there is a toggle switch that allows you to switch focusing modes from AF.S, AF.C, and MF. To the right of all the buttons, there’s more rubber grip on the side as well as a hidden port door for Video/PC out. 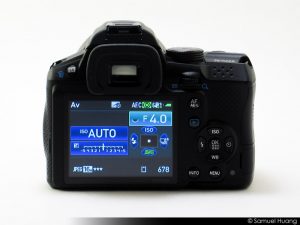 Moving to the back of the camera, there is a decently sized 3-inch screen, not widescreen format. It is used to display shooting information but can be switched to Live View so you can use it to shoot instead of using the OVF. The OVF sits right on top of the view screen. To the left is the LV switch which allows you to use the viewfinder for live view. There are certain features you can’t use unless you use live view such as the focus peaking feature and face detection. On the right side of the view screen and the OVF sits a host of buttons and dials. As per usual, most of the standards button are here so you’ll rarely need to go into the OS unless you are trying to change certain shooting features. Everything is laid out within thumb’s reach. Above all these buttons, there is also a really nice thumb rest with a portion of the camera that juts out which offers a better thumb hold on the camera. 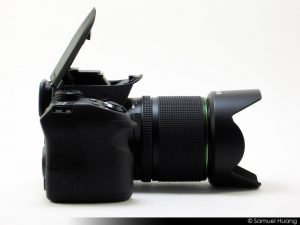 Rotating the K-30 to the grip side of the camera, I notice that PENTAX doesn’t extend the rubber coating all the way across the side. Instead, it just abruptly stops in the middle and then continues on with plastic. There are two doors located on this side as well. One door is for the SD card and the other door is for what I’m assuming is for a remote shutter release? I almost forgot to mention, because this camera is weather sealed, all doors and ports have a rubber seal around them when closed. This is to help keep water out. 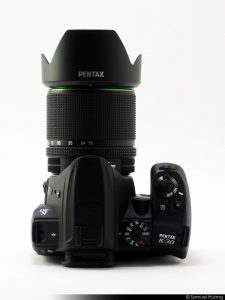 Moving to the top of the K-30, you’ll find even more buttons and dials. From this view, you can see just how far out the hand grip protrudes which allows for most of the buttons to be placed in this general area. That means that while holding the camera, you’ll be able to reach everything with your shooting finger. Up top you get another adjustment dial above the shutter release button which is surrounded by the power switch. Below this you get the EV button to adjust exposure settings as well as the “green” button  which honestly I have no idea what it does at this moment. To the left of all these buttons is the mode selection dial. There are a ton of different modes you can choose from on here and the dial itself has a really nice, solid click to it when turning. To the left of the mode dial is a rather large pop-up flash assembly as well as the hotshoe mount.

If we look at the underside of the camera now, you’ll notice that the tripod mount is placed directly at the center axis of the lens. This is usually the norm for more DSLR cameras. To the left of the tripod mount is the battery door. If you open it, you’ll notice that the rechargeable batter sits in a rather odd shaped hole. If you take the battery out, it becomes apparent that you can fit 4 AA batteries in this hole. However, that will do you little good as you need a AA batter adapter which is sold separately in order for it to work. 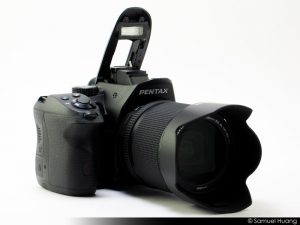 It’s been a while since I’ve handled a proper DSLR. For the better half of this year, most of my photography has been done with mirrorless cameras and point-and-shoots. The closes in size to a DSLR I got was probably the PENTAX K-01, and even that camera, while massive, is still smaller than the PENTAX K-30. However, as large as the K-30 is, I can’t say that I’m not pleased with what I see here. The camera is comfortable to hold, easy to handle, and very well balanced. All the little buttons and dials are very easy to reach use without having to take your eyes off your subject. Fit and finish on the K-30 also seems really top notch with no weird gaps or creeks in the body.

I will also say that even though the PENTAX K-30 is a typical DSLR, its strange, angular body does draw looks from others and so does the fact that it’s a PENTAX. In a world where most people you see are using either Canon or Nikon cameras, having something different does make others curious about it.

Well, that’s it for now. Stay tuned for a full review after I’ve had more field time with the K-30.